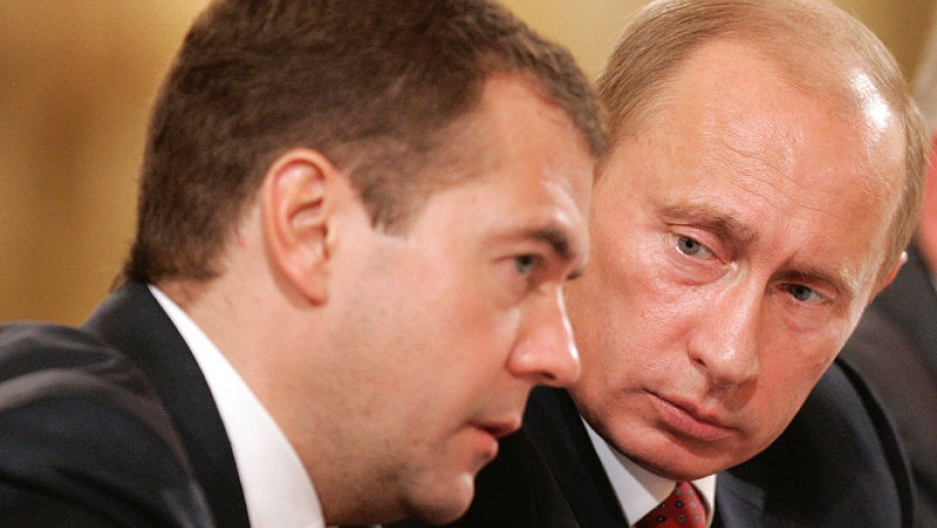 Ooh, did things in Russia just get interesting?

The country’s ruling duo (with Putin playing Batman to Medvedev’s Robin, at least according to US diplomats) appears to have had their first unequivocal public squabble.

This afternoon, Putin was asked what he thought about Libya during a factory tour. Putin loves the question: he smiles and says, “if you mean my personal opinion, of course I have one.” He goes on to call UN Resolution 1038, which authorized the body to use “all necessary measures” to enforce a no-fly zone over Libya, “defective and flawed.” “It reminds me of the medieval call for a crusade,” he said. “Russia did not vote for this resolution – it’s obvious this is military interference from the outside.”

Cut to two hours later and President Dmitry Medvedev, who, by nature of his office (if not his stature in the country), is the one who is supposed to be commenting on foreign affairs. “It is unacceptable to use terms that effectively lead to a clash of civilizations like the crusades,” Medvedev said. “I do not consider this resolution to be wrong, and in fact I consider that it broadly reflects our view of what is happening in Libya, although not across the board,” Medvedev said. “That is why we didn’t use our right of veto.”

Russia chose to abstain from the UN vote (like China, India, Brazil and Germany), rather than using its Security Council veto.

So: wow. Medvedev just totally slammed Putin. Undoubtedly, he was upset that his prime minister spoke first about the situation in Libya (these were the first comments from Putin and Medvedev since the military intervention began on Friday). At the turn of the year, Medvedev publicly criticized Putin for speaking out in the case of jailed oligarch Mikhail Khodorkovsky, but today’s criticism felt stronger and more clear cut. Their positions actually clash (and nicely show the two strands of thought inside Russia on relations with the West). Some will argue this was their usual "good cop/bad cop" routine -- one speaking to the domestic audience, one speaking to the outside world -- but the ad hoc-iness of it all makes me suspicious about that.

Presidential elections in Russia are less than a year away and the rumor mill is going wild on who will run – Putin or Medvedev? Or some unknown dark horse? There’s talk that the clans around Putin and Medvedev are fighting between themselves to get their candidate out there. This could be the first sign that Medvedev wants to stay on. Or he was just afraid of looking bad. Either way, it’s interesting stuff (if for nothing more than seeing someone yell at Putin which, really, never happens).