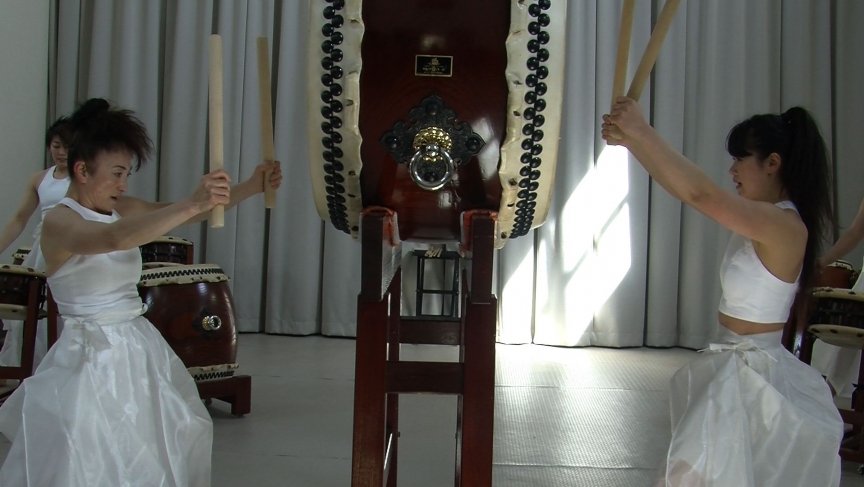 The all-woman Taiko group Hono-o-Daiko, which means "blazing drum," is from Hakusan City in western Japan.

In the days before Japan's earthquake and tsunami, an all-women's drumming group named Hono-o-Daiko was preparing to travel by bus to a concert in Fukushima, about 300 miles from home in western Japan.

Hono-o-Daiko, which means "blazing drum," was scheduled to perform the weekend after the earthquake struck.

The concert was canceled, and the drummers stayed in Hakusan City and watched non-stop coverage on television of the earthquake and tsunami disaster, including footage of the explosions at nuclear reactors in Fukushima.

Chieko Kinoshita, who joined the group eight years ago, said she is still in shock. "It's very hard to watch what's happening," Kinoshita said. "It hurts my heart to see it."

If the group had departed a day earlier, they would have been in the earthquake zone, but they have mixed feelings about escaping the tragedy.

"It's complicated," Kinosita said. "If we had been there, we would have been stuck in harm's way. But even though we were safe, we kept wondering what we could do to help."

Hono-o-Daiko has performed all over the world, but it's their performances in the tsunami-affected areas that they now recall. Several years ago, they played in Rikuzentakata, a small town on the northeastern coast of Japan that was completely wiped away by the tsunami. "It looks like everything there is gone," Kinoshita said, and it's likely that many of the people who saw the concert have died.

Hono-o Daiko formed about 25 years ago when female taiko drummers were a rarity. Akemi Jige, the group's founder, is 58. She said she's never seen such a disaster in her country.

"I feel helpless," Jige said. "I want to do something, but I can't. I want to give them power." The youngest member of the group, Mizue Yamada, is 25. She had many friends in the affected area in northern Japan. "I can't believe this is happening," she said. "I want everyone to regain their spirits soon."

The women teach students of all ages. One of them, Naoko Okada, 23, is from Kobe. She remembers when the Great Hanshin Earthquake hit her hometown in 1995, crippling the city and killing more than 5,000 people. She was in first grade at the time. "I know what it feels like and I understand what people are going through now," Okada said.

The drummers hope they can bring taiko to Fukushima when the area recovers. They want to perform a memorial concert for the earthquake and tsunami victims when people are ready.

"Right now, things are very hard for the people in Fukushima," said Jige. "If we could play the taiko for them with feeling, even for just a short time, we could give them a little bit of courage and energy. I would be very happy if I could help them."

The Japanese have a word, "ganbaru," which means to "fight on," or persevere. It will take a lot of perseverance, the drummers say, to band together to help their country get through this tragedy.