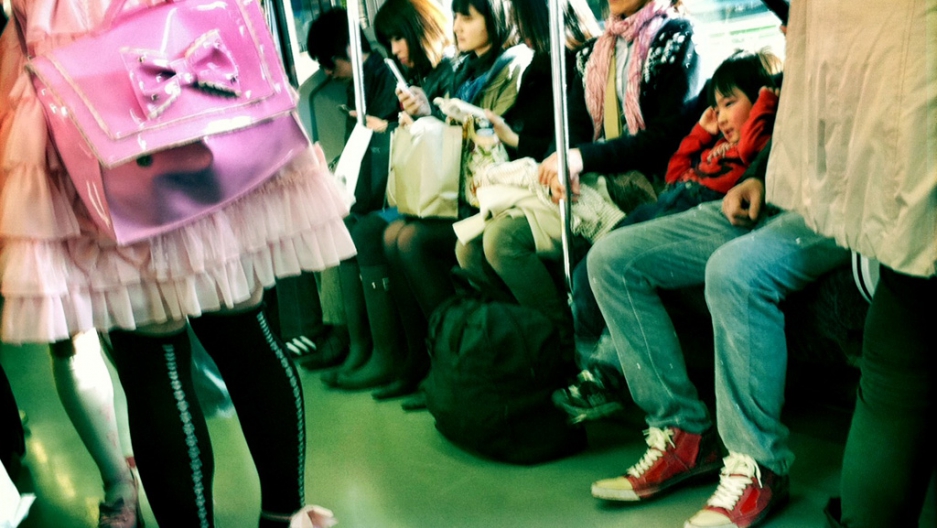 Commuters travel on a train on the Yamonote Line on March 20, 2011 in Toyko, Japan.
Credit: Adam Pretty
Share

OSAKA, Japan — Inken Trebbin, a German graduate student at a university near Tokyo, paced up and down the Osaka train station. Suitcase in hand, headphones in her ears and a worried look on her face, she pondered whether to head home to Berlin or stay put in Japan.

“I have no clue what to do. I don’t want to leave Japan, really, but my parents are worried,” Trebbin said. She came to Osaka, located 300 miles southwest of Tokyo, after her parents urged her to leave the Japanese capital.

Trebbin is one of the many who have left Tokyo in recent days, due to blackouts, food shortages, continuous quake aftershocks and a fear of radiation from the nuclear reactors in Fukushima, about 150 miles north of Tokyo. New reports of above-limits radiation found in spinach and milk in areas near the nuclear plants also worried many residents.

While some nuclear experts have said radiation levels in Tokyo are not high enough to be harmful to human health, many countries, including the United States, France and Australia, issued official warnings encouraging their citizens to leave Japan. Some countries chartered planes to fly their citizens out of Japan. The U.S. State Department offered flights to nearby Asian countries, and told U.S. citizens they would have to pay back the airfares later.

Trebbin has lived near Tokyo for six months, and she still has another year-and-a-half left in graduate school. “I’m worried that if I go home, I won’t be able to come back here,” she said. She decided to wait it out in Osaka.

Osaka has become a popular destination for many trying to get out of Tokyo, since it’s the third largest city in Japan and less than a three-hour train ride away. Some major airlines, including Lufthansa and Alitalia, announced the re-routing of flights from Tokyo’s Narita Airport to Osaka, turning the city into a major transportation hub.

Hotels have filled up in Osaka and some major U.S. chains, like the Ritz Carlton Osaka, are completely booked for at least the next week. “Since the earthquake happened, many residents in the Tokyo area are coming here to ask about accommodation for a few days or a week,” said Sadako Hayakawa of the Osaka Tourism Bureau.

A number of foreign embassies shifted operations to Osaka last week. The normally quiet Austrian consulate in a small Osaka office was bustling with activity last Friday evening. Jutta Stefan-Bastl, Austrian ambassador to Japan, said the majority of the embassy’s 30-person staff relocated to Osaka due to logistical reasons. They plan to stay put in Osaka until the end of April, she added.

“Austrian Airlines canceled their flight out of Tokyo Narita airport because the crew didn’t want to stay overnight in Tokyo,” Stefan-Bastl said. “So, we advised Austrians to go through Osaka.”

Electricity shortages in Tokyo and phone line outages also caused problems for embassy workers, who had trouble commuting to the Austrian Embassy in Tokyo. She said the staff felt much more at ease in Osaka, away from the uncertainties of radiation levels and more aftershocks.

However, Stefan-Bastl acknowledged people back home, who seem more worried than people residing in Japan, instigated some of the fear.

“People in Austria are calling their relatives in Japan and telling them to come home, since it’s so dangerous,” she said. “On the ground, we have better information, and we are more relaxed.”

According to Stefan-Bastl, Austrian residents in Japan number about 500 to 600 people, and one-third flew back to Austria after the earthquake. Another one-third left Tokyo for Osaka and cities further south.

Drew Anderson, a Californian who has lived in Tokyo for three years, arrived in Osaka a few days ago without a definite plan. A graphic designer at a Tokyo-based video game company, Anderson said he left Tokyo when he heard about higher than normal levels of radiation at Tokyo’s Shinjuku train station, the world’s busiest railway station which serves more than 2 million passengers a day.

“I’m inclined not to believe the government,” he said, and added that Japan’s government had been slow to reveal complete information regarding radiation levels around Fukushima’s damaged nuclear power plants.

Anderson said many of his co-workers also left Tokyo, and took bullet trains to Osaka and other parts of Japan. Anderson finally found a room for a few nights when a friend he made through Mixi, the Japanese version of Facebook, offered him a place to stay.

It’s not just foreign residents who have decided to leave Tokyo. Some Japanese families said they planned to stay in the Osaka area until things improve, mostly because they were worried about radiation affecting their children.

Yoko Takayama arrived in Kobe, a port town 20 miles from Osaka, late last week with her husband and 3-month-old baby. “They say babies are much more vulnerable to radiation,” Takayama said.

She and a group of her Tokyo friends — all mothers with young children or mothers-to-be — said they might rent a house in the area, so they could stay longer.
When she left Tokyo, Takayama said she saw huge crowds in stations and limited public transportation. “We don’t know what’s going to happen. There might be another huge earthquake in the Kanto region,” she said, referring to the area where Tokyo is located.

Also, a number of companies and non-profits in Tokyo temporarily closed for business or moved operations to Osaka. A group from a Tokyo-based non-profit set up a makeshift office in Osaka last week. They said power failures debilitated Tokyo's public transportation system, so people could barely get around the city.

“We were unable to continue our operations in Tokyo,” said Yuki Hirayama, one of the group’s coordinators. When phone lines went down in Tokyo, it was the last straw. However, Osaka proved a welcoming city, and the non-profit has successfully fundraised for earthquake relief efforts in front of Osaka station for several hours a day.