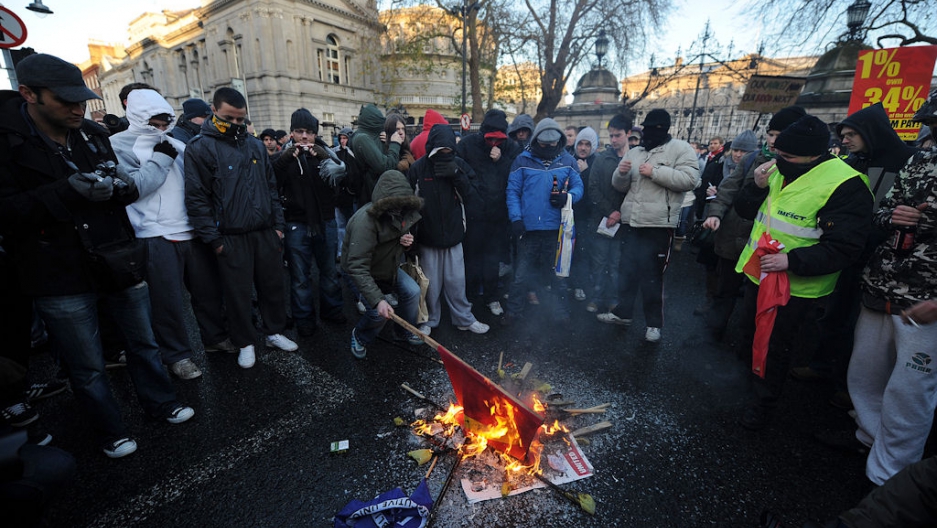 About 50,000 Irish people took to the streets on Nov. 27, 2010 to oppose savage cutbacks needed to secure an international bailout. During Ireland's tough economic times its suicide rate has skyrocketed, with young men the worst affected.
Credit: Ben Stansall
Share

DUBLIN, Ireland — One cost of the recession in Ireland is a surge in suicide rates, particularly among young men in rural areas facing a bleak future without work and laden with debt.

Since the end of Ireland's good times three years ago, the country's incidence of death by self-harm, already one of the highest in Europe, has risen by a quarter, according to official statistics. Some 520 people took their own lives in 2009, a 25 percent rise from the previous year, and provisional figures for the first quarter of 2010 show that just as many died last year.

Almost everyone in Ireland it seems — and even occasional visitors like former U.S. President Bill Clinton — knows of a family where a member has committed or attempted suicide.

Clinton told an audience of Irish Americans at a St. Patrick’s Day function in New York about his own personal experience of the damage done to the Irish psyche by the financial catastrophe that has wiped out many businesses.

“The thing that has troubled me most, believe it or not, about this whole economic crisis in Ireland has been the rise in the suicide rate, not just among the young where it was already too high but among those in their prime working years who feel somehow that their whole lives have been robbed,” Clinton said.

“A good friend of mine was one of the young, phenomenally prosperous Irishmen, who took his life and made me think about this all over again,” he told an event organized by Irish America magazine in the New York Yacht Club.

The remarks by the former president, whose involvement in Ireland dates back to the Northern Ireland peace process in the 1990s, have resonated in a country where the extent of the problem is now a matter of national concern.

The stark statistics “only go some way towards conveying the devastation caused by suicide in communities the length and breadth of Ireland,” according to Angela Kerins, chief executive of RehabCare, a non-governmental organization dedicated to helping people achieve their potential.

“More people are dying each year by suicide than on our roads and suicide is now the biggest cause of death among young men in the 15-24 age group."

Youth suicide in Ireland is the fifth highest in Europe, after Estonia, Latvia, Lithuania and Finland, according to the most recent study of the phenomenon, carried out by a joint committee of the Irish parliament in 2004.

The incidence of self-harm is highest in rural Ireland, with counties like Offaly recording twice the number of suicides as Dublin. The collapse of the construction industry has hit such counties hard, leaving developments of half-finished houses, empty retail parks and long lines at unemployment offices.

After examining at a Jan. 20 hearing five cases of suicide of young and middle-aged men, the County Offaly coroner, Brian Mahon said, “This is just an example of the rampant and really serious situation in Ireland, and particularly in rural areas.” The five cases included a 32-year-old carpenter and father of one facing repossession of his house and a 35-year-old single man with a drug problem.

With abuse of alcohol cited as a factor in four out of 10 suicides, a National Task Force on Suicide recommended in 1998 that drink should be made less available and more expensive; since then beers and spirits have become cheaper and more accessible. The official figures for suicide could be underestimated, this study concluded, as one in 10 road fatalities involving single occupant vehicles is believed to be a deliberate act of self-destruction.

The growing awareness of the problem of suicide in a country where it was once a taboo subject has meant that jocular or sarcastic references to suicide are no longer acceptable.

Ireland’s new prime minister, Enda Kenny, was so moved by the distress of a family he visited after a suicide that he has refused to appear on a popular television current affairs program since October when the host, Vincent Browne, said Kenny should take a bottle of whiskey and a gun and go into a dark room. Browne has since apologized.

A former prime minister, Bertie Ahern, was widely criticized for insensitivity when during the height of the boom in 2007 he said he wondered why those “cribbing and moaning” about a coming downturn did not commit suicide. He too has since regretted his remark.

Suicide rates in Northern Ireland have also risen sharply, especially among young people. Belfast was shocked at the end of January when an 11-year-old girl and a 13-year-old boy took their lives in unrelated circumstances within a 24-hour period.

Editor's note: This story was corrected to remove a reference to a future visit by Clinton to Ireland on behalf of RehabCare, which happened in the past.