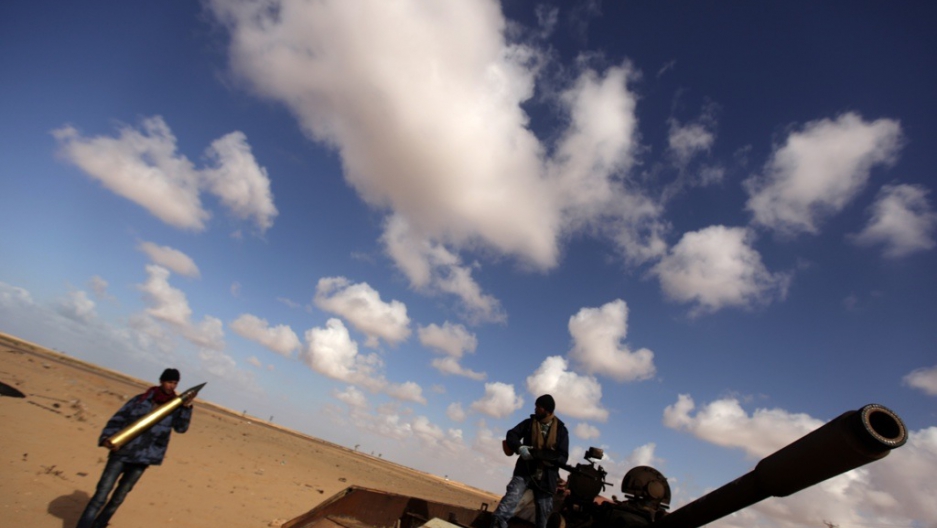 A Libyan rebel carries a tank shell past a comrade standing on a wrecked tank belonging to the forces of Libyan leader Muamma Gaddafi, which were targeted a day earlier by a French air strike, on March 21, 2011.
Credit: Patrick Baz
Share

BENGHAZI, Libya — Forces loyal to Libyan leader Muammar Gaddafi on Monday continued to attack parts of Benghazi, the last-remaining rebel stronghold, despite allied bombardments that appear to have crippled the leader’s ability to execute air strikes. Rebel leaders also reported that Gaddafi continued to hold on to the strategic oil town of Ajdabiya.

Meanwhile, U.S. president Barack Obama has stressed Gaddafi must step down or be forced from power, as allied warplanes continue to pound the Libyan leader's forces.

Obama's "policy" announcement came after the top U.S. commander, Adm. Mike Mullen, insisted on Sunday that the removal of the Libyan leader was not the goal of the current allied military operation.

Obama said that as part of the international coalition now enforcing a no-fly zone in Libya, he had "authorized the United States military to work with our international partners to fulfill that mandate," According to the Australian Broadcasting Commission.

"Now, I also have stated that it is U.S. policy that Gaddafi needs to go," he added, speaking in Santiago, Chile.

Obama said the U.S. expected to transfer the lead military role in the Libya operation to other allies in a matter of days.

On Sunday night, fighting broke out in at least three areas of Benghazi. Snipers fired down on the block of hotels where most foreign journalists are staying, an apparent attempt to scare the reporters off and prevent coverage of the ongoing conflict.

Rebel militias responded to the sniper fire and began to amass for a counter-attack several blocks from the hotels. Several freelance photographers were temporarily pinned down by sniper fire on their way home, but none were injured. Anti-aircraft guns mounted on pickups screeched into place and began firing toward Gaddafi’s forces.

Despite the ongoing clashes throughout the city, rebel leaders said that the recent bombardments by foreign forces, which were approved by the UN Security Council last week, had, at the very least, prevented a massacre.

“In my opinion, without the assistance of the French, Benghazi would have been a big massacre,” said Abdul Karim Bazama, the current secretary to the Revolutionary Council, which is based in Benghazi. Bazama spent eight years in a Libyan prison before being released last year.

He sat alongside Ahmed Al Sabur Al Sanusi, another member of the 31-person council, who served 31 years in one of Tripoli’s most-notorious prisons.

“I believe that at least until now we tried to save as many lives as we can,” Bazama said. “Of course nobody knows the exact figures of civilians killed.”

He said there had been heavy casualties in the embattled towns of Ajdabiya, Misurata and Zawiya. Rebel forces are now trying to clear Ajdabiya, he said.

On the streets and cafes of Benghazi, where residents stand around television sets, watching the fighting in surrounding towns being broadcast on Al Jazeera, many are continue to wonder if the United Nations decision to allow for foreign intervention came soon enough.

Bazama said most of the council had left Benghazi to escape Gaddafi’s advances. Many, he said, are in Baida, holed up in the green mountains outside the city.

Prominent revolutionary committee members, including its leader, Abdul Jalil, are meeting with the U.N. envoy to Libya in the eastern city of Tobruk today.

Coordination of the international air support is being headed by Abdul Fatah Younis, the committee’s chief of staff. Another revolutionary general, Khalifa Kifter, is in charge of troops at the front lines, Bazama said.

But despite the international presence in the sky, the city is far from secure, and there’s a fear that Gaddafi loyalists will attempt to assassinate key leaders of the revolution.

Yesterday, a council meeting was canceled. Today, sporadic blasts are heard throughout Benghazi. The city police have yet to join the revolution officially.

“Police are interested in coming back to work,” Bazama said, but “they need security guarantees,” implying that the rebels won’t target them for reprisals.

While youth volunteers and soldiers control traffic, no official police or legal system seems to control the process of apprehending former Gaddafi fighters who are still battling the revolutionaries.

Reports of executions of Gaddafi loyalists continue. There have also been reports of young revolutionaries heading to homes of known loyalists and shooting it out when they refuse to surrender.

“This is the same old Gaddafi regime,” Bazama said. “They refuse to be arrested, so there are conflicts. We try to send them to a court first, for investigation. There’s safe places for prisoners now.”

But with no functioning legal system, it is unlikely any suspected loyalists are receiving a fair trials and as one Libyan economics student said, when it comes to revenge, “Libyan’s don’t know how to control themselves. Before it was with knives, now it’s with guns.”

Revolutionaries on the street have posted “kill lists,” that number in the thousands.

“There’s many lists,” Bazama said. “Some are put out by the young people, which the council has tried to control. The judges have tried to coordinate, so there are no arrests without legal procedures.”

But it has proven difficult to control the thousands of rebels who are now marching through neighborhoods throughout Benghazi. Basically every young fighting-age male in this city has taken up a gun, or a knife and Molotov cocktail.

“[The rebels] are all fighting with one hand now, but these are men who are 30 years old and not married,” Adil, an economics student said, inferring that he was not concerned about his own safety.