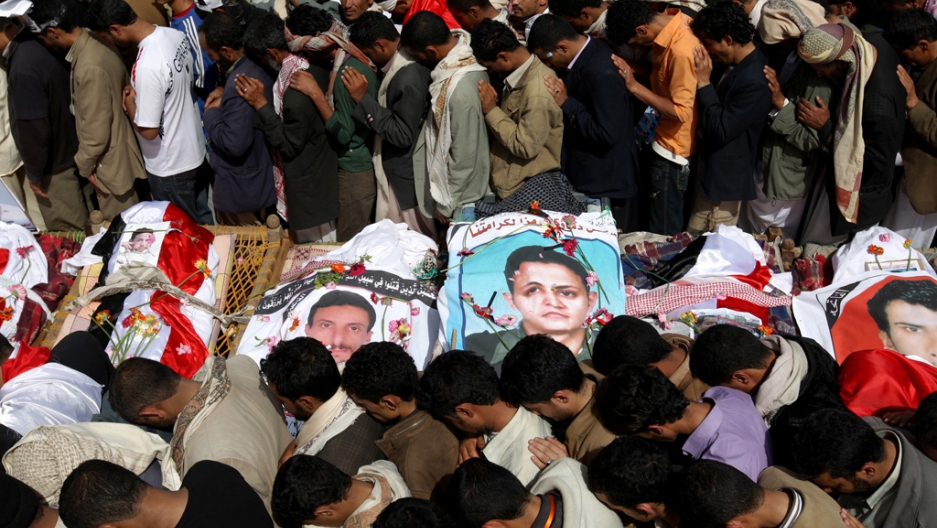 Anti-government Yemeni mourners pray over the bodies of activists who were among more than 50 protesters gunned down two days ago by snipers in Sanaa on March 20, 2011 during a mass funeral procession in the capital.
Credit: Ahmad Gharabli
Share
.incontent{display:none;}

SANAA, Yemen — Dozens of bodies wrapped in Yemeni flags were carried through the streets of Sanaa today, atop the shoulders of grieving relatives and friends.

More than 40 bodies of anti-government demonstrators, who were shot dead Friday, were taken from a hospital morgue today to Sana’a University where tens of thousands of protesters stood waiting to mourn them.

“The morgue was overflowing,” said Yasser Naji, the brother-in-law of Arafat Muhammad al-Hamza, who was killed Friday while demanding the ouster of President Ali Abdullah Saleh.

One of two female ministers in the government of Yemen, Minister of Human Rights Huda al-Ban, has resigned. Her deputy, Ali Saleh Taisir, also resigned in reaction to what they termed as an “excessive” use of violence again peaceful demonstrators.

During today's funeral procession, thousands marched through the streets hoisting placards with photos of the “martyrs of the revolution,” chanting: “The martyrs are the beloved of God.”

“This is the systematic murder of political dissidents,” said one flustered demonstrator. “They are coming for us,” he added.

The bodies were released from the morgue to their families who were waiting to march their loved ones to their graves. The funeral marched stretch for almost half a mile, with portraits of the dead posted along the roads leading away from the hospital.

“Ali Saleh [the president], the tyrant, is the enemy of God,” chanted thousands of mourners. More than 75,000 people gathered at Sana’a University to grieve for the dead.

Mu’ada al-Yusifi said that his cousin Hamid Sha’if from Taiz had been shot in the eye and the back of the head during last Friday’s slaughter. “He was an engineer and graduated from university two years ago. He could never find a job in spite of how skilled he was,” Yusifi said.

Watch footage from the funeral procession:

After prayers were held for the dead in front of Sana’a University, bodies were buried in a nearby cemetery or taken by their families. Many of those killed were tribesman from villages in Arhab and Amran, two very powerful tribes in northern Yemen. The men killed from those tribes will be taken back to the countryside and buried in their villages.

Sadeq al-Ahmar, one of Yemen’s most powerful tribal Sheikhs, joined protesters in the streets of Sanaa today, demanding that Saleh relinquish power. The Al Ahmar family is made up of nine brothers, all of whom have considerable power and influence in Yemen’s enormous Hashid tribal confederation. Sadeq is the oldest and most influential of these nine brothers.

See GlobalPost's complete coverage of protests in the Middle East and North Africa.