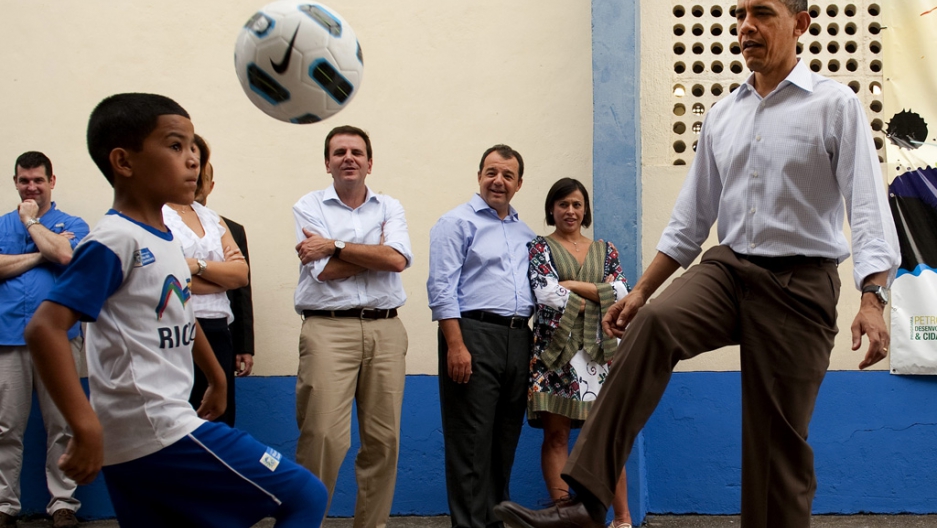 The president’s second day in Rio de Janeiro has been billed as a bid to open economic doors and connect on personal level with the Brazilian people.

But the visit ended up being overshadowed by military action in Libya, and limited by heightened security. Obama began his day in the City of God, a once-violent slum now controlled by police, where he saw a dance performance and kicked a soccer ball around with a few school kids before heading downtown for a speech:

Yet as Obama prepared to deliver remarks praising Brazil and highlighting the country’s similarity to the U.S., the eyes of the White House press corps remained fixed on recent events in Libya.

“Just one mention of Libya in the speech,” one White House correspondent told another after scanning an advance draft moments before the speech was set to begin in a packed theater downtown.

The specific mention came in the homestretch of remarks seemingly peppered with suggestions Brazil should have backed America’s support of Libya’s anti-Gaddafi rebels. (Brazil abstained from the UN security council vote authorizing the use of force in Libya).

“We’ve seen the people of Libya take a courageous stand against a regime determined to brutalize its own citizens,” Obama said. “For our two nations, for the United States and Brazil, two nations who have struggled over many generations to perfect our own democracies, the United States and Brazil know that the future of the Arab world will be determined by its people."

Brazil’s democracy, the president said, stood as an example to the conflicted regimes in Middle East. “Those who argue that democracy stands in the way of economic progress, they must contend with the example of Brazil,” Obama said.

The president opened and closed the speech to standing ovations, greeting and thanking the crowd in Portuguese. As for connecting with regular Brazilian folks, however, the speech’s staging and venue fell somewhat short.

Obama spoke Sunday afternoon to about 2,000 well-dressed, well-connected Brazilians who’d packed themselves into Rio’s baroque Theatro Municipal, a velvet-curtained, carved-marble opera house in the heart of the city’s downtown.

The original plan called for the speech to take place in the plaza outside, before an audience of more than 10,000. The Secret Service—and not the president—nixed the plan citing security concerns. That didn’t stop hundreds of people from gathering outside the theater hoping for glimpse of the president. When it didn’t happen, more than a few said they felt personally let down.

Perhaps no one more so than a middle-aged black teacher who told Solana she’d flown 700 miles and slept in the airport in hope of telling her grandkids she’d met, or at least seen, America’s first black president. Solana interviewed her on camera and, even though I’ve seen the video several times now, her story still kind of breaks my heart.