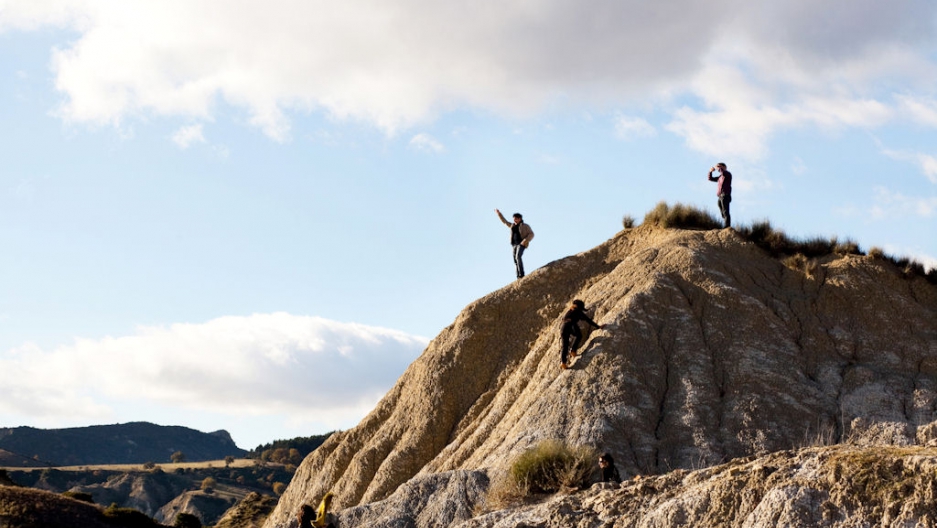 Tourists hike in the calanchi district near the town of Aliano. Locals worry that oil exploration and a proposed biomass site pose health risks and endanger the fragile environment.
Credit: Jodi Hilton
Share

ALIANO, Italy ― On a brisk, sunny winter afternoon, Fillipo Colaiacovo watches his sheep return to their corral on his small farm. Surrounded by calanchi, clay hills eroded by wind and rain and then hardened by the sun, Colaiacovo admits his passion for this harsh environment: “I am very fond of these hills.”

This unusual terrain, Italy’s badlands, extends like a rough sea for 40 square miles across central Basilicata, a small and isolated region located in the instep of Italy's boot.

Less than a century ago, Basilicata was a remote and poverty-stricken corner of Italy. That’s why a young political agitator named Carlo Levi was exiled there for his outspoken opposition to fascism. Levi became famous for his writings and artwork. His memoir, “Christ Stopped at Eboli,” chronicles his year (1935-1936) spent in Basilicata. In describing the calanchi he wrote: "At every turn there were steep slopes of white clay … and all around there was still more white clay, with neither trees nor grass growing upon it, eroded into a pattern of holes and hillocks like a landscape on the moon."

As a child growing up in Aliano, Pasquale Fanelli played among the calanchi while his father and grandfather worked the fields. He remembers running and leaping from the top of one cone to the next, avoiding puddles that sometimes formed in the valleys between. For several years he lived away from the village, but always came back to visit, eventually returning to raise his family nearby.

“Among the calanchi," said Fanelli, "one can walk and have time to reflect. There is this wind, always this breeze, so that if one wants to meditate, to be by oneself, one can think.”

Now this unique landscape is in jeopardy. Environmentalists worry that oil companies, which already have research permits in the area and are drilling nearby, may damage the fragile environment. Simultaneously, a proposed biomass center and mining projects have locals worried about the damage to air and water quality.

Though many travelers bypass the region, it has a rich history, beginning with the ancient Greeks, whose artifacts ― jewelry, pottery and coins ― have been transferred to the Archeological Museum in the nearby city of Policoro. This year, medieval tombs were discovered when a piazza was being repaved in Aliano. A few miles from the ruins of a 2,300-year-old Roman outpost lies the sprawling Viggiano oil refinery.

Revenues from the extraction of oil have brought benefits to local communities. The town of Sant’Archangelo boasts a newly renovated city hall. In Viggiano, a new playground is being constructed, roads are being repaved, and streets illuminated. Aliano has been restoring the historic center, which was rendered uninhabitable during a 1980 earthquake. “We have received 2 million euros since 1995, when the extraction began,” said said Aliano’s mayor, also named Antonio Colaiacovo.

Despite all the civic projects underway, Basilicata remains one of the poorest parts of Italy and suffers from widespread unemployment (more than 11 percent compared to 8 percent in Italy overall). The region loses 3,000 people a year, as people seek opportunities in other parts of Italy. “All this activity creates work, but not the kind of work we need,” explained Fanelli. “Young people don’t want to be bricklayers.”

Activists have been organizing protests and lobbying to stop drilling, mining and dumping in Basilicata. Maria-Rita D'Orsogna, an environmental expert and mathematics professor at California State University Northridge, has been traveling from one village to the next, talking to locals about the dangers posed by the oil extraction. She explains that oil was discovered in Italy in the early 20th century, but “it was never really exploited because most of the oil we have in Italy is of bad quality. The best oil you can find in the ground is called light sweet crude,” D’Orsogna said, “but in Italy, we have exactly the opposite. We have heavy sour crude. That means the oil has a lot of impurities.”

Those impurities take a lot of effort to extract, and the resulting waste poses serious environmental risks to air, water and land, D’Orsogna said.

Since 2004, a coalition of environmentalist organizations, including World Wildlife Fund Basilicata and Organizzazione Lucana Ambientalista, has been lobbying for a Calanchi Regional Park specifically to prevent oil and mining activities in the calanchi and to keep out toxic and radioactive waste. Since then, the region’s economic situation has deteriorated, and the chances of a park being established appear slim.

Colaiacovo says locals can’t wait for the region to act. He explained, “We want to create a municipal reserve specifically to deter manmade disturbances ― as it stands right now, anyone can do anything they want.” The town has the authority to create a Calanchi Reserve, he said, and believes it would attract tourism, adding value to the landscape. Trails will be cut for recreational use: hiking, biking and horseback riding. Companies would be prevented from mining, drilling or dumping in the calanchi.

DʼOrsogna isn’t convinced that merely establishing a park could save the calanchi. “The best indicator of the future is the past,” she said, citing a nearby park as an example. In “Val DʼAgri National Park, established in 1998, there’s oil drilling inside the park and pipelines crossing through it. There’s even illegal dumping going on there.” The establishment of a park is not enough to rescue an endangered environment. “There has to be the political will” to preserve the land, she said. “It’s very easy for politicians to cave into the pressures that come from these big oil companies.”

"Already, there's a lot of misery here, there are no jobs and now, they want to pollute our air," said Pina Berardi, a mother of three who has spent most of her life in Aliano. “We don’t want to become a garbage dump.”

Editor's note: This story was updated to correct a spelling error, a name and an attribution.