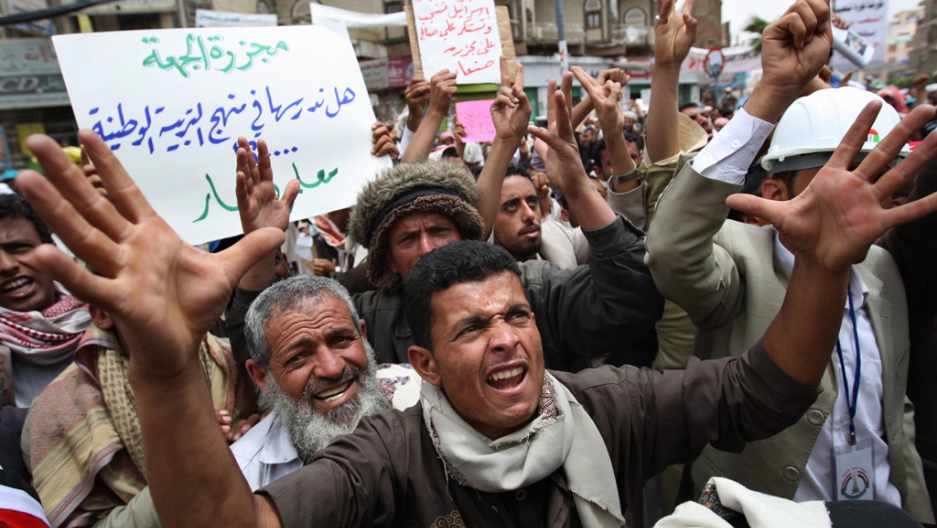 Yemeni anti-government protesters chant slogans against President Ali Abdullah Saleh during a demonstration in Sanaa on March 19, 2011 as thousands rallied despite a state of emergency imposed by the autocratic regime.
Credit: Ahmad Gharabli
Share
.incontent{display:none;}

SANAA, Yemen — Tanks rolled into the Yemeni capital of Sanaa this morning in a stunning show of force by President Ali Abdullah Saleh after he declared a state of emergency following Friday's "massacre."

On Friday, more than 40 protesters were killed — a number that is expected to increase as many succumb to their wounds — and today, two prominent ruling party members including the head of Yemen’s state-run Saba News agency, Nasser Taha Mustafa, resigned in protest of what he called a "heinous massacre" on his Facebook page.

Military presence throughout the city has increased as more armored vehicles have been deployed to strategic locations and intersections. Military checkpoints inside the city have also increased.

Protesters in Yemen’s “Change Square” remain undaunted by the president’s show of force as they grieve for friends and loved ones that were killed on Friday.

“To think yesterday’s violence will force us out is ridiculous,” said Adel al-Sarabi, adding that in spite of Friday's slaughter, more people are continuing to join the call for the ouster of Saleh. “Just today, a group of teachers have joined us,” he said.

Al Sarabi, one of the seminal student organizers of the Sanaa University sit-in also commented on the newfound military presence around the protest camp. “The military is surrounding us on all sides now, pledging to protect us from thugs. They are letting us pass through military security lines freely.”

“It is quite possible that Ali Muhsin, Yemen’s most powerful military commander, is trying to garner popularity with protesters in a plan to make a bid for power following the president’s ouster,” he said.

Yemen’s ambiguous state of emergency law dictates that all citizens are barred from carrying weapons. Such a provision will be incredibly difficult to enforce, considering that Yemen is the second most heavily armed nation in the world, following the United States.

Government influence in Yemen’s tribal areas is miniscule and enforcing such a condition would be incredibly difficult. The government has expressed concern that tribesmen may return from their villages into the city with arms. An arms blockade around Sanaa has been imposed to prevent such actions.

Article 113 of the constitution also states that during a state of war, the president may extend his term indefinitely.

Yemen expert and writer for the blog Waq al-Waq Gregory Johnsen says that even prominent government officials aren't quite sure what this state of emergency entails.

"Basically it suspends all law and allows President Salih to do whatever he wants. In a very real sense it makes him an absolute ruler answerable to no one. Additionally, I think establishing emergency law is unconstitutional," he said.