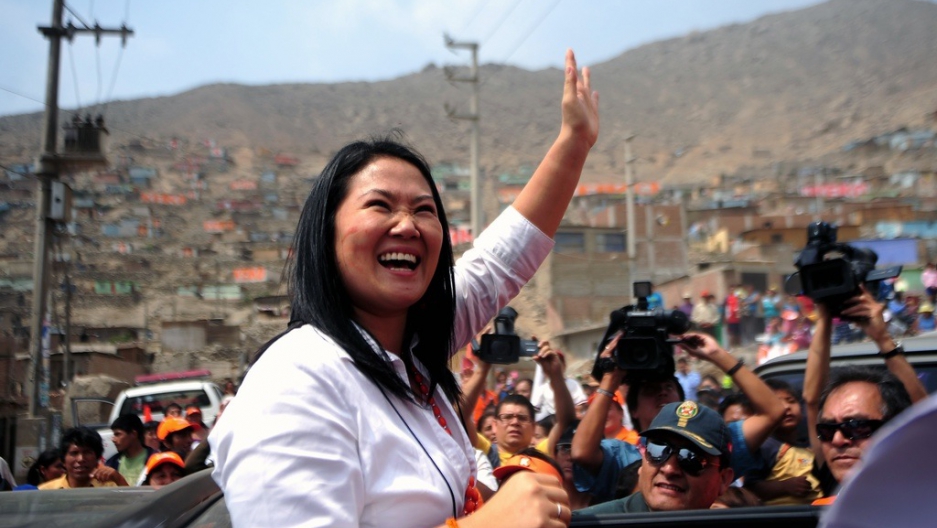 Keiko Fujimori waves to the crowd after a conference to announce her candidacy for Peru's presidential elections in a Lima shantytown, Dec. 7, 2010.
Credit: Ernesto Benavides
Share

LIMA, Peru — Although former Peruvian President Alberto Fujimori sits in prison for human rights abuses, he has become a central figure in the country’s presidential election. The reason? His daughter is one of the main contenders.

On the campaign trail, the legacy of the elder Fujimori looms large. In every campaign speech, Keiko Fujimori, 35, refers to her father, who won over many poor Peruvians by bringing roads, schools and hospitals to some of the most remote corners of the nation.

“We too will build schools, just like Alberto Fujimori who built 3,100 schools nationwide,” Keiko Fujimori recently told an audience of about 500 people gathered in a dusty vacant lot in a Lima shantytown.

Dressed in jeans and an orange campaign T-shirt, Keiko Fujimori appeared comfortable on stage, perhaps because she is accustomed to the political spotlight. In 1994 when she was just 19, her parents divorced and her father appointed Keiko as Peru's first lady.

Over the next six years, Keiko had a front-row seat as her father seized near dictatorial powers, spied on the opposition, harassed the media and tried to engineer an unconstitutional third term. In 2009, Alberto Fujimori was convicted by a Peruvian court of ordering a military death squad to carry out two massacres. He was sentenced to 25 years in prison.

Yet Keiko Fujimori is betting that Peruvians remember the good things about her father's government. During his 1990-2000 presidency, Fujimori tamed hyperinflation and dismantled the powerful Shining Path guerrilla group — achievements that laid the foundation for Peru's current economic boom.

“My father, indeed, he creates passion,” Keiko Fujimori told GlobalPost following a campaign speech. “You either love or hate him. But in my country the majority of the people consider him as the best president that we had in the history of Peru.”

Sharing this view is Veronica Valdivia. She was uprooted from her home in the 1980s by the Shining Path and now lives in a Lima slum. She’s so thankful that Alberto Fujimori crushed the rebels that she plans to vote for his daughter.

“Keiko has learned a lot from her father,” Valdivia said. “But she won’t repeat the bad things her father did because she is a young woman with fresh ideas.”

In mounting her own political career, Keiko Fujimori paints her father as a savior while blaming the corruption, dirty tricks and human rights abuses that marked her father’s government on Vladimiro Montesinos, Alberto Fujimori’s infamous spy chief who is also in prison.

The strategy appears to be working.

In 2006, Keiko Fujimori — who studied at Columbia and Boston University and is married to a U.S. citizen — was elected to the Peruvian congress with more votes than any other legislative candidate. And there appears to be another politician in the family. Keiko’s younger brother, Kenji Fujimori, is running for congress this year.

But the possibility of a Keiko victory alarms many Peruvians who claim Alberto Fujimori nearly destroyed Peru's democracy. A number of Alberto Fujimori's questionable cronies are part of Keiko’s entourage. And if elected, Keiko Fujimori has pledged to grant her 73-year-old father, who was recently hospitalized for tongue cancer, a presidential pardon.

“If the daughter of the dictator — who has been jailed for being a criminal and a thief — has the potential to become president of Peru, I will try to stop this by any legal means necessary,” said novelist and Nobel laureate Mario Vargas Llosa, who lost to Alberto Fujimori in the 1990 election.

Speaking at a news conference, Vargas Llosa added: “I think this would be a true catastrophe for the country.”

“The only thing Keiko has going for her is the Fujimori name,” Novoa said. “As a congresswoman, she didn’t do anything and was often absent. Her only objective is to pardon her father. Everything else is secondary.”

If Keiko moves into the national palace, it would symbolize an extraordinary rehabilitation of the Fujimori name. Yet Peru is a land of political second chances. Lima analyst Jose Luis Sardon points out that the country lacks strong political parties. Instead of ideology, most parties rely on a strong, charismatic figure to drum up votes.

Consider outgoing President Alan Garcia. A master orator, he was first elected president in the late-1980s when he was in his 30s. Although his socialist policies ran Peru’s economy into the ground, Garcia was re-elected in 2006 as a pro-business conservative.

Then there’s Keiko Fujimori’s main rival in this year’s election, Alejandro Toledo, who was one of the main opposition leaders during her father’s government.

Toledo was elected president in 2001. But personal scandals and dismal approval ratings nearly forced him to resign. Now, Toledo has recast himself as tested elder statesman and he has emerged as the frontrunner, according to opinion polls.

If no one wins a majority in the April 10 first-round election, the top two vote-getters will meet in a June run-off. If the current poll numbers hold, that would mean a head-to-head contest between Toledo and Keiko Fujimori.