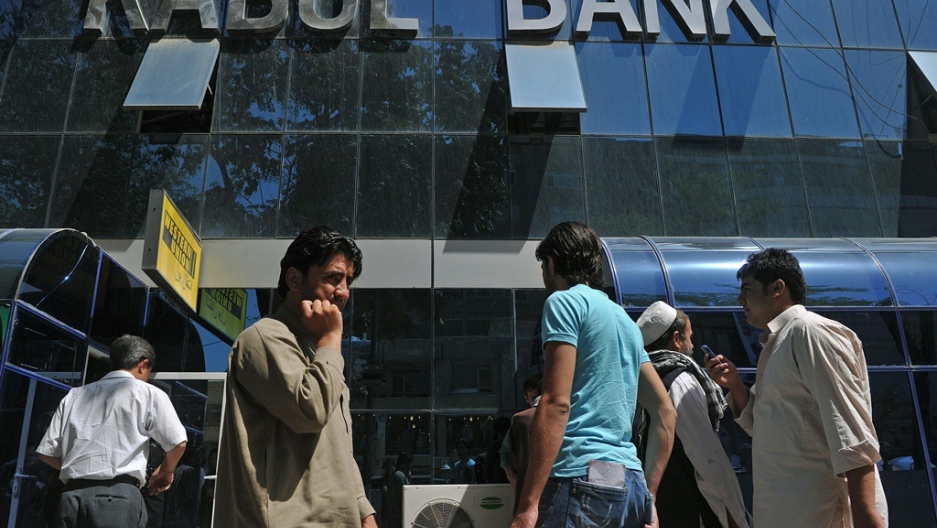 Afghan pedestrians walk past the main branch of The Kabul Bank in Kabul on Sept. 4, 2010.
Credit: Massoud Hossaini
Share

Never face off against a world-class poker player unless you are prepared to call his bluff.

That should be one of the main lessons international investors take away from Kabul Bank, which is rapidly transforming itself from a major financial scandal into an Afghan-style morality play.

Kabul Bank got caught with multiple and very well connected hands in the till; instead of asking for mercy, the shareholders sought to shift responsibility to their international advisors.

The consulting firm Deloitte is likely to end up as the villain. According to Kabul Bank and the U.S. Agency for International Development (USAID), it failed to provide the proper technical assistance to alert the bank’s shareholders that rash loans, outright fraud and illegal money transfers were bound to get them into hot water one day.

Price Waterhouse Coopers also comes in for a minor bad-guy role; it was the accounting firm that was unable to spot Kabul Bank’s fraud in its annual audit.

Instead of calling Kabul Bank’s bluff, Deloitte officials are keeping mum. The company issued one mild statement saying that Deloitte had acted appropriately in the matter.

USAID is more than happy to avoid a confrontation with the Kabul government by taking out its ire on the international firms in question, and have cancelled Deloitte’s multi-million dollar contract.

USAID officials were shocked — shocked! — to find out that fraud was going on at Kabul Bank. Apparently they had not heeded the numerous media reports of shady dealings at the financial outfit published well before Kabul Bank’s meltdown last September.

In addition, they must not have been privy to the cables sent out even earlier by the U.S. Embassy in Kabul, and made public by the always-annoying WikiLeaks. The cables, some from as early as 2009, indicate that most of the worst abuses at the bank were no surprise to the diplomats.

The poker player in question, Sherkhan Farnoud, emerges all but unscathed from the mess, although he did step down last fall. He was the bank’s chairman and the man with the idea behind the venture. He waited several years for the Central Bank to approve his request to start Kabul Bank, which he only wanted to do in the interest of helping his homeland, according to an interview he gave to a UAE newspaper in 2002.

It did not seem to bother anyone at the Central Bank that Farnoud already operated a large money-transfer outfit of dubious legality in Dubai, or that 10 of his employees had once been arrested for dubious banking practices in Russia years ago.

“Business in Afghanistan revolves around trust,” one of his business partners told The Washington Post in early 2010. Indeed.

For those who have been blissfully unaware of the complexities of Kabul Bank’s fortunes, the facts of the case are fairly simple. The shareholders of Kabul Bank traded on their high-connections to play fast and loose with a poorly regulated financial system.

They granted themselves unsecured loans, made reckless investments, and lived in high style on Dubai’s Palm Jumeirah, a luxury resort on a man-made island that is just as artificial as, well, Kabul Bank’s quarterly earnings statements.

Farnood, who really is a world-ranked poker player, chose his partners widely – the brothers of the president and vice president, and a man quite close to President Hamid Karzai politically.

Khalil Ferozi, the bank’s CEO, was financial advisor to Karzai’s presidential campaign in 2009, and the bank reportedly contributed quite generously to the president’s re-election bid, which was ultimately successful.

This might explain the extraordinary latitude the bank was given, and why, even after the scandal broke, Karzai and the Central Bank chairman Abdul Qadeer Fitrat, insisted that Kabul Bank was on solid financial footing.

The IMF has called for Kabul Bank to be placed in receivership, and wants a thorough investigation into the financial practices that brought it to this pass. If warranted, the perpetrators of the scandal should be prosecuted, said IMF officials after a fact-finding mission to Kabul in February.

IMF has failed to certify Afghanistan as a worthy recipient of international assistance. Without the IMF imprimatur, many donors will be reluctant to commit funding. More than $1 billion in potential programs are on hold while the situation plays itself out.

In the meantime, plans are proceeding apace to transfer full control over security to Afghan security forces; the Afghan government also wants more assistance money to be funneled directly through its own systems, bypassing international implementers.

Karzai has recently called for the dissolution of the Provincial Reconstruction Teams (PRTs), which, he insists, form a parallel structure that impedes the development of local government. They also, not inconsequentially, direct a large amount of funding to local projects, bypassing government coffers.

Transition to “full Afghan sovereignty” should be completed by 2014, at which time most of the foreign troops, the bulk of international implementing organizations, and the small army of hangers-on should be well on their way home.

But if the example of Kabul Bank has any deeper lessons for the Afghan government, it is that it is always handy to keep an international advisor or two around to soak up the blame if things should go wrong.