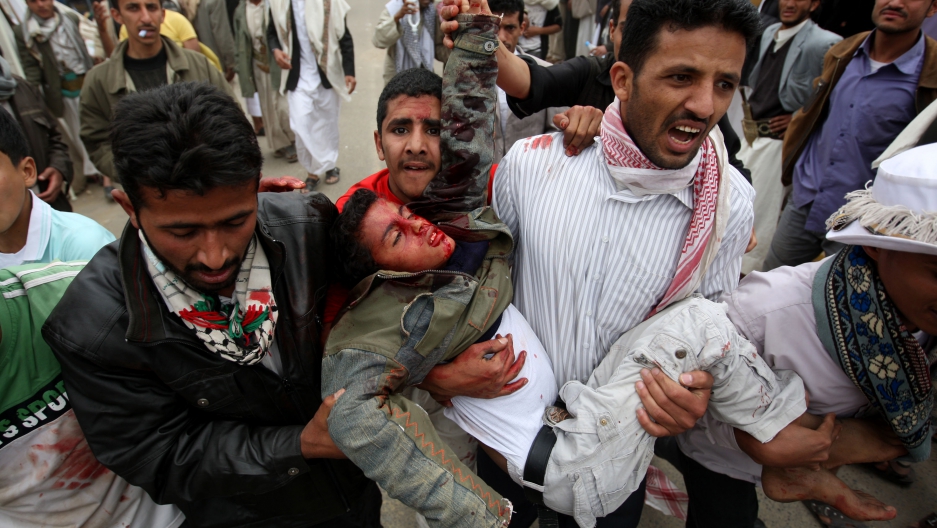 Yemeni anti-government protesters carry away a wounded demonstrator in Sanaa March 18, 2011 as more than 30 anti-regime protesters were shot dead and over 100 wounded, medics and witnesses said.
Credit: Ahmad Gharabli
Share

SANAA, Yemen — Yemeni security forces opened fire in a crowd of tens of thousands of anti-government protesters Friday outside Sanaa University in the capital, killing scores and wounding many more.

Doctors at the main hospital said that at least 50 had been killed and more than 100 injured during the attack.

Xinhua reported that children were among the casualties. "The child was hit by a bullet in his head," an eyewitness named Twific al-Yaziday told Xinhua, adding that there were more than 20 others were wounded in heads and necks.

Shooters in plain clothes fired down on the demonstration from rooftops and windows straight after the protesters rose from their noon prayers. The crowd had reportedly stretched for a mile from Sanaa University.

There have been daily anti-government demonstrations in Sanaa and other cities around the country since Egyptian President Hosni Mubarak's ouster on Feb. 11. President Ali Abdullah Saleh has said he will step down when his term ends in 2013 but has vowed to defend his government "with every drop of blood."

Until this week, 29 people had been reported killed in the unrest, according to international human rights groups. Most attacks on protesters had been by plainclothes police, although last week military personnel opened fire to disperse a group of demonstrators trying to bring additional tents into the protest area outside Sanaa University.

Tens of thousands of protesters gathered in cities across Yemen on Friday, from the southern port city of Aden to Hodeida in the west, according to the LA Times.

In Sanaa, activists reported that snipers fired on crowds, and doctors said they had been prevented from attending to the wounded. "The situation is tragic. There are dozens killed and hundreds wounded. We couldn't send relief," said Abdul-Qawi al-Shumeiri, secretary-general of the doctor's syndicate, according to the LA Times.