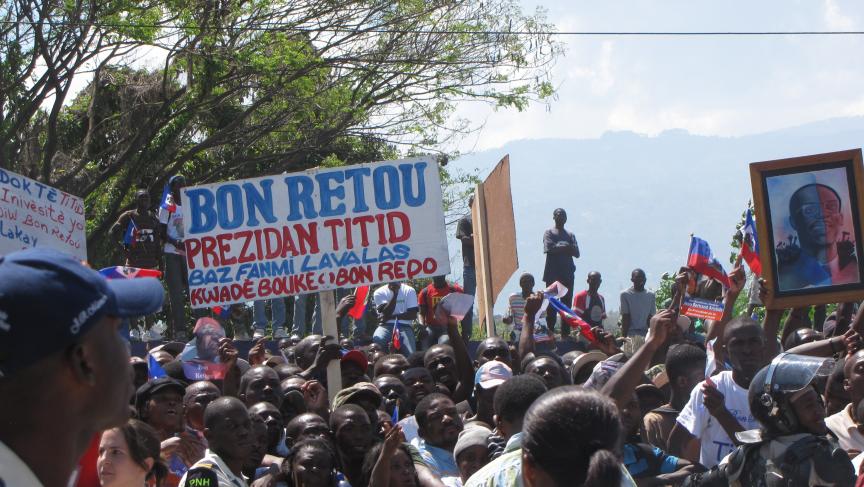 Share
By Jeb Sharp The United States was among those trying to dissuade Aristide from returning before Sunday's election. His relationship with Washington has long been fraught and complicated. Aristide rose to power in the late 1980"²s because he represented hope to millions of poor Haitians who had suffered under the Duvalier dictatorship. "He concentrated unto himself the desire for change in the country," said political scientist Robert Fatton. "And he symbolized the fight against Duvalier." Aristide was elected president in a landslide victory in 1990. But there was trouble ahead according to Fatton. "Aristide talks very bluntly about classes, about class struggle and about the fact that the country is really being run by an oligarchy," said Fatton. "And that that oligarchy really now has to surrender." Aristide proved too threatening to Haiti's most powerful. The Army overthrew him before a year was out. The CIA had ties to the coup leaders but officially, the United States denounced the move. Margaret Tutwiler was spokeswoman at the State Department at the time. "The United States strongly condemns the removal of President Aristide," said Tutwiler. "We call for the immediate restoration of Haiti's legitimate, democratically-elected government." Aristide moved to Washington to lobby for his own return. The Bush Administration and Organization of American States imposed sanctions after the coup. The next president, Bill Clinton, ramped up the pressure. In 1994, the UN Security Council endorsed the use of military force to restore Aristide to power and he went home accompanied by a US-led multinational force. James Dobbins was President Clinton's special envoy to Haiti at the time. "We flew back to Haiti together," said Dobbins. "There was a huge crowd at the airport, and an even huger crowd at the national palace. There was just an ecstatic reception." But once he'd been restored to power, Aristide's relationship with the US began to sour. "I think the Clinton Administration was very disappointed in his behavior once he was in office," said Dobbins. "And with his inability to mend relations with other elements of his society and carry through on the reform program that we thought he had committed to." Aristide's relations with his own supporters began to sour too. Some of them didn't like the economic deals he'd made with Washington. And Robert Fatton says Aristide was still focused on the movement he created, whereas others wanted to get serious about creating a political party and political institutions. "Aristide didn't like that," said Fatton. "He was all about the movement without a clear program. And that generated tensions." Aristide's term ended in 1996 but he was re-elected in 2000. This time though, there were questions about the election. And, Aristide faced fresh hostility from Washington where the Republicans were back in power. James Dobbins says the Republicans during the 1990's were much more sceptical of Aristide than Clinton and the Democrats had been. "In many ways their scepticism proved justified," said Dobbins. "He certainly had a much more confrontational relationship with the US government during his second full term of office." This time around when tensions reached a boiling point and armed rebels advanced on the capital, the international community withdrew its support. Aristide accused the United States of kidnapping him in 2004. James Dobbins says that's not quite right. "I don't think he was kidnapped. I think he was pressured to leave," said Dobbins. "We didn't threaten him. We simply told him he couldn't expect us to protect him." According to Robert Fatton, Aristide was besieged in the end—by the international community, by conservative forces inside Haiti, and even by people who had once supported him. "The tragedy of the Aristide movement is that at one point they had a historic opportunity to change the country and change it utterly but that chance ultimately wasn't seized," said Fatton. Which is why Aristide has returned to a Haiti where his vision of a more prosperous and equal society has yet to materialize.