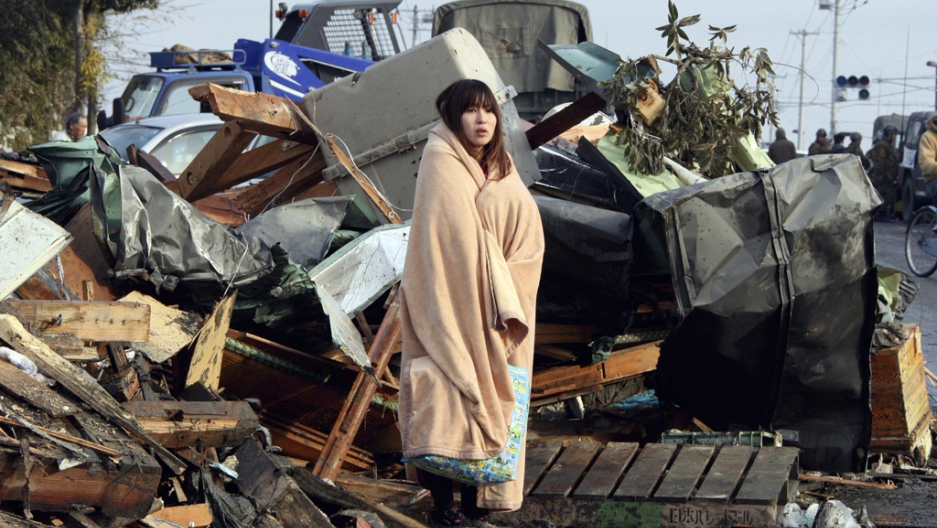 A girl, wrapped in a blanket, stands to look on tsunami damaged town at Ishinomaki city in Miyagi prefecture on March 13, 2011.
Credit: Yomiuri Shimbun
Share

OSAKA, Japan — With the hardest-hit areas of northeast Japan barely receiving supplies such as food, water and blankets, government officials have come under fire for not acting quickly enough to transport goods to towns and villages ravaged by earthquake and tsunami six days ago.

As relief teams struggle to make their way to remote disaster areas in northern Japan, they face many challenges, including freezing temperatures and snow, inaccessible roads, lack of gasoline, power outages and now dangerous levels of radiation.

Some international rescue teams have pulled out due to radiation fears, and most relief agencies are moving further from the stricken Fukushima nuclear power plant.

The death toll reached 5,300 people on Thursday, and the number is expected to climb to at least 10,000. Japanese police report more than 452,000 people were in temporary shelters.

Takashi Yamamoto, an experienced aid worker with the Tokyo-based non-profit organization Peace Boat, secured a special permit from the government Wednesday to travel by expressway to Sendai, near the earthquake’s epicenter. Very few vehicles are currently allowed on this road, making it difficult for aid workers to set up relief centers in the north.

“The government should help with transportation logistics,” Yamamoto said, as he prepared to leave Tokyo for Sendai with a truck full of supplies on Thursday morning. He and fellow relief workers plan to set up a base camp in Yamagata City, about 40 miles from Sendai.

He’s unclear on how exactly they will get enough goods to the area. “Nobody knows what’s going on,” he said. “I don’t know exactly what we can do.”

Yamamoto has worked on relief efforts after disasters in Pakistan, Indonesia, Turkey and Sri Lanka. He also helped begin the volunteer aid worker movement in Japan after the Great Hanshin Earthquake in 1995.

“I arrived in Kobe a day after that earthquake and stayed three months,” he said. After the 1995 earthquake, which killed more than 5,000 people, relief workers based themselves in Osaka, only 20 miles away from Kobe.

Unlike the Kobe tragedy where neighboring cities were still functioning, last week’s earthquake wiped out a 500-mile-long area along the northeastern coast, making it difficult to set up staging areas for relief work.

“The scale of the devastation is unprecedented,” said Meri Joyce, International Coordinator for the non-profit Peace Boat, echoing comments made on Wednesday by Japan’s Emperor Akihito in his first televised address.

“There is nothing available in affected areas,” Joyce said. She added that even non-profit groups who want to help are unsure of what’s needed.

“At this point, everything is in a shortage,” Yamamoto said. “Most people will have to stay in camps for at least two months,” he added.

The added fear of nuclear radiation has hampered efforts, especially in Fukushima, where many victims have little or no support.

“Fukushima is struggling the most in terms of access to basic needs,” Joyce said, since many aid groups have been cautious about going to that area, in light of the news of increased radiation levels.

Most of the 20 Japan-based aid groups that have dispatched teams to the regions have not been able to start relief operations, since they are still determining how and where to set up base camps.

Larger organizations such as the Japanese Red Cross have begun a massive aid effort and firefighter teams from California, Virginia and the U.K. are continuing rescue operations in the northern coastal Ofunato City.

Many said the Japanese government underplayed the radiation situation and has struggled in its communication with relief organizations. “They need to make sure accurate and timely information is presented,” Joyce said. “The sharing of information is going to be key,” she added.

Some said the Japanese government has been purposely vague to allay fear and contain panic. “They are trying to be careful,” said Sachiko Minami. “The government doesn’t want us to worry too much,” she added.

“Even now, everyone is confused and worried.”