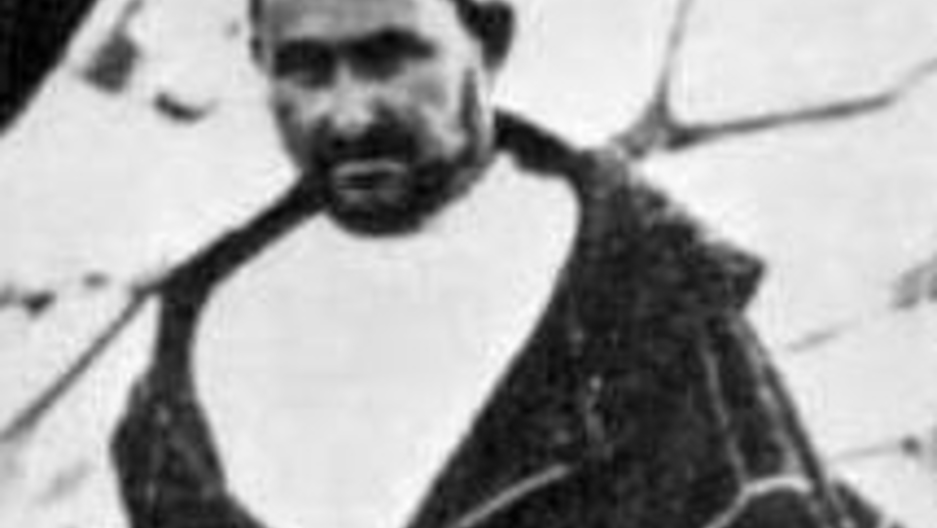 Share
By Gerry Hadden As North African and Arab citizens cast about for leaders to fill the political vacuums in their countries, a quick remembrance of one such leader from days gone by. Abd El-Krim made his name liberating northern Morocco from Spanish colonial rule, in 1921. He was a scholar, a warrior and, for a brief time, even an emir. But Abd El-Krim was also a Rif, an ethnic group within the region's larger Berber community. And that's kept him sidelined in Morocco's official history. It began with the decisive battle against the Spanish, in 1921, at Annual, in the mountainous Rif region of northern Morocco. The fight pitted Abd El-Krim and his rag-tag Rif militias against thousands of Spanish troops. One former Rif fighter, an elderly man named Chaaib Si-Mohand N'aali ,spoke of their victory in a Spanish documentary three years ago. "Abd El-krim was our leader," the old man recalled. "We surrounded the Spanish. They resisted. But they were afraid and exhausted. We wiped them out. The Rif are ethnic Berbers … the indigenous people who've lived in North Africa for more than two millennia. The story of how their leader, Abd El-Krim, liberated them from colonial exploitation has become a legend for them. Journalist Merieme Addou's grandfather fought alongside Abd El-Krim. Addou said Abd El- Krim was far outnumbered by the Spanish and knew he couldn't fight an ordinary war. "You need to have a tactic to win," she said. "The Rif is a region of mountains. As foreigners, if you come here you don't know this place. You don't know where you are. So it was kind of using this very hard, difficult land, using it as a way to defeat the Spanish; using guerilla fighting. Declaring independence After victory, Abd El-Krim established the Rif Republic, a state independent not only from Spain and Morocco's other colonizer, France, but from Morocco itself. The Republic's new emir sent letters to every European head of state to announce it. But his declaration fell on deaf ears. Five years of fighting later, the combined Spanish, French and Moroccan armies drove Abd El-Krim into exile, in Egypt. He died there in 1962 without ever setting foot back in Morocco. Not even after it gained full independence from France in 1956. The Rif rose up once more, in 1958, and were brutally put down by then King Mohammed V. The repression continued under the next king, Hassan II according to Samed Assid, a Berber activist. "Hassan II had a policy of vengeance," Assid said. "He punished the Rif. Like Ghaddafi is doing now to his own people, in Libya. Hassan massacred the Rif population. And we have never forgotten. And we have not integrated. Today we are still a separate population." As for Abd El-Krim, Assid said the Moroccan government has simply fabricated his role in history. "His story has been falsified in our schoolbooks," he said. "Open a Moroccan textbook today. It says that Abd El-Krim fought against the French and Spanish …for the Moroccan throne. The books don't mention his project to set up an independent Rif republic. That is taboo." Assid said the taboo started in 1921, the moment Abd El-Krim declared his Rif Republic. The Moroccan state, dominated by Arabs, never wanted to mention the subject again. Disappearing taboos But 90 years later, some taboos surrounding the Berber have disappeared. Assid, who is now president of the Morocco's Royal Institute of Berber — or Amazigh — Culture, demonstrated on a recent day, sitting in his office. He sang a traditional Berber poem. In his hands he held a book with the lyrics, written in the Berber alphabet. "Our current King, Mohammed VI, created this Institute," he said. The king has also allowed our language back in public schools. And he's allowed it to be written down, in its own alphabet. Before 2001 this was forbidden. If someone wrote in Berber letters on a sign or hotel awning, for example, he would be jailed." But one Berber wish remains unfulfilled; Abd El-Krim remains buried in Egypt. And there's no indication that the government will let his relatives bring his remains home. But the pressure is mounting, said journalist Merieme Addou. She said that during Morocco's largest pro-democracy march this February, some Rif carried Abd El-krim's photo, and signs asking for his repatriation. "I think there is no real reconciliation with the Rif people until his body is back and buried in his home town," she said. Moroccan Berbers are also talking about forming their own political party. If they do, and democratic elections are held, the Rif may just be able to vote their legendary hero home.