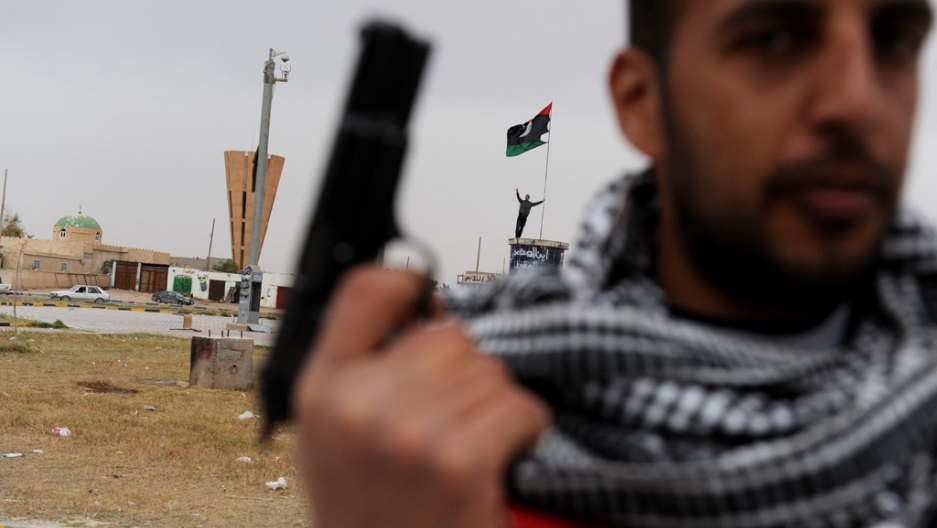 A rebel fighter stands with his handgun at a roundabout in the center of town in the eastern Libyan city of Ajdabiya on March 15, 2011.
Credit: Roberto Schmidt
Share
.incontent{display:none;}

BENGHAZI, Libya — Libyan troops loyal to Muammar Gaddafi closed in on Benghazi, the bastion of anti-government opposition, on Wednesday as the leader's son predicted it would be taken within 48 hours.

But the BBC said rebel fighters denied government claims they had been routed from Ajdabiyah, the last town protecting Benghazi from Gaddafi’s forces as they push eastwards using heavy artillery and aerial bombardment.

The latest developments come as the United Nations Security Council is due to discuss a no-fly zone over the North African country. But rebels in Benghazi fear it could be too little too late.

"What more do they need?" asked Mustafa Gheriani, a Libyan rebel who graduated from the University of Western Michigan, of the international community. "We've given everything, we've given our people. Do they want another Rwanda?"

"Our biggest fear is that if Europe and the U.S. don't move soon, we will lose the faith we now have in democracy, and our young people will be an easy target for extremists," he added.

Iman Bugaighis, a professor of orthodontics who was drafted as the unofficial spokeswoman for the rebellion, said that if the United Nations and other international groups believed in human rights, they would have acted by now.

"How long will it take for the international community to stand up for what they vlaim to believe in?" he asked. "It's hard to believe anymore that they stand for human rights, or for anything. I think it's just their investments they stand for now."

"I'm not crying out of weakness, I will stay here until the end. We will never surrender and we will win. But we will never forget who stood with us and who betrayed us," he added.

Britain and France are calling for air space over Libya to be shut down, as have the 22 members of the Arab League of nations. But a meeting of G8 ministers failed to back the action after Russia and Germany expressed misgivings.

The Libyan leader’s son, Saif al-Islam Gaddafi, has warned that any intervention agreed by the United Nations would be futile.

“Military operations are over. Within 48 hours everything will be finished. Our forces are almost in Benghazi. Whatever the decision, it will be too late,” he told Euronews.

Al Jazeera said Libya’s armed forces had issued a televised statement describing their actions as a “humanitarian operation” to save Benghazi’s citizens, pledging that rebel fighters would not face retribution.

“Advise your duped sons to hand over their weapons to the armed forces or the People's Leadership and they will be covered by an amnesty requested by the Commander [Gaddafi], which will be valid for any person who hands over his weapon to the armed forces and refrains from resistance and subversion," it said.

Meanwhile, in western Libya, government forces have launched an all-out assault on Misurata, bombarding the rebel-held town with heavy artillery and cutting off supplies and communications, Al Jazeera reported.

Reuters quoted a hospital medic saying at least five people had been killed by the shelling.