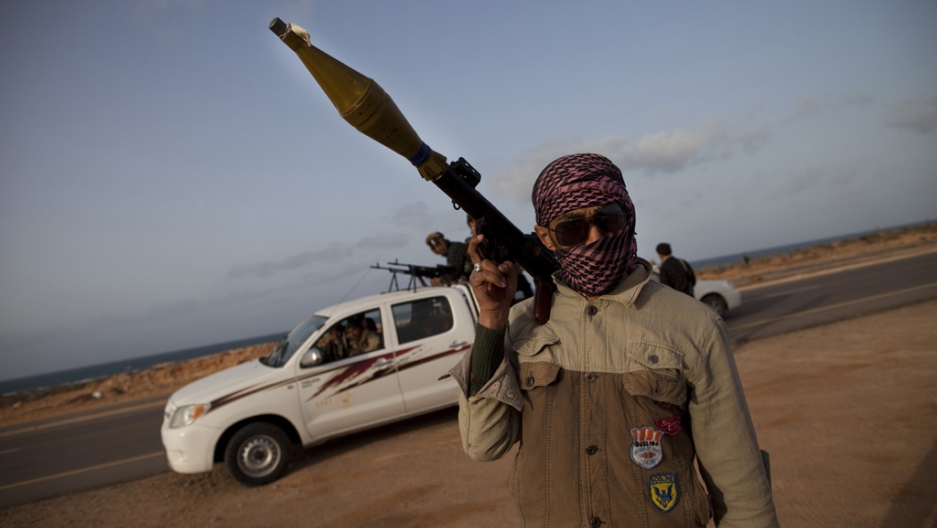 A fighter carries an RPG launcher on the road outside of Brega.
Credit: Nichole Sobecki
Share

BENGHAZI, Libya — Explosions punctured the noise of city traffic here for most of last night, but it was only fishermen. Apparently they use dynamite.

In Benghazi, at the moment, even an ordinary job appears fraught with danger.

There was an increasing volume of small arms fire overnight, but it came from celebratory AK-47 bursts. The bravado, residents here said, helps ease the uncertainty of days ahead for this city — the last remaining rebel stronghold.

News headlines have emphasized the string of rebel defeats first in Ras Lanuf, then in nearby Brega and now possibly Ajdabiya, although despite consistent shelling by forces loyal to Libyan leader Muammar Gaddafi, it remains unclear who is in control there.

Rebel spokesmen offered a tour of the Ajdabiya on Wednesday, but it was cancelled because of “aerial strikes hitting Ajdabiya as of 1:25 p.m.,” said Khalid Asaya, a civilian coordinator for military affairs in Benghazi.

Some Benghazis believe that the rebels let Gaddafi forces into Ajdabiya Tuesday night in order to ambush them. Another view is that the rebels retreated from the shelling and then later advanced back.

Who controls what ground remains difficult to determine.

In Benghazi, however, with a population of almost one million and a working infrastructure — the lights and even the internet is still on — the population remains defiant.

Many here are pinning their hopes on the idea that Gaddafi won’t be able to extend his supply lines and manpower to stage an attack on a city of this size.

“It’s a logistical nightmare for him,” said Mustafa Gaheriani, the chief media organizer for international press in Benghazi.

And so the Libyan people remain resolute, even as much of the international press has fled and pro-Gaddafi forces continue their relentless shelling of Ajdabiya.

“He can only attack Benghazi by airplane,” said Afshraf, a translator who has worked with several foreign journalists. “There are too many people in Benghazi.”

Last night there was a moment of joy among the rebels when a suspected Gaddafi spy was taken in for questioning. By all accounts this is a city far from surrendering. The flags of the deposed king still wave in “Revolutionary Square,” once the parking lot of Gaddafi’s old courthouse, which faces the sea.

The crowds begin to gather at the square every evening and, by night, it is teeming with thousands.

“We’re ready for anything,” Omar, 46, a jobless refrigeration technician from Benghazi said. “We expect to win, but we know Gaddafi is using his forces to kill off the Libyans.”

Meanwhile, rumors swirl and tensions simmer. At around 10 p.m. Tuesday night here, rumors that a Libya Air Force plane turned and crashed directly into Gaddafi’s palace sent the crowd into a riot of celebration. Anti-aircraft guns were fired out into the sea. Cars streaming through the streets honked incessantly — as if there had been a major soccer victory.

The Benghazi seaside opposite the main square has several anti-aircraft positions surrounded by sand bags.

But it feels paltry.

“I myself look every night to the horizon, we have nothing,” Omar said. “I’m holding my coffee and my cigarette. And my family is close to the beach. We have some people who use gelatine [dynamite] for fishing to get the fish. So my daughters do not sleep.”