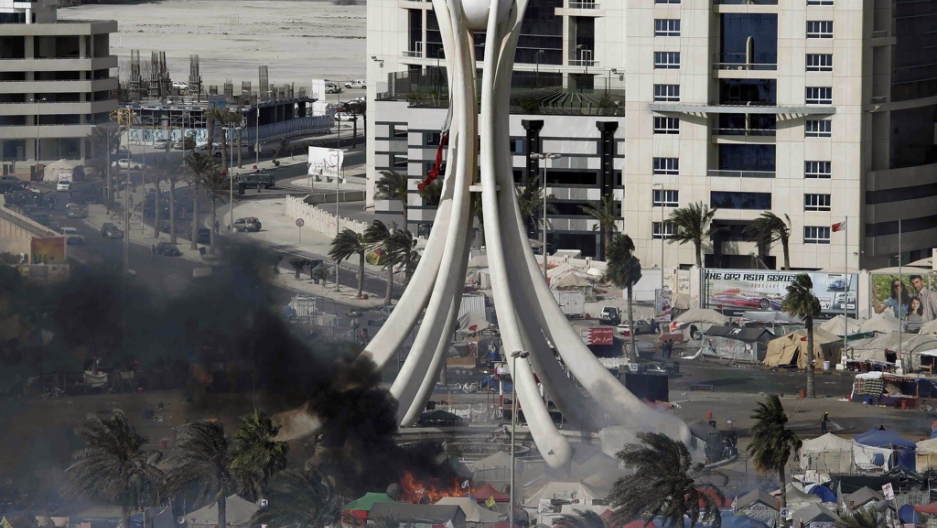 According to the Associated Press, the country's Sunni minority leadership had taken at least seven prominent opposition activists into custody in pre-dawn raids Thursday, including Hassan Mushaima and Abdul Jalil al-Sangaece — who were among 25 Shia activists previously sent to trial on charges of trying to overthrow the nation's Sunni rulers.

The case was dropped to calm tensions last month, but according to the AP the latest sweeps suggest that the authorities have abandoned efforts at dialogue and are trying to silence opposition leaders.

Moving at first light on Wednesday, Bahraini security forces used teargas and rubber bullets to evict occupants of the tented camp set up in the capital's iconic Pearl Square.

The early morning attack was just the first stage of an all-day operation during which Bahraini security police and military took control of several key points in the city, including a major hospital, and began enforcing a 4 p.m. curfew in several parts of the capital.

The security forces, which are predominantly Sunni, also moved into villages outside the capital populated mainly by Shiites. Gunfire and helicopters could be heard even after nightfall in some of these neighborhoods, according to one Bahraini reached by phone.

“What is happening to the Shia now in our country is an ethnic cleansing,” said Fareed Ramandan, 49, a novelist who is Sunni. He said that he could hear gunshots in Shiite villages near his home in Al Sahla about 4 miles from Manama.

The government, which declared a state of emergency on Tuesday, said it had moved to get rid of “outlaws” and “rioters.”

In interviews with Al Jazeera, Bahrainis at Salmaniya Hospital said that medical personnel were prevented from entering and leaving the complex, and that ambulances were stopped from picking up wounded in the city. A video clip on the same station showed white-helmeted Bahraini security forces wantonly smashing windows of parked cars with large sticks.

Schools and the stock market were closed indefinitely, and news agencies reported that several judges, the health minister, and four members of the legislative Shura Council resigned in protest at the government’s use of force.

The harsh crackdown represented a major escalation of violence in the month-long battle of wills between the government of King Hamad bin Isa al Khalifa and an unprecedented street movement of Bahraini citizens demanding political reforms.

That battle has increasingly taken on sectarian overtones because of Bahrain’s sectarian divide — about 70 percent of the country’s population is Shiite, but the ruling royal family, which controls much of the island’s property and its business, is Sunni.

Wednesday’s government clampdown followed several days of increasing tension and violent clashes between state security forces and bands of young male protesters, some of whom had set up their own traffic checkpoints.

A statement read on Bahrain Television by a Bahraini Defense Force spokesman said that “forces from the Public Security and the National Guard, with the support of the Bahrain Defense Force, launched an operation to cleanse the Gulf Cooperation Council Roundabout, the Bahrain Financial Harbor, the Salmaniya Medical Complex and the areas surrounding them.”

The aim of the operation, he said, was “to evacuate all the outlaws who had terrorized citizens and residents and harmed the national economy.”

Bahrain Television later showed the police in control of Pearl Square as a female announcer provided this commentary: “We can assure our citizens and residents that Bahrain’s security and stability is back and is in the hands of the people we have always trusted.”

In another verbal cue that the government is seeking to obliterate the protest movement, it avoided using the name Pearl Square, now widely known as a symbol of the protesters’ movement. Instead, it referred to the space cleared in the raid today as the “Gulf Cooperation Council roundabout.”

"We object to excessive force and violence against demonstrators; we raised our concerns directly today to Bahrain," it said in a message on Twitter. "We continue to believe the solution is credible political reform, not security crackdowns that threaten to exacerbate the situation."

U.S. President Barack Obama had personally called the leaders of both Bahrain and Saudi Arabia to express his concern over the violence, according to Jay Carney, the White House spokesman.

U.S. Assistant Secretary of State Jeffrey D. Feltman is in Bahrain in an effort to steer the two sides into a meaningful dialogue. A long-time U.S. ally, Bahrain hosts the headquarters of the U.S. Navy’s Fifth Fleet.

A Saudi official said that none of the 1,200 Saudi National Guard soldiers sent to Bahrain Monday participated in Wednesday’s crackdown. “They had nothing to do with anything that happened today,” he wrote in a text message. They “are in the area of royal palace protecting it and the Riffa district.”

Saudi and Bahraini officials described the dispatch of the Saudi troops and 500 policemen from the United Arab Emirates as a collective effort by the Gulf Cooperation Council to support the Bahrain government.

But it is not clear if the other three members of the council are going to follow suit.

In an interview Tuesday with Al Jazeera, Qatar’s Prime Minister, Sheik Hamad Jassim ibn Jaber al Thani, equivocated when asked if Qatar would send troops to Bahrain, saying, “at the present time there are liaison officers. There are no individuals or a full force, but this issue is under consideration.”

And a Kuwaiti newspaper reported that Shiite members of the Kuwaiti parliament objected to sending a Kuwaiti contingent.

Some Bahrainis are questioning why the Saudi troops were called in.

“Why are they in our country?” asked Ramadan, the novelist. “It’s an internal issue. We are not being attacked by a foreign country, like when Saddam went into Kuwait. We are citizens asking for political reform and this happens in every country. So why are we opening our country to other armies?”

Meanwhile, Iran escalated its rhetoric against the Saudi intervention, with President Mahmoud Ahmadinejad calling it "foul and doomed."