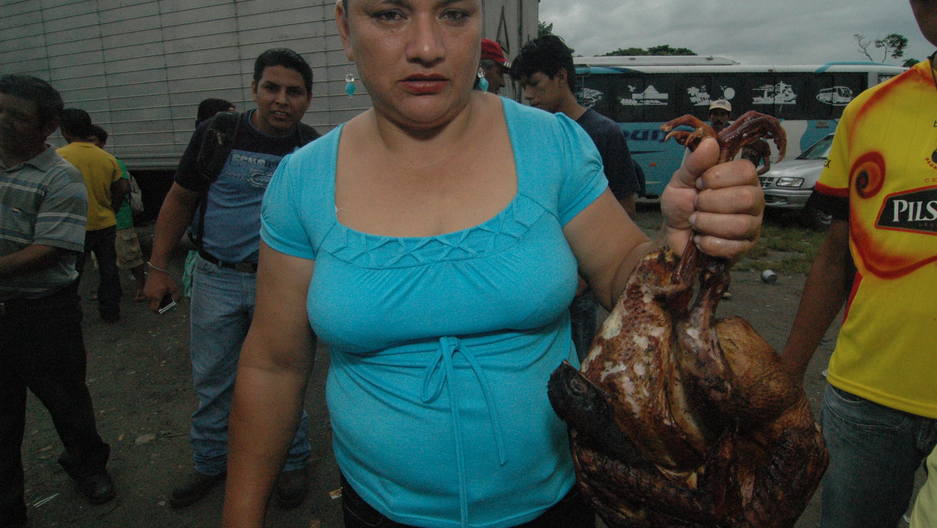 At an open-air market on the bank of the Napo River in eastern Ecuador, a group of men bid on smoked wild animal parts offered for sale by four native Huaorani women. The women have just arrived here in the village of Pompeya by motorized canoe from their territory across the Napo. Within a day or two, the meat from their rainforest home will be served in restaurants across Ecuador’s Amazonia region.

The Pompeya market is the only regular bushmeat bazaar in Ecuador, and business is brisk. A recent report estimated that about 12 tons is sold here every year. Quito-based Biologist Esteben Suarez, who wrote the report, says nearly 50 species are traded at the market, including the agouti—a large local rodent—wild pigs, birds, reptiles and fish. Suarez says the numbers are growing, and the hunting is starting to take a toll.

“They’re pretty much catching every single monkey that they can get their hands on,” Suarez says.

He’s worried about the impact on animal local populations, but he’s more concerned about the overall health of the forest. Big mammals like the agouti perform critical jobs in a rainforest, like dispersing seeds and controlling seed-eating rodents. A forest without its big mammals could be an ecosystem in trouble.

The problem is especially acute because of where the Huaorani live. Their forest territory is in what’s now Yasuni National Park, which harbors among the greatest variety of animal and plant life on Earth. Among its hundreds of animals species are troops of common howler monkeys and rare mammals such as jaguars and pumas.

The Huaorani have hunted in this forest for centuries but until recently only to feed themselves. What’s happening now is different.

Vargas says the Huaorani have the right to hunt, but only for subsistence. Commercial hunting is not permitted, which may be why it’s difficult to find any Huaorani willing to talk about the bushmeat trade.

The Huaorani have been selling bushmeat to outsiders since the 1960s, when Ecuador began to open its Amazonian lowlands to oil drilling. The Huaorani developed an appetite for modern goods, and hunting earned them cash to buy things.

But it was a new road that turned the new commercial hunting from a small problem into a big one.

The road was built by an oil Company in the 1990s, and was touted at the time as ecologically friendly, because access would be tightly controlled. That has mostly prevented the kinds of problems that have followed new forest roads elsewhere, such as homesteading and clearing of the forest by outsiders. But it seems no one foresaw that the road would become a bushmeat superhighway. It created an easy route out of the forest for Huaorani hunters, including free transportation. Any Huaorani can hitch a ride on an oil company vehicle.

Biologist Suarez says that means hunters can bring out a lot more meat.

“If you’re walking, you can’t carry much more than two wild peccaries on your back and that’s it,” Suarez says. “You don’t hunt any more.”

“But if you know that there is going to be a truck that will come eventually through the road, and you can transport that much more meat, then you kill like the whole troupe of peccaries.”

Suarez says commercial hunting in the Yasuni forest is simply not sustainable.

Wildlife official Javier Vargas agrees, but he says there are no plans to shut down the meat market.

Vargas says the government has already tried seizing all the animals in similar markets elsewhere, and that it doesn’t work. Instead, he says the environment ministry plans to join forces with other institutions to help to fight the issue in a more strategic way. Among other things, they’re trying to develop ecotourism and other sources of income for the Huaorani,

Wildlife scientist Esteban Suarez is cautiously optimistic about such plans. But he says the Ecuadorean government will need to work creatively to protect the forest and its wildlife while also respecting the rights of the people who live there.

This report was supported by the Pulitzer Center on Crisis Reporting and the Whole Systems Foundation.