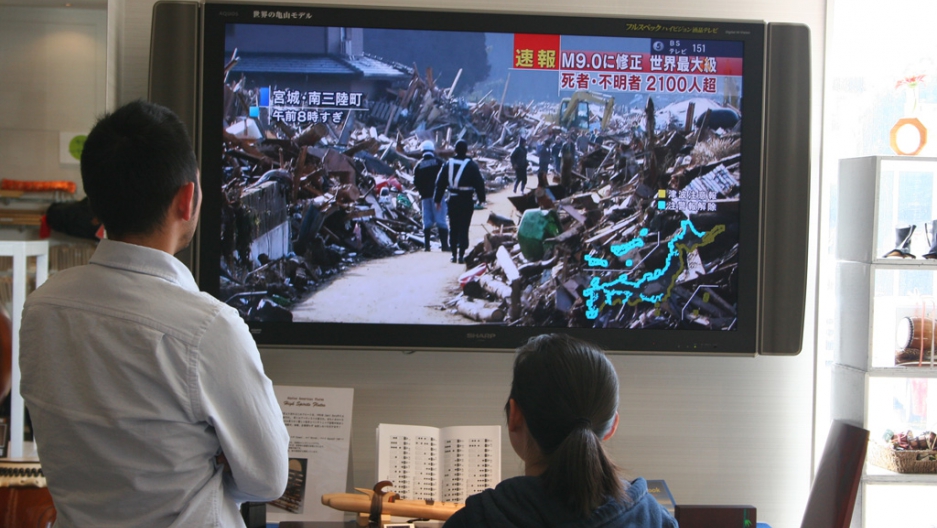 KANAZAWA, Japan – Here on the western coast of Japan, news of the 9.0-magnitude earthquake and tsunami that struck just a few hundred miles away reached many the same way it did people overseas: through news reports and on TV.

Throughout the weekend, Japanese news channels showed images of the devastation 24 hours a day. Residents in and around Kanazawa watched television inside their cars, homes and offices. Many couldn't believe what they saw and stared at video footage in disbelief.

But while they may be far away, residents here are not unaffected. Cities and towns all over Japan are sending rescue teams of firefighters and emergency workers to the disaster zone.

On Monday, over 20 aftershocks rattled Japan, some as big as 6.2 on the Richter Scale, and explosions at nuclear power plants in Fukushima turned this into a disaster that just will not stop.

In Hakusan City, a medium-sized city of 120,000 people near Kanazawa, fire station officials said they dispatched a team of rescue workers who will join about 100 firefighters from this area to assist with the recovery effort.

Inside the administrative office of a drum shop here, employees watched television and reacted in utter surprise to news of blasts at nuclear power plants and towns wiped away by the tsunami.

“It doesn’t seem like this is really happening,” said Katsuji Asano, 28, whose family runs a Japanese drum-making business. “Since we live in an area where we didn’t feel anything, watching the news really hits us, since it’s the only way we know what’s happening,” he said.

The news was hard to take for many people here. “When I turn on the television and watch the news, it seems like it’s happening in another country,” said Mizue Yamada, 25, who had planned to perform in a concert in Fukushima this weekend. If she had departed her home here just a day earlier, she would have been near the epicenter.

Many in western Japan are in tears, unsure how they can help, since they cannot go to the quake zone due to inaccessible roads. “I couldn’t stop crying when I saw the news,” said 65-year-old Junko Yoneda of Hakusan City. “I’m very thankful to all the other countries who are sending people to help,” she said.

Hiroko Kawasaki, a 51-year-old Osaka resident, is originally from Sendai, the worst-hit city on the eastern coast of Japan. Even now, she is unable to reach family members in Sendai, since phone lines are still down in parts of Japan.

“I’m trying to contact them on the internet, but many elderly people do not use computers and the electricity is out,” she said. “They need water, food and fuel. I would like them to live through this and see them in the near future.”

Many residents of Kobe, a large port city in central Japan, still have memories of the Great Hanshin Earthquake, which obliterated Kobe and killed over 5,000 people in 1995.

Kana Hattori, who grew up in Kobe and lives there now, survived the 1995 earthquake. Hattori said the images of Friday’s earthquake bring back terrifying memories.

“I was 13 years old when that earthquake happened,” she said. “It was horrible and scary. It happened at 5:46 a.m. and I was still sleeping.”

“When I saw the devastation and fires caused by the recent earthquake on television, it reminded me of the Kobe earthquake,” Hattori said. “I felt so uneasy. I was crying and praying for the people there,” she said.

Others from the Kobe area were also distressed to hear about an earthquake similar to what they experienced 16 years ago. Naoko Okada, a 23-year-old Kobe native, was in elementary school when the Great Hanshin quake crippled her city. “I understand how it feels,” she said. “When I watch the news of this disaster, it reminds me of first grade.”

Like many Japanese people living in regions that were not affected by last week’s earthquake and tsunami, she said she wants to help, but doesn’t know what she can do.

Naoki Togawa, an Osaka resident, also experienced the destruction and subsequent re-building of Kobe first-hand. He said the first 72 hours after the quake are the most critical. “Now is the time to find survivors and save people,” he said.

He said people who live in Kobe and nearby cities should help with the recovery and organize a volunteer effort. “The people in our area know the procedure because of the Great Hanshin earthquake.”

Nozomi Ikeno, a teacher in Osaka, said she felt guilty to lead her normal life when so many are suffering in northeastern Japan. “We are thinking of anything we can do for them, but we cannot find much to do at the moment, so we feel frustrated,” she said.

She has also decided to save electricity when she found out about major power outages in the affected areas. “My friend in Akita prefecture [in northern Japan] had a blackout all night the day of the earthquake,” Ikeno said.

With phone lines down throughout the affected region, many are using email, Facebook and Twitter to send updates. On Monday, Facebook circulated an official message to Facebook users in Japan about scheduled blackouts in Tokyo and nearby regions. The message described three-hour-long blackouts in several prefectures and irregular train service in Tokyo.

Residents here want to try to help affected areas by using less electricity, although it's not certain whether these measures will help. “I’m saving electricity by not using it at all. I’m not turning on anything,” said 18-year-old Miyu Nomura inside a shopping center near Kanazawa. Nomura said she will begin college next month in nearby Niigata prefecture, an area that was badly damaged by the earthquake. Her mother and grandmother stood next to her, and explained how they were worried about sending their daughter to an area that is still experiencing serious aftershocks.

People in other parts of Japan are depressed, shocked and saddened by the news, especially since they are unable to travel to the epicenter and help with the rescue. “Watching the television made me very sad, and I heard the damage was getting worse and worse,” Ikeno said.

Many are also scared what will happen next. Fear of more earthquakes and radiation around nuclear power plants has worried people all over the country.

“This is a major catastrophe in Japan," said Naoki Togawa of Osaka. "The entire country is in jeopardy.”