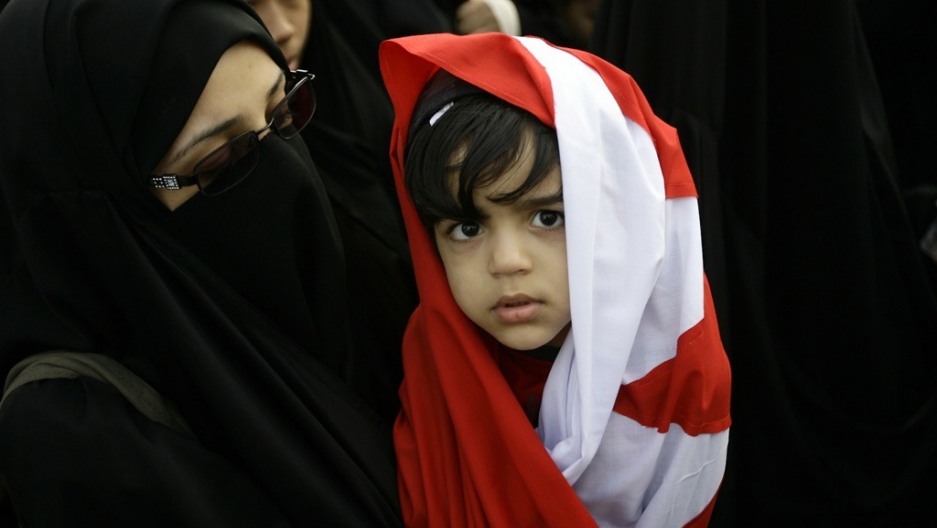 A Bahraini girl wrapped in her national flag takes part in an anti-regime rally at Pearl Square, the focal point of demonstrations in Manama, on March 1, 2011.
Credit: Joseph Eid
Share

RIYADH, Saudi Arabia — Saudi Arabia dispatched a battalion of National Guard troops to Bahrain Monday as part of a collective action by its five Gulf neighbors to help the island state quell a month-long, popular uprising and regain control of its streets.

A Saudi official said that the 1,200 Saudi troops, sent after a request for assistance from Bahrain’s king, will be used “to safeguard government buildings and make sure the protesters cannot disrupt normal economic and social life of the people.”

The military intervention is a joint effort by the six-member Gulf Cooperation Council, which also includes Kuwait, the United Arab Emirates, Qatar and Oman. Those four states “will all be contributing symbolically” by sending small contingents to Bahrain, the Saudi official said.

The Saudi deployment came a day after violent clashes between anti-government protesters, riot police and government supporters left Manama, the Bahraini capital, in chaos. At one point, the protesters shut down the city’s financial district.

The decision of Riyadh to send troops into Bahrain also is meant to send a message to both Iran and the United States to not interfere in the internal affairs of the country, added the Saudi official, who declined to be named because he is not authorized to speak to the press.

“Basically, it’s a signal to the Iranians and [a response to] all these statements coming out of [U.S. Defense] Secretary [Robert M.] Gates,” he said.

In a visit to Bahrain Saturday, Gates told Bahrain’s King Hamad bin Isa al-Khalifa and Crown Prince Sheik Salman bin Hamad al-Khalifa that they needed to speed up reforms and make meaningful concessions to the opposition, according to news agencies.

The opposition, which has staged street protests for a month, is demanding an end to long-time discrimination against Bahrain’s Shiite citizens, who make up 70 percent of the population, as well as democratic reforms.

While some protesters want steps that will lead to a constitutional monarchy, others are demanding abdication by the ruling Al Khalifa family, which has led Bahrain for two centuries.

The battle has taken on a sectarian cast because the monarchy is Sunni Muslim.

"I told both the king and the crown prince that across the region I did not believe there could be a return to the status quo and — that there was change, and it could be led, or it could be imposed," Gates told news agencies after his visit to Bahrain. "Obviously, leading reform — and being responsive — is the way we would like to see this move forward."

Bahrain has long been a close U.S. ally and hosts the headquarters of the U.S. Navy’s Fifth Fleet.

The Saudi official said that his government did not appreciate Gates “flying into Bahrain and saying the whole region has to change, telling the Crown Prince he will do this and if not, the Iranians” will take advantage of the situation. “We know all this.”

But the Saudi intervention is more than a signal to Iran and Washington. It is also likely meant to strengthen Riyadh’s hand in shaping the outcome of Bahrain’s current crisis. That outcome is crucial because it will impact the kingdom’s own Shiite minority, which also complains about discrimination.

“Saudi Arabia is acting in self-interest because what happens in Bahrain has direct implications for Saudi Arabia — it cannot simply avoid intervention,” said Fares Braizat, an analyst at the Qatar-based Arab Center for Research and Policy Studies.

By sending in troops, the kingdom is sending “a very strong sign that it will not allow significant change to happen in Bahrain,” Braizat added.

As in the rest of the Arab world, where unusual and sometimes unprecedented events have been unfurling for several months, including the ousting through peaceful protests of two Arab leaders in Egypt and Tunisia, and a civil war in Libya, today’s action in Bahrain is also a first.

“Here we have a situation of sectarian conflict that has risen to such a degree that it’s provoked GCC intervention,” said Theodore Karasik, director of research at the Dubai-based Institute for Near East and Gulf Military Analysis. “That’s not happened before.”

Mustafa Alani, an analyst at the Dubai-based Gulf Research Center, said he also saw the Gulf Cooperation Council’s decision to assist Bahrain militarily as a message to Washington that, stated bluntly, amounts to this: “It’s none of your business.”

“There is an impression that the U.S. feels it can wash its hands of a situation in ten minutes,” said Alani, adding that U.S. intelligence assessments of what’s happening in Arab countries are “always wrong.”

The Gulf states’ move today follows their pledge last week to give $10 billion in development assistance to Bahrain and another $10 billion to Oman — which also been hit with violent protests — over the next ten years.

With most of its neighbors facing people in the street demanding political reform, Braizat said, the Gulf wants “to keep the fire away from its own bedroom.”