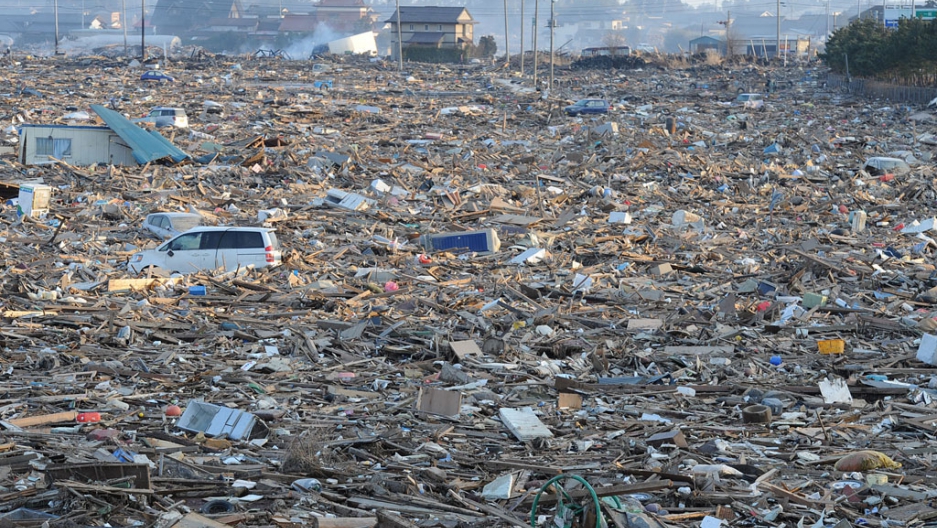 Debris cover a large area in Natori, near Sendai in Miyagi prefecture on March 13, 2011 after the March 11 earthquake and tsunami.
Credit: Mike Clarke
Share

TOKYO, Japan — Japan is facing its worst crisis since the second world war, the prime minister, Naoto Kan, said on Sunday as tens of thousands of troops and rescue workers descended on areas devastated by Friday’s earthquake and tsunami.

In a televised address to the public, Kan appealed to the country to come together in their time of crisis, and predicted the arrival of a Japanese-style New Deal sparked by huge demand as it recovers from the disaster.

“This is the worst crisis in Japan’s 65-year postwar history,” Kan said. “All of the people of Japan face a test as to whether they can overcome it. Together, I think we will.”

Three days after a vast stretch of Japan’s northeast coast was shaken by an 9.0-magnitude earthquake and tsunami more than 30 feet in height, fresh footage of the disaster zone suggested that the death toll could easily top 10,000.

About 9,500 people were missing in the coastal town of Minami Sanriku — more than half its population — while hundreds were thought to have been drowned in other communities that were swept away by the wall of water that followed Friday’s quake, the biggest in Japan’s history.

The public broadcaster NHK said 2,700 homes had been destroyed in Arahama in the same prefecture, while further north, 5,000 homes were under water in Rikuzen-Takata, in Iwate prefecture.

The country woke on Sunday to the grim news that the No. 3 reactor at the Fukushima Daiichi plant had suffered a cooling system failure that, if left untreated, could lead to meltdown and the release of large quantities of radioactivity.

Those renewed fears of a serious nuclear accident came a day after a building housing another overheating reactor at the plant exploded, sending the roof flying and causing the walls to crumble.

The plant’s operator, Tokyo Electric Power (Tepco), said it had started relieving pressure on the No. 3 reactor and pumping in water and boric acid in an attempt to prevent it from reaching criticality.

The government’s top spokesman, Yoichi Edano, said the reactors — two of six at two plants in the area with cooling problems — had released small quantities of radioactivity, but added there was no threat to people living in the area.

Edano told reporters that the core of the reactor may have been deformed due to overheating but played down fears of a meltdown.

At least 22 people are known to have been exposed to radiation and were being treated in hospital; Japan’s nuclear and industrial safety agency said that as many as 160 people may have been exposed.

As a precaution, the government began evacuating more than 200,000 people living within a 20-kilometer radius of two Fukushima power plants and set up a center to screen for radiation poisoning.

The automatic shutdown of four nuclear plants in the quake-affected area is already causing serious disruption to the country’s energy infrastructure.

From Monday, areas covered by Tepco will have to endure staggered three-hour power cuts to prevent prolonged blackouts. The measure is expected to stay in place until the end of April.

Edano said the government would draw on a 200 billion yen ($2.44 billion) contingency fund this month to pay for relief measures.

The long-term economic costs of the disaster will be more difficult to compute, however.

The Bank of Japan has vowed to do all it can to ensure market stability and the Tokyo stock exchange will open for business on Monday.

The country’s big three car manufacturers, Toyota, Nissan and Honda said they would suspend all production from Monday but were unable to forecast when operations would resume.

The huge effort under way to rescue survivors beneath buildings or left stranded by the tsunami is already bringing results.

Kan said about 12,000 people had been rescued so far, and helicopters took emergency food supplies to three devastated areas of Miyagi prefecture.

The government has sent 120,000 blankets, 120,000 bottles of water and 110,000 liters of gasoline to the affected areas, along with bread, rice balls, instant noodles and diapers.

According to the official count, more than 1,400 people were killed, including 200 people whose bodies were found on Sunday, and another 1,700 were injured. At least 1.4 million households had gone without water since the quake struck and some 2.5 million households were without electricity.

The tragedy drew offers of practical support and aid from more than 70 countries, including the United States, Britain and China. Two U.S. aircraft carrier groups reached the affected coastline on Sunday, poised to join a multinational effort led by 100,000 members of Japan’s self-defense force.

Helicopters have started flying in with deliveries of food and water from the nuclear-powered carrier the USS Ronald Reagan.