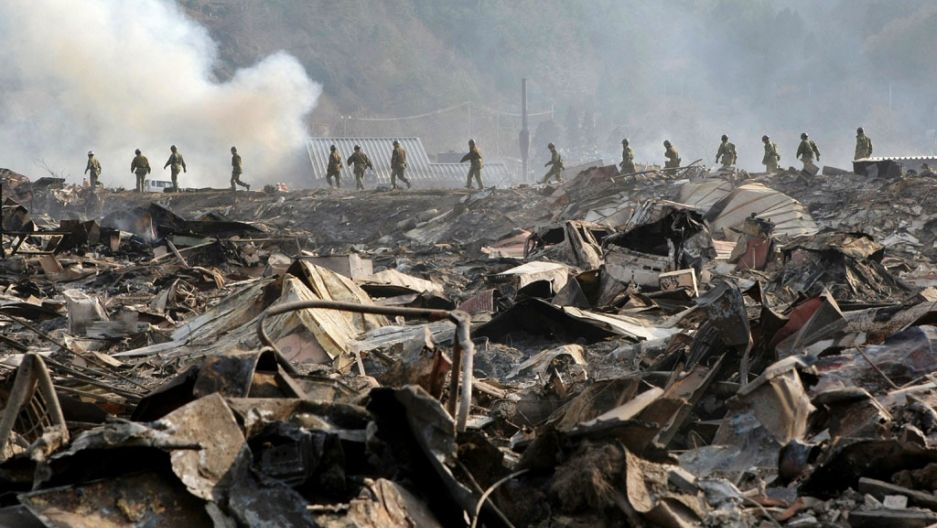 BOSTON — Japan first suffered the most destructive thing nature could deal, an 8.9 earthquake followed by a 30-foot-high tsunami on Friday, only to be afflicted now with melting nuclear reactors and seeping radiation. For the people of Japan, it all seems doubly horrifying, given that they, alone, suffered the worst that mankind can deliver: a nuclear bomb attack 66 years ago.

The world first learned of the effects of radiation on a population following the dropping of “Fat Man” and “Little Boy,” as the first and only atomic bombs dropped in anger were code-named. The cities of Hiroshima and Nagasaki were instantly destroyed on Aug. 6 and Aug. 9, 1945.

Japan, one of the world’s most organized societies, has mobilized quickly to contain the earthquake damage to their nuclear plants. Citizens have been issued iodine to protect their thyroid glands. People near the nuclear plants have been warned to cover their skin, put wet towels over their faces, and keep their windows and doors closed. By all accounts the radiation leaks will be contained at a level well below the Chernobyl catastrophe a generation ago. But it could be touch and go.

Japan knows all about the side effects of atomic radiation. The radiation released from the bombs of 1945 turned “many survivors of the initial blast into progressive invalids who suffered loss of hair, bleeding gums and debilitation until they died weeks, months, even years later,” as Life Magazine wrote. The memories of the clocks and watches frozen at 8:16, when the first atomic bomb landed are all too vivid.

This weekend’s explosion at the Fukushima Daiichi Nuclear Power Station, and the lesser damage done at Daini, have caused nuclear skeptics to say: "I told you so," especially those who warned against building nuclear power facilities in earthquake zones. There will be second thoughts in countries highly dependent on nuclear energy, such as France, and elsewhere in countries looking for ways to reduce dependency on oil.

The birth of the nuclear age took place in the cellars of Columbia University’s Pupin Physics Laboratory in 1939, where scientists succeeded in splitting atoms of uranium, which had the potential to unleash large amounts of energy. Work was in progress on similar projects in other countries, including Germany, at the time.

On Aug. 2, Albert Einstein wrote a famous letter to “F.D.Roosevelt, President of the United States, White House, Washington, D.C.” In it, Einstein wrote: “some recent work by E. Fermi and L. Szilard, which has been communicated to me in manuscript, leads me to expect that the element of uranium may be turned into a new and important source of energy in the immediate future. Certain aspects of the situation which has arisen seem to call for watchfulness and, if necessary, quick action on the part of the Administration. I believe therefore that it is my duty to bring to your attention the following facts and recommendations. “ Roosevelt set up an advisory committee with a budget of $6,000.

Within a month World War II had begun. And a month before Pearl Harbor, when the United States entered the war, British and American scientists were able to advise Roosevelt that a bomb with “superlative destructive power” was possible.

Life Magazine had taken a photograph of the atom-splitting process in Columbia’s lab, and wrote: “A new age of power is 50 years away or just around the corner." The story and the photograph were buried inside the Aug. 24, 1939 issue, too unimportant to be listed in the table of contents. But now the race was on, and in an unprecedented marshaling of scientific resources, the “Manhattan Project” went to work. Mercifully, the Germans turned out to be on the wrong scientific track.

Six years and four days after Einstein wrote his letter to Roosevelt, an atomic bomb was being dropped on Hiroshima. Sixty thousand people were killed in an instant. When the Japanese did not accept President Truman’s demand for surrender, a second bomb was dropped over Nagasaki. The American occupation army censors would not allow photographs of the destroyed cities to be published until the end of the occupation in 1952.

Nuclear power as a source of peaceful energy would have to wait; not just around the corner, but not 50 years either.

Today the world waits with baited breath to see whether a belligerent Iran will become the latest to develop the awful destruction of nuclear weapons, and looks to Japan to bring the latest nuclear power disaster under control.

So far, no one has died from nuclear leaks in Japan while thousands have been killed by the tsunami. And Japanese officials have been quick to proclaim that a major health risk from radiation is not anticipated. But citizens have been exposed to radiation, and some are sure to die from it. The leaking radioactive matter and the near meltdowns of nuclear reactors hold special horrors in Japan where the creeping death of radiation sickness was first observed.