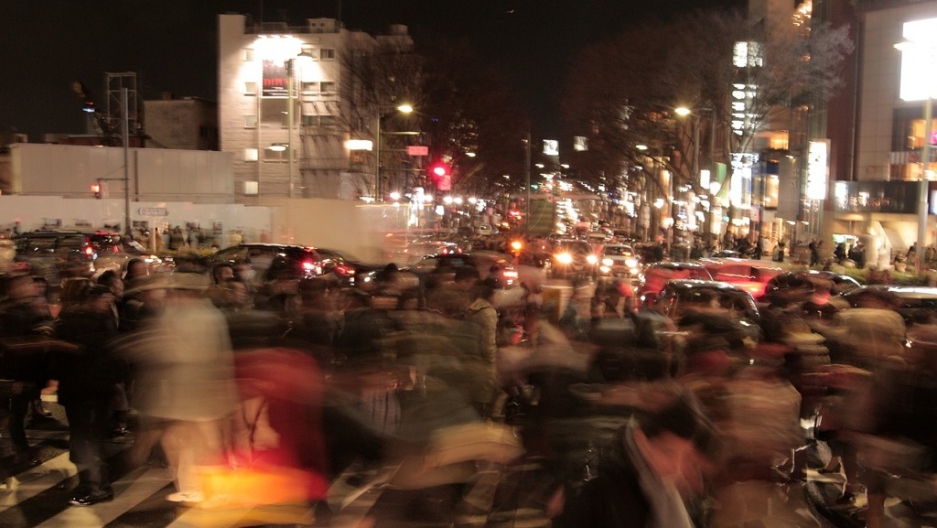 Commuters make their way after train services are suspended after an 8.9-magnitude earthquake on March 11, 2011 in Tokyo, Japan.
Credit: Koichi Saito
Share

For answers to your earthquake and tsunami questions, we asked Dr. Ray Coish, professor of geology at Middlebury College.

GlobalPost: Some people on the internet are blaming the tsunami on a “supermoon” — a full moon that’s closer than usual to the earth. A supermoon has been predicted for March 19, and they point out that the tsunami off Indonesia also occurred just before a supermoon. Does the moon have anything to do with this earthquake and tsunami?

Dr. Ray Coish: The moon’s orbit is elliptical, so it’s not unusual for the moon to come closer or go farther from the earth. But that has nothing to do with an earthquake or tsunami. The lunar effects are just so minute compared to the energy needed to move the earth that the moon has no impact at all.

The earthquake is caused by the movement between two plates. Japan lies above what we call a “subduction zone,” where an ocean plate is sinking underneath a continental plate. This is happening around much of the Pacific rim, where the ocean is getting smaller — of course, at a very slow rate, over the course of millions of years.

The tsunami is caused by the sea floor moving. The tidal effect from the moon won’t affect a tsunami either. There's no connection.

GlobalPost: Can you explain the giant whirlpool off Japan’s coast?

Coish: It’s hard to say for certain at this point, but it’s probably related to the shape of the sea bottom where it was found. Any wave can end up as a whirlpool. It’s a large-scale eddy, similar to what you might see on a river or a smaller bay.

In this case, the amount of water sloshing around is tremendous, which is causing this giant eddy.

GlobalPost: What about climate change, does that have any effect?

Coish: No. The earthquakes are from miles below the surface. Climate has no impact.

GlobalPost: How far down?

Coish: This one is from a little less than 20 miles down. That’s fairly shallow for an earthquake, which explains why there’s so much damage. The closer to the surface, the more the buildings, roads and people will feel the shaking.

Likewise, in California, almost all the earthquakes are shallow, because there, two plates are moving past each other, and this happens at a relatively shallow depth. California’s earthquakes would be much more damaging, but the state has excellent building codes.

GlobalPost: For decades no one had heard of a tsunami. Then in 2004 there was a tsunami off the coast of Indonesia. Now it’s Japan. What’s going on here, and how often do these occur?

Coish: This is a coincidence, but it’s nothing unusual. For a tsunami, the epicenter of the earthquake has to be in the ocean, and the sea floor has to break, moving up or down or both. When the sea floor moves, it displaces a huge mass of water. As the water approaches the shoreline and the sea shallows, it can become a huge wave with devastating force.

Tsunamis have been going on forever. There were tsunamis in Hawaii in 1960 and 1944. The 1960 earthquake in Chile, the largest ever recorded, had a tsunami as well. The devastation in Indonesia in 2004 brought them to light. Yet there’s no immediate relationship between these events. If a fault breaks through the ocean floor, that creates the tsunami. You can also get tsunamis from giant landslides off the continental shelf, but that’s rare.

GlobalPost: Okay, is there a connection between this and the volcano in Hawaii that’s been erupting lately?

Coish: No, I don’t think so. The volcano in Hawaii has been erupting continuously since 1982. That’s a very stable situation. The magma is always moving upwards. Sometimes it’s quiet, but when it finds a fracture it comes to the surface.

GlobalPost: Are we getting any better at predicting earthquakes?

Coish: Unfortunately, we’re not getting any better at predicting earthquakes. In the 1970s and 1980s there was a lot of hope that we were making progress. We can now tell, for example, that California will probably have an earthquake of 6 or greater in magnitude in the next 20 years. Exactly when or where on the fault will be is still an open question. We can’t narrow it down to days or months or years. Magnitude is even harder to predict.

Incidentally, Japan has the world’s finest building code and labs for predicting earthquakes. That’s where the state of the art is.

GlobalPost: Could there be a tsunami from a California quake?

Coish: There’s very little chance of that, because at the San Andreas fault you have two plates sliding past one another, rather than one subducting below another. So it would be unlikely to break the seafloor.

Condensed and edited by GlobalPost.