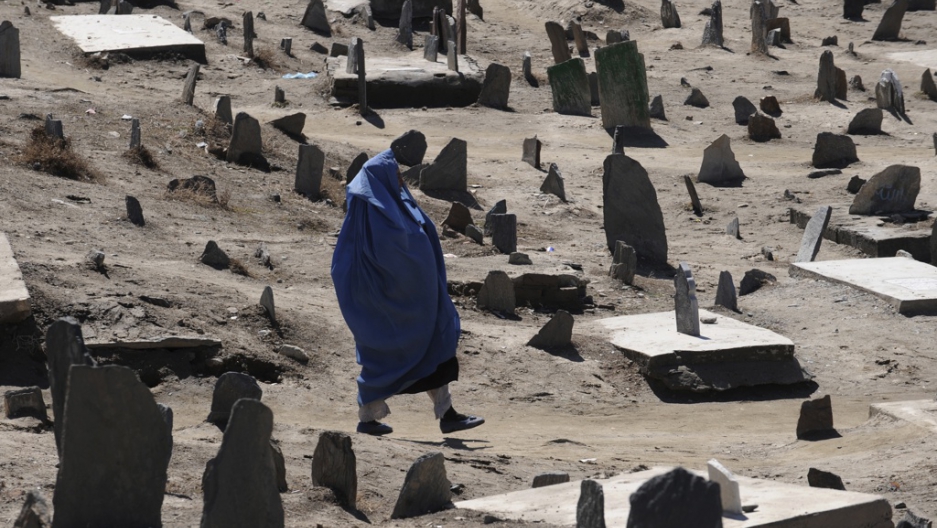 An Afghan woman walks in a Muslim cemetery in Kabul on March 9, 2011.
Credit: Shah Marai
Share

KABUL, Afghanistan — The only thing everyone seems ready to agree on is that the death of Yar Mohammad Karzai, a cousin of the Afghan president, is terrible news for U.S. forces still reeling from their last “mistake” — an airstrike on a group of young boys in Kunar province that killed nine and left a tenth in serious condition.

According to witnesses, Yar Mohammad was shot in the head during a night raid on his compound in Karz, a village in Kandahar province and the familial seat of the Karzai family.

The International Security Assistance Force (ISAF), made up of NATO and U.S. troops, maintain that Karzai presented “an imminent danger” to military forces and was “engaged” according to the battle rules now in force.

But reports from the scene give a somewhat different picture: the “imminent danger” came in the form of an AK-47, which, according to Yar Mohammad’s relatives, the elderly man had grabbed in response to a helicopter landing in his backyard in the middle of the night and armed men breaking into his house.

Weapons are almost universal accessories for Afghan households in conflict zones. Pistols, AK-47s, even hand grenades can be found in the majority of homes, although the grenades are usually reserved for fishing.

The ISAF Joint Command (IJC) press center will not comment further on the incident, only saying that an investigation is ongoing at this time.

The killing highlights the growing concerns about international military operations in Afghanistan, particularly the night raids that are almost invariably the work of U.S. Special Operations Forces.

Ahmed Wali Karzai, the president’s half brother, who is chairman of the Kandahar Provincial Council, confirmed the death to local and international media, saying that it was a “mistake” for which NATO had apologized.

“The prime target was not actually (Yar Mohammad),” he said.

Indeed, the IJC preliminary reports said that the operation had “captured a Taliban leader, killed one armed individual and detained several suspected insurgents during … operations in Kandahar City.”

The “armed individual” was Yar Mohammad, originally and erroneously identified as the father of the Taliban leader. And the operation did not take place in Kandahar City, but in Dand district, about three miles away.

President Hamid Karzai has not yet issued any of the thundering denunciations with which he usually greets news of NATO attacks on civilians. His spokesman, Waheed Omar, told the media that the president knew of the death and "was extremely sad, just as he's sad over any incident that takes the life of any innocent Afghan civilian."

But there may be more to the story than that.

In an interview with the New York Times, Mohammad Karzai, a cousin based in Maryland, raised the prospect that the killing was somehow part of a broader conspiracy, engineered by another Karzai cousin, Hashmat, who owns the Asia Security Group, a private security company based in Kabul.

Yar Mohammad, who is reported to be in his early 60s, was involved in a blood feud with another branch of the Karzai family. Yar Mohammad allegedly killed Hashmat’s father, Khalil, in the early 1980s, in Pakistan, because Khalil’s sister had broken off an engagement with him that had been arranged when they were both small children.

In 2009, Yar Mohammad’s 18-year-old son, Waheed, was shot and killed in Kandahar. Before he died he allegedly told relatives that it was Hashmat who was responsible.

Blood feuds are not uncommon in Afghanistan; the 2009 shooting raised eyebrows because of the notoriety of the family, but did not cause a huge fuss outside of the Karzai family.

This time may be different. Family members claim that Hashmat used his security connections to arrange the killing of his cousin and sworn enemy, Yar Mohammad, by feeding false information to the U.S. forces.

NATO often relies on tips from the local population to identify Taliban insurgents. Those with the ear of the international military forces can sometimes abuse this privilege to settle personal scores.

But according to Thomas Ruttig, a senior analyst and co-founder of the Afghanistan Analysts Network, the problem is not just an over-reliance on sketchy intelligence, but a wider misperception on the part of the international forces.

“This is not only about information,” he said. “I think it is a mentality widespread in the military: first, that our high-tech weapons are infallible. Then from time to time the human factor comes in, and human beings are not able to make the correct judgment. In Kunar recently, for example, ”are these people on the ground kids collecting wood or bearded Taliban?”

It has been a bad few weeks for the international forces: in addition to the nine dead boys in Kunar there have been other reports, vehemently rejected by ISAF, that up to 67 civilians were killed in air strikes in Ghazi Abad district, also in Kunar.

Unconfirmed reports from the Afghan media say that ISAF forces killed the speaker of the Kandahar Provincial Council in another night raid on March 11.

The whole question of night raids, air strikes, and other operations in which civilians often get caught has come once again to the forefront in Afghanistan. While foreign troops are responsible for a relatively small proportion of civilian casualties, it is these few high-profile cases that inflame popular sentiment.

According to most sources, including a U.N. report released this week, the vast majority of civilians — up to 75 percent — are killed by the insurgents. Foreign forces have taken steps over the past several years to reduce casualties to innocent Afghans in airstrikes, night raids and other types of incidents.

Former commander of U.S. and NATO forces General Stanley McChrystal, sacked in disgrace last summer, had made protecting civilians a priority, and the use of airstrikes had declined dramatically on his watch.

But his restrictive Rules of Engagement were not popular with the troops, and once General David Petraeus replaced him at the end of June, the use of air operations increased dramatically. This almost certainly will increase the civilian death toll.

Counting the dead is a complicated and controversial activity in a country where there has been no valid census for almost 40 years, where most people never receive birth or death certificates, and where large areas of the country are inaccessible to media or researchers because of security.

“We only count that which we see,” said U.S. Navy Rear Adm. Gregory Smith, the director of communications for NATO based in Kabul. He was speaking to Science Magazine about a new report on civilian casualties that has just been released by ISAF.

“We can do a tremendous amount of forensics, … [but] seldom do we see the actual bodies,” he added. “You can do over flights of cemeteries to determine any fresh grave sites and confirm or deny the numbers involved.”

But the Afghan practice of sometimes putting several bodies in one grave can make even that practice less than accurate, say many researchers.
There are also major incidents of civilian casualties that NATO has never acknowledged, such as the bombing of a village in Shindand district of Herat province in August 2008; the United Nations says over 90 civilians were killed; ISAF, after several months of pressure, finally admitted to 33.

Many other incidents were never recorded at all in the ISAF data base: a German airstrike that killed close to 100 civilians in Kunduz in Sepember 2009; and many operations in the south, including one in Helmand in 2007, in which up to 100 people, including many children, were allegedly killed by U.S. bombs dropped on a weekly picnic in Bughni village.

These incidents have contributed to a growing disdain for foreign forces on the part of the Afghans, say observers.

“Of course mistakes can happen,” Ruttig said. “Afghans will have another perspective on this. They have seen enough of these ‘mistakes’ and their relatives will not come back to life after an apology.”

The solution, said Ruttig, who has lived in Afghanistan for many years and speaks fluent Pashto, is to stop shooting and start talking.

“Use less military and more political means,” Ruttig advised. “Decrease the level of violence first, then … get closer to a comprehensive political solution.”