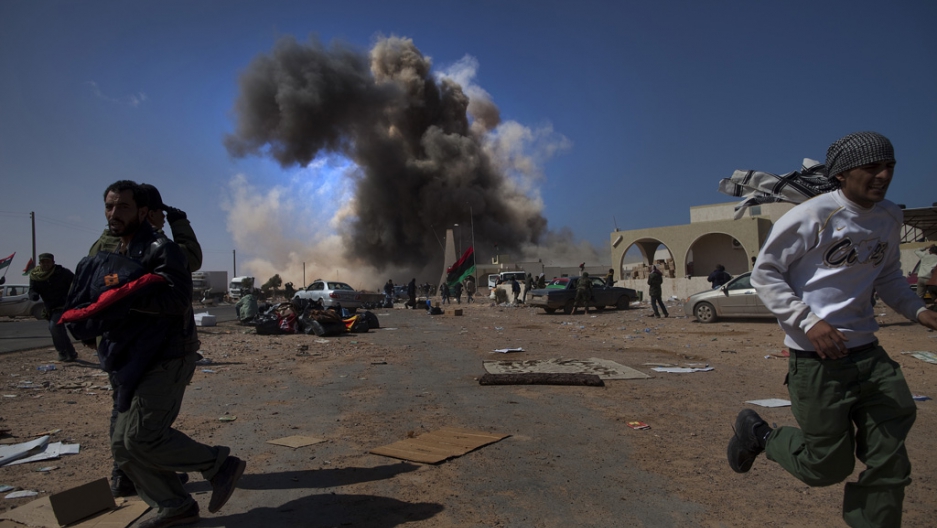 The fighting began during afternoon prayers. As the rebel fighters kneeled, their eyes to Mecca, blasts of rocket and tank fire began streaming toward the Ras Lanuf checkpoint. Government forces were attacking, pushing east from their positions in the city.

By the end of the day this position beside the oil refinery would be the scene of a chaotic and rapid withdrawal by the rebels.

But while the imam, Jawdah Al-Akhri, spoke — exhorting the rebels to fight hard, as well as chastising them for stealing a car and some petrol — the crowd remained bowed, their backs to the tank rounds coming towards them with increasing ferocity.

With a final burst of “Allah akbar,” or “God is great,” the prayers ended and the fighters again took up their guns, assembling to try to hold their position and keep government forces from pressing toward Brega and finally Benghazi, where the opposition government is based.

“Get down, get down!” screamed a fighter at one point, his hands waving. A jet streamed low over the compound before the sky exploded into a plume of black smoke. The bomb had dropped in the corner of the compound, blasting open the cement wall and killing two rebels.

“This is what Gaddafi does to his people,” cried a rebel, pointing to the bloody remains of what had moments before been a man.

Thick, black smoke pouted from an oil tank within the Ras Lanuf refinery that was hit. It mixed with burning tires lit by the rebels in an attempt to provide cover from air strikes, and the regular burst of mortar and artillery fire.

The Red Crescent Hospital on the outskirts of Brega reported at least five casualties, and dozens injured, including several journalists.

As the fighting draws out, the opposition’s numbers have diminished, dropping from approximately 1,000 fighters yesterday to just several hundred today. Only a few days ago rebels were promising to march on Sirte, Qaddafi’s hometown, and then on to Tripoli.

West of the capital, the resistance in Zawiya, which is close to Tripoli, seemed all but crushed, with residents of the city describing scenes of carnage, and counting women and children among the dead.

Misrata, the last remaining rebel holdout in western Libya, was reported to be calm but bracing for an assault. In Tripoli there were reports that tear gas was fired into the air by security forces today to disperse a crowd of worshippers near a mosque in the rebellious neighborhood of Tajura.

The Ras Lanuf retreat was sudden and chaotic. After more than five hours of fighting, government forces surged forward, brutally scattering opposition fighters and sending them scrambling for vehicles to escape.

Government forces, with supremacy in the air and a more organized army, appear to be gaining momentum as they push east.

Gaddafi's son, Saif al-Islam, said the government would be responding with full force to the rebellion, which has split the country and so far killed more than 1,000 people, by some estimates.

“It's time for action. We are moving now," he told Reuters on Thursday.

Mobile phone subscribers in Benghazi today received text messages appearing to originate from the Gaddafi regime saying the city would soon be recaptured.

At the current pace, government forces could overtake Benghazi well before foreign governments can agree on a strategy to help, something the fighters seem keenly aware of.

“Where is the West?” shouted an angry rebel crouching behind a sand dune as a jet flew overhead. “Why don’t they make a no-fly zone?”

As EU heads of government met in Brussels yesterday, Libya's insurgent leader warned that the hesitation to take direct action is providing breathing space for Gaddafi to continue his attempts to crush the uprising in areas around Tripoli and to move toward Benghazi.

"We ask the international community to shoulder their responsibilities," Mustafa Abdel Jalil, the head of the National Libyan Council, told the BBC.

"The Libyans are being cleansed by Gaddafi's air force. We asked for a no-fly zone to be imposed from day one, we also want a sea embargo," he said.