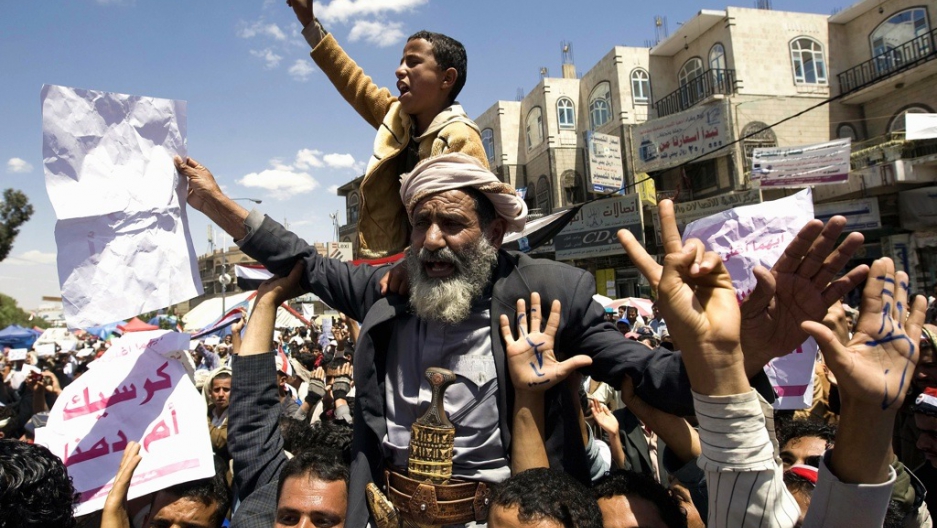 Yemenis protest against the regime of President Ali Abdullah Saleh in Sanaa on March 9, 2011, the morning after a Yemeni protester died of gunshot wounds after being hit when police opened fire overnight on anti-regime demonstrators in Sanaa, a medical official said.
Credit: Ahmad Gharabli
Share

SANAA, Yemen — Doctors from the scene of violent anti-government protests in Yemen’s capital Tuesday night said that what was originally thought to be tear gas fired by government forces on demonstrators might instead have been a form of nerve gas, which is forbidden under international law.

Military personnel opened fire and used what was originally assumed to be tear gas to disperse a group of demonstrators who were trying to bring additional tents into the protest area outside Sanaa University.

According to witnesses, the soldiers fired warning shots into the air before shooting gas — and in some cases live bullets — into the crowd, killing one and injuring at least 50.

Earlier reports indicated that the gas used was tear gas, but doctors who have been treating the wounded refuted that claim today.

“The material in this gas makes people convulse for hours. It paralyzes them. They couldn’t move at all. We tried to give them oxygen but it didn’t work,” said Amaar Nujaim, a field doctor who works for Islamic Relief.

“We are seeing symptoms in the patient’s nerves, not in their respiratory systems. I’m 90 percent sure its nerve gas and not tear gas that was used,” said Sami Zaid, a doctor at the Science and Technology Hospital in Sanaa.

Mohammad Al-Sheikh, a pathologist at the same hospital, said that some of the victims had lost their muscular control and were forced to wear diapers.

“We have never seen tear gas cause these symptoms. We fear it may be a dangerous gas that is internationally forbidden,” Al-Sheikh said.

One of the protest organizers, Rabie Al-Zuraiqi, 23, said he was struck by rubber bullets and gas during the attack.

“They say it’s tear gas, though it’s not. I can’t move my body. I went into a coma for more than four hours and I can’t see well now. I also have internal bleeding after being exposed to the gas,” he told GlobalPost.

Whether or not an illegal substance was used to gas protesters, Tuesday’s violence marked what appears to be a turning point for the country’s protest movement, which has dragged on for months.

Although there had been previous instances of violence, it had always been between plainclothed government supporters and anti-government protesters. The attack Tuesday was the first by uniformed police.

It was also the first time that live ammunition was used. Al-Zuraiqi said that a 30-year-old protester had died of internal bleeding after being shot in the back of the head.

In a makeshift hospital at the grounds of a mosque next to the university, volunteer doctors administered IV drips and treated bullet wounds on Tuesday night.

A surgeon probed a leg wound with forceps, while the man screamed, pulling out a fragment of metal.

"See this?" the doctor said, holding it up. "Do you see this? They are shooting people with live rounds." Another volunteer brought over a handful of empty shell casings.

In a corner of the mosque, a younger man screamed as a doctor poured coca-cola over his face to ease the pain from the gas.

After opening his eyes, the young man, Majid Al-Awaj, a protester from the northern province of Hajja, said the attack would only increase the strength of the revolt.

“We demand that Saleh be tried by the International Criminal Court,” Al-Awaj said.

At the university on Wednesday morning, protesters cleaned up from the previous night. A woman, crying, searched for her son, who she had sent to take food to the protesters but had never returned.

There have been daily anti-government demonstrations in Sanaa and other cities around the country since Egyptian President Hosni Mubarak's ouster on Feb. 11. During the past few weeks, 29 people have been killed in the unrest, according to international human rights groups.

President Ali Abdullah Saleh has said he will step down when his term ends in 2013 but has vowed to defend his government "with every drop of blood."

Watch video taken the night of the attack: