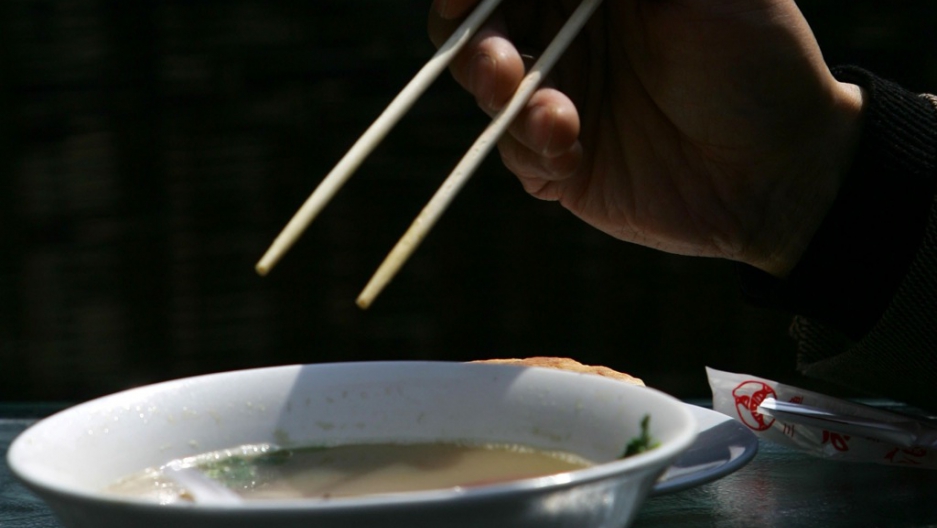 SANTIAGO, Chile — Ever ordered fried “wantanes” and “chop suey de pollo”? More and more Latin Americans are doing just that as China tries to quietly promote its food and culture in the region.

A bright red and yellow sign on the front of a Cantonese restaurant in Santiago spells out the restaurant’s name, "Los Chinos Ricos” (The Rich Chinese). It's one of almost 200 Chinese restaurants to have opened in Santiago over the last 30 years.

Ana Yao, whose Chinese father and Chilean mother founded the restaurant, said these days some of the neighborhood’s residents eat at her restaurant every week. “They come with their families,” she said. Chileans like Chinese cuisine because “it’s healthy food,” Yao said. “There are a lot of greens and everything is fresh.”

But it's not just enterprising businessmen who are behind the explosion of Chinese eateries — the Chinese government is now working with expatriate entrepreneurs and restaurant owners to promote Chinese food and culture throughout Latin America.

It’s hard to resist calling the trend "chopstick diplomacy.” After all, the promotion of lo mein and Peking dumplings is meant to be a demonstration of China's growing presence in the region.

China is undeniably weilding its soft power across the continent. Chinese companies spent much of the 1990s buying up resources in Africa, and many are now looking to broker deals in Latin America. China has launched billion-dollar loan and grant projects in Venezuela, Ecuador and Bolivia, and signed trade deals with countries throughout the region, becoming the most important trade partner of two of the region's strongest economies, Chile and Brazil.

In Chile, bright new malls and department stores are filled with products manufactured in China. China has recently emerged as the world’s biggest buyer of copper, Chile's biggest export and the lifeblood of the Chilean economy.

In August, China’s government sent a team of master chefs to teach a two-day training course for 60 Chinese chefs who work in Chile. The class, which was led by five expert chefs, focused on technical skills and ended with participants receiving honorary diplomas from the Chinese government.

Dong Chuanjie, a spokesman from China’s State Council, said the cooking course was part of a broader effort to promote Chinese culture in Latin America. Chinese restaurants in Santiago provide the most direct way for the city’s residents to gain exposure to China’s culture, Chuanjie said.

It is only since the mid-1990s that Chile has had any sort of meaningful relationship with its neighbor across the Pacific.

In a political ad in 1993, left-of-center presidential candidate Eduardo Frei, standing on a beach with the Pacific Ocean behind him, looked at the camera and said, “One of the principal objectives of our foreign policy is integration into the Asia-Pacific region.” Once elected president, Frei worked to help open trade relations with China, fulfilling a campaign promise to turn his country into a “natural bridge to Asia.”

Chile joined the Asia Pacific Economic Cooperation group in 1993 and worked steadily to foster ties with China and other Asian nations. In 2005 Chile became the first non-Asian country to sign a free trade agreement with China. Five years later when Chilean President Sebastian Pinera visited Beijing, China had already become the No. 1 buyer of Chile’s exports.

The budding relationship between China and Latin America did not go unnoticed by China’s most entrepreneurial citizens. Chile, with its reputation for stability and good governance, attracted a great deal of attention. Believing Chile to be a good bet, many chefs from China immigrated and set up shop in Santiago.

The emigrant Chinese chefs coming to Chile fostered goodwill with their new customer base by serving fried ham and cheese spring rolls, an adaptation of a popular Chilean empanada.

"Most people I know eat Chinese food twice a week," said Alfredo Merlet, a lifelong resident of Santiago. "Spring rolls, chow fun, and 'dragon's teeth' (a play on the Chinese name for sautéed bean sprouts), those are the favorite dishes here."

From the authentic noodle dishes served at the high-end Violeta de Persia restaurant to more moderately priced items at Los Chinos Ricos, Santiago's residents have plenty of options to sample a variety of dishes.

“Twenty years ago, Chinese cuisine was concentrated in high income neighborhoods, but now it’s more spread out throughout the city, even in middle and low income areas,” said Luis Valenzuela, a Chilean architect and urban planning expert.

And interest in Chinese and Asian cuisine is piquing all over Latin America, not just in Santiago, said Mariana Torres, an urban planning specialist from Bogota, Colombia.

"There were no Chinese restaurants ... or Thai or anything else," she said about her hometown. "Now there are tons of different restaurants.”

China’s government seems keen to make sure that expatriate Chinese chefs in Latin America do their best to act as ambassadors for the country and its cuisine. The goverment also conducted a culinary program in Costa Rica, another strategic trade partner.

China’s hope, it seems, is that the next generation of Latin Americans will grow up with an appreciation for China’s culture and will work to foster meaningful ties with their neighbor across the Pacific.

After all, said Dong Chuanjie, “Chinese cuisine, which has eye-catching colors, irresistible fragrance and rich taste, can help spread the Chinese culture overseas.”