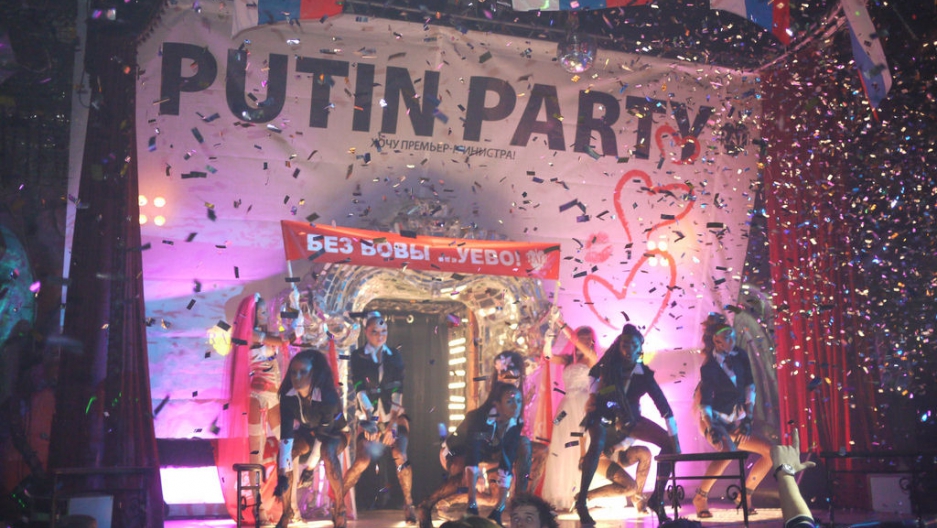 MOSCOW, Russia — What do you get when you mix a dozen strippers, a soundtrack of throbbing house music and chants of “only Putin, only sex!”? The ultimate celebration of International Women’s Day, Russian-style.

The March 8 holiday is one of Russia’s most celebrated. Yet nearly 100 years after it was first marked in Russia, it now works best to illustrate the sorry state of women’s rights in a country where chauvinism is largely admired, sexual harassment widely tolerated and domestic violence a subject that is all but taboo.

On Sunday night, hundreds of Muscovites packed a club called Rai (Paradise), to attend an International Women’s Day event called Putin Party. The honoree was in theory selected by a poll of female club employees asked to choose the sexiest man from a list of international celebrities. The idea was intended to provoke scandal: The use of Prime Minister Vladimir Putin’s name made the night the talk of the town. His spokesman came out to meekly denounce the event when it was first announced last week.

That the party went on anyway led many to think Putin wasn’t all that upset (what Putin wants, Putin gets). The stunt worked, and the club — it’s faux stone walls and gaudy trellises embellished with posters praising Putin — was packed to the brim until the wee hours of Monday morning.

Improper was one word for the party. Scantily clad and topless women danced upon desks mimicking the prime minister’s. Red speech bubbles reading “I want the prime minister” and “Vova, I’m with you!” were passed around — one stripper held one up to her crotch before continuing to sway and thrust. Giggling young women took turns sticking their heads into a cardboard cutout of a woman in a red dress riding backseat to manly Putin on a motorbike.

At two in the morning, the lasers cut out and the overhead lights dimmed. The droning beat of soulless house music suddenly went quiet and a male voice boomed over the stereo system: “Only Rai, only Putin, only sex!” Cue the floor show: five pants-less women standing in front of a sign reading “Putin Party: Without Putin, We’re F--ked,” waving huge red flags as the club’s DJ debuted a new song that sampled Putin’s infamous singing of Blueberry Hill last year.

Rai is not a strip club. Rather, it’s an average Moscow disco whose star peaked a couple of years ago, replaced by swankier sites with less gaudy design. Yet those, too, almost invariably feature half-naked dancers galore (sometimes caged, sometimes dangling from ceilings), despite the fact that half the clientele is women.

“What are the women supposed to do here?” one of my Western companions asked me. Judging by the crowd, the answer would seem to be: stare at the strippers and the pout your lips.

The Soviet Union and its subsequent fall have had a twisted effect on gender roles in Russia. During communist times, men and women were declared equal — according to socialist ideology, both were expected to contribute in the workplace and at home. In reality, Soviet women carried what has been dubbed a “double burden” — required to work and manage the home, while men were never really expected to live up to both sides of the bargain.

When the Soviet Union collapsed, many women embraced an uber-femininity, be it in style of dress or in their expectations of relations between the sexes (man buys things; woman consumes things)

Rarely is that more clear than in the lead-up to International Women’s Day. A host of polls are always released. This year, the Levada Center asked 1,600 men what they valued most in women. The overwhelming winner was thrift (56 percent), followed by good looks (39 percent), thoughtfulness (38 percent) and fidelity (37 percent). At the bottom of the list were: independence (6 percent), temperament (7 percent) and the ability to deal with misfortune (9 percent). For the record, only 31 percent thought a woman's intellect was important.

The poll also asked what characteristics most women exhibited: beauty and thoughtfulness (both 47 percent) led the pack; logic (7 percent) and a creative mind (8 percent) trailed near the bottom.