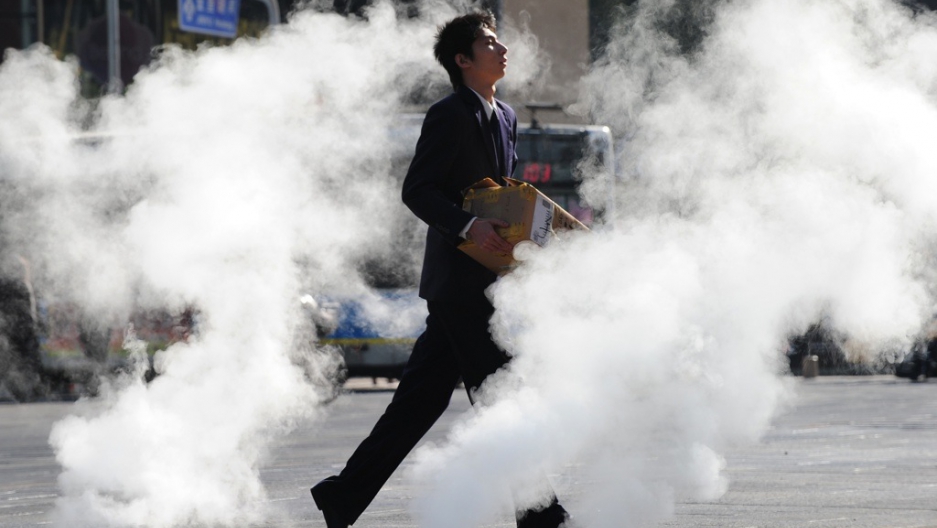 A businessman runs across a street as steam is emitted from underground on a cold winter's day in Beijing on Jan. 20, 2011.
Credit: Frederic J. Brown
Share

BEIJING, China — With single young men at the heart of Arab world revolt, China might seem a country ripe for uprising. But while it’s got millions of single young men, they don’t appear interested in amassing a movement for change.

China now has at least 20 million young men with no chance of ever finding a female partner, according to population experts. In short, there are too many men. Demographers predict the gender gap will grow to 35 million by 2020. The reason: China’s one-child policy and a culturally ingrained preference for male children, along with a rise in accessible ultrasound technology and sex-selective abortion, led to a staggering surplus of young men born in the 1980s and 90s.

The overall trend is beginning to change for new families, but there remains a bubble of young men that can’t be reversed or repaired. So why aren’t they rising up and causing trouble for the authoritarian regime of China? In short, they’re too busy.

Andrea den Boer, co-author of the 2005 book “Bare Branches,” an in-depth investigation of surplus males and related potential security issues in Asia, said China’s situation is different than that of Egypt, which suffers from what is know as a “youth bulge.”

China has the millions of single young men, but what it’s missing is massive unemployment and economic decline. With the world’s fastest-growing large economy, opportunity is abundant. Development has reached every corner of the country and work opportunities have begun taking tens of thousands of young Chinese men to Africa and other parts of the world.

“The bare branches in China could potentially mimic the effect of a youth bulge given the large numbers of males, but they would have to have a motivation for unrest,” said den Boer, referencing her book title, taken from a Chinese term for unmarriageable young men. “Given the relative stability of China and the continued economic growth and low unemployment in the state at present, China isn’t at risk for large scale unrest.”

Over two successive weekends, anonymous Internet posters have called for anti-government protests in China’s major cities, spurring a few hundred demonstrators on Feb. 20 in Beijing and another few hundred in Shanghai last weekend. The organizers have called for a third round this Sunday, but China’s security forces laid down such an overwhelming response last weekend, any actual turnout this weekend seems somewhat unlikely.

Certainly, large groups of shiftless young men are not likely to be coming together in Beijing or Shanghai — two of the country’s wealthiest cities. Dissatisfaction and unrest are more likely in far-flung provinces with looser controls and less economic development. In fact, China has an estimated 100,000 “mass incidents” every year, but they tend to arise over very local issues and are targeted at local government and companies.

“There is the potential for them, if present in large numbers in the same geographic area, to contribute to mass incidents,” den Boer said. “Some of the incidents that we see arise in China are related to ethnic or other issues, so we can’t attribute all of these incidents to the sex imbalance that has resulted from the one-child policy.”

In addition, a recently published study showed that young migrant workers in China contributed to more than their demographically fair share of crime. Though the study did not focus on gender, it noted that economically disadvantaged migrant workers born after 1980 were responsible for nearly half of China’s reported crimes last year, despite accounting for less than 10 percent of the general population.

Xie Jianshe, a professor of human right studies at Guangzhou University, said the numbers are even higher in the factory region of the Pearl River Delta, where 70 to 80 percent of the prison population is young migrants. Here again, economic opportunity is key.

“From my research, I’ve found that unemployment leads to most of the crimes among this group,” Xie said.

Thus far, none of this has led to a national movement. And with China’s security apparatus ramped up and firmly in charge, that’s not likely to change.