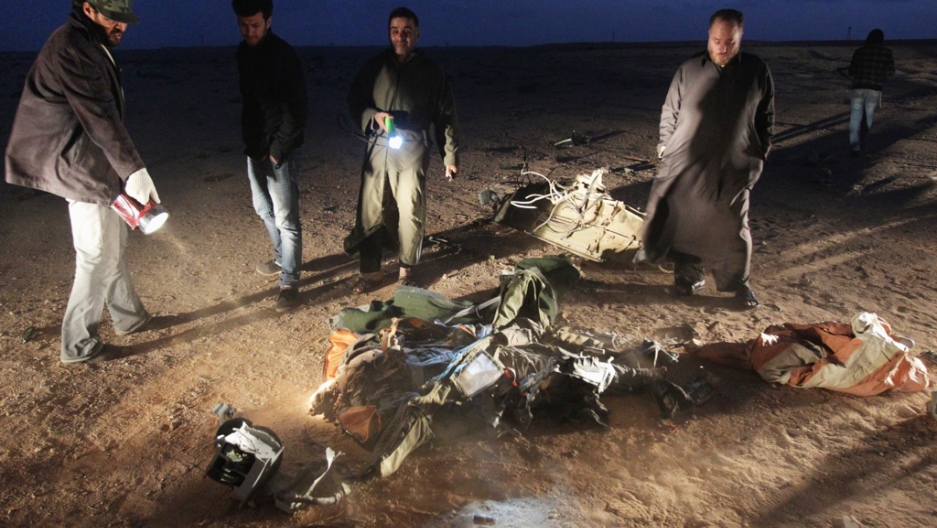 The remains of a jet fighter pilot lies in the desert March 25 2011 near Ras Lanuf, Libya. Opposition forces claim to have shot the Libyan government plane down while pushing troops loyal to Libyan leader Muammar Gaddafi further west towards the government stronghold of Surt.
Credit: John Moore
Share

RAS LANUF, Libya — Forces loyal to Muammar Gaddafi escalated their counteroffensive Sunday as they launched attacks on rebel-held cities in the west and fought off opposition forces attempting to make their way closer to Tripoli.

Gaddafi's ability to respond to the rebel forces with such a strong showing of force suggests that the country will not see the kind of fast, people-powered revolutions that recently brought down regimes in Egypt and Tunisia but is more likely on the path to a bloody civil war.

Ambulance drivers and doctors said at least 10 people died from the fighting, and a France24 journalist was wounded.

Gaddafi forces also attacked Misrata, the largest town controlled by rebels outside the opposition-held east of the country, Reuters reports.

"Today Misrata witnessed the toughest battle since the beginning of the revolution. Horrible attacks," one resident told Reuters by phone. "They came from three sides and managed to enter the town from the west and south but when they reached the center of Misrata the rebels pushed them back."

The defeat in Bin Jawwad comes a day after rebels took and held the strategic oil port of Ras Lanuf, 400 miles east of Tripoli. By taking Ras Lanuf, the rebels of the east had pushed closer to Gaddafi's capital.

Gaddafi's militia stormed the town of Zawiya, roughly 30 miles west of Tripoli, at about 6 a.m. on Saturday and attacked from both the east and west. Residents said Gaddafi's forces broke through rebel lines using heavy mortar shelling and machine guns.

“I am watching neighbors dying unarmed in front of their homes,” a resident told The New York Times. “I don’t know how many are being killed, but I know my neighborhood is being killed."

Another said: “Everything is burning. We don’t know from which side they are shooting us — from the buildings or from the streets. People are falling everywhere.”

Witnesses to the fighting said pro-Gaddafi snipers were shooting anyone who went outside or residents who ventured onto their balconies.

The counteroffensive against rebels in Zawiya began Friday when a pro-Gaddafi militia surrounded the town and opened fire on it. At least 30 were killed in the fighting, Al Jazeera reported.

Government security officers also attacked the town of a Tajura, a suburb of Tripoli, on Friday. They showered hundreds of protesters with tear gas and then, as international journalists watched, began shooting their machine guns. There were disputes on whether the officers shot in the air or at the protesters.

The protesters, many chanting "Gaddafi is the enemy of God" had defied heavy security to gather in the district after Friday prayers. Security forces used tear gas in an attempt to disperse the crowds.

Pro-Gaddafi and opposition forces also battled over the oil port of Ras Lanouf Friday, with rebel forces firing on a government helicopter. There were conflicting reports over who was in control of the town.

Al Jazeera said the fighting showed that both sides were trying to break a deadlock over the control of the country's eastern towns.

"The situation in the east of the country is really a stalemate, with anti-Gaddafi forces either unable or unwilling to advance further to the west and to try to take the fight closer to Gaddafi's strongholds like Sirte and Tripoli," the network's correspondent Jacky Rowlands said.

In Libya's second largest city Benghazi -- which has been held by rebels since the sustained rebellion began in mid-February -- witnesses said Gaddafi's forces had bombed an arms depot, according to Sky News. It quoted medics saying at least 27 people were killed in the attack.

Saif Gaddafi, a son of the Libyan leader who regularly speaks on behalf of his father's regime told CNN that the rebels were trying to foment civil war, but insisted they were heavily outnumbered.

He added: "The militia wants to control the oil."

Meanwhile, British authorities revealed they had seized a vessel carrying $160 million in Libyan currency that had been headed for Libya in violation of sanctions imposed by the United Nations Security Council.

Officials said the ship had been escorted into the British port of Harwich on Wednesday by a British Border Agency vessel, Reuters reported.

Britain's finance minister, George Osbourne, said that the vessel had been tracked by authorities for a week before it was taken into custody. He said a freeze on British-based assets belonging to Gaddafi and his family had been extended to include nearly 30 people.

"The financial net is closing in on Colonel Gaddafi," he said.

"We're denying him access to bank notes, access to bank accounts, making sure he is held accountable for what is taking place in Libya and also denied the means to persecute his own people."

Organizations and individuals with links to the Gaddafi family and regime have increasingly been put in the spotlight as the international community condemns Gaddafi's brutal use of force against protesters.

The head of the London School of Economics, Sir Howard Davies, stepped down after revelations that the school accepted multi-million dollar donations from Saif Gaddafi, who had been a student there.