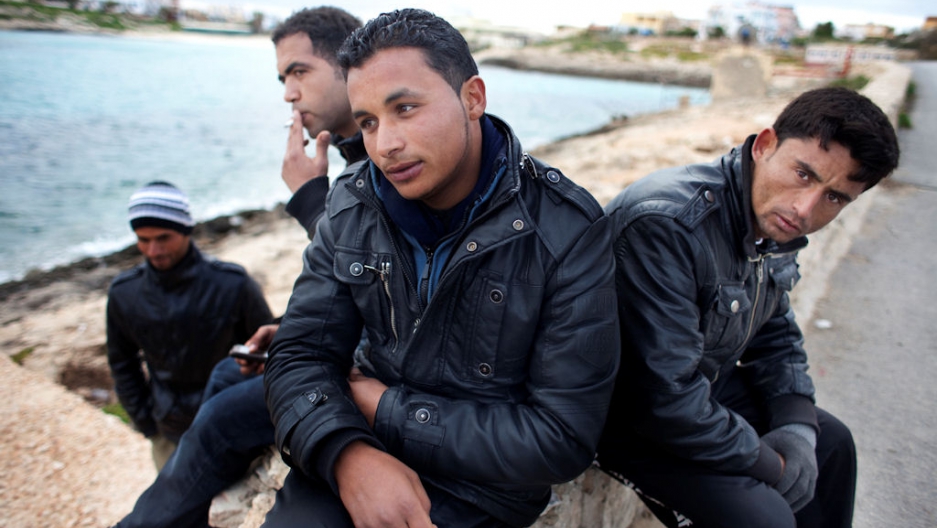 Four Tunisian men wait by the shore of Lampedusa Island, in Italy, for friends they expected a day earlier. Later, they learned that the boat had turned back when the sea became too dangerous to navigate. Some experts say that as many as one-third of immigrants crossing to Europe drown en route.
Credit: Jodi Hilton
Share

LAMPEDUSA, Italy — Over 10 days in February, the island of Lampedusa saw its biggest arrival of undocumented immigrants from nearby North Africa. Six thousand young Tunisian men and a handful of women, packed into fishing boats with as many as 200 aboard, made the perilous journey across 70 miles of open ocean to the southernmost Italian outpost. Carrying dreams of jobs in Europe and not much else, they arrived, wet and tired, on a rocky island of secret coves and crystal waters.

The overwhelmed Italian authorities quickly reopened a transit center, packing migrants into prefabricated dorm rooms in a facility built for 850. With nothing to do but wait for transfers to other facilities on the mainland, the migrants walked the streets of Lampedusa’s only town, passing time playing soccer and drinking coffee at the cafes on Via Roma.

Nissar, 23, said that in Tunisia he worked in a hotel bar. “In my home, I am king, but here, I’m a strange man. I don’t have money. I don’t talk the language. I came here to search for a good job, but I want to go back to my country.”

The trip across was terrible, he said. “I see the dead, three or four times.”

Indeed, the Tunisians and the Italians of Lampedusa have discovered that they share an appreciation for strong coffee.

At Cafe Bar Roma, owner Daniele Vitale is using more than six pounds of coffee a day, triple that of a regular off-season. Young Tunisian men occupy most of the tables throughout the morning, and again in the afternoon. While Vitale believes in serving all his customers, many young Tunisians don’t have the 80 euro cents for an espresso. Though many arrived with Tunisian cash, they are barred from exchanging it without personal documents.

So “we decided we would revive an old Neapolitan tradition,” Vitale said. Customers who have something to celebrate or are feeling festive can pay for an extra coffee, called a caffe sospeso, to be left "hanging" for someone who can’t afford it. He keeps a handmade chart next to his espresso machine to keep track, crossing off those he gives away. By earlier this week, he had given away more than 30 cups of coffee.

“When one of the [Tunisians] comes in and asks the price of coffee, and then disappointed, turns to leave, I call him back and say wait, it’s on the house,” Vitale said.

The immigrants don’t necessarily know about the initiative, “they simply see they are being offered a coffee and offer thanks in a very polite way, happily saying, grazie, grazie!”

Vitale says his brother Gianfranco came up with the idea for the coffee donations. He and his partner Annalisa D’Ancona are local activists who promote festivals and curate The Museum of the Immigrants, located in a two-room apartment in town. Inside the museum, mismatched shoes hang from the ceiling: a striped flip-flop and a sneaker without its match. Since 2008 Vitale and D’Ancona have been collecting such items from inside discarded boats or after they wash up on Lampedusa’s beaches. They’ve found letters sewn into small packages or inside a pair of pants, documents, phone books, email addresses and cooking utensils.

“The photos move me most of all. In this one you see the mother holding a baby in her arms,” said D’Ancona, pointing to an image of a woman wearing a red sari.

“Lampedusa has always been a place of passage,” she added, “a place of hospitality and rest for those who travel between the two continents.”

Though Lampedusa’s 5,000 year-round residents have received immigrants from Africa and Asia for decades, the scale of this wave has put islanders on edge. At a recent community meeting, residents voiced concern about the damage to the tourist industry, the island’s main source of revenue, and about the security of their homes and families.

Retired police general Antonio Pappalardo, raising his voice and slicing air with his hand, demanded that the government come to the aid of the Lampedusans as they confront this “invasion.” Giuseppe Costa, vice president of the newly formed Lampedusa Citizens Committee explained, “Every day we wake up in fear that something could happen and that we are headed for a crisis that could reduce all our families to poverty.”

Though stormy weather and rough seas kept arrivals to a minimum in recent days, almost 350 more Tunisians arrived Tuesday and more are expected over the next few days. Most days a few hundred are transferred by plane and ship to other centers on the mainland, where they will be processed according to European Union regulations on migration.

Gianfranco Vitale, for one, says "we will miss them." The Tunisians, he said, livened up the cafe.

While many Lampedusans are bracing themselves for the arrival of another wave of immigrants, Danielle Vitale says he will keep collecting extra coffees.

"Today," he explained, "basically everyone has a plate of food to eat. A coffee is like feeling a little more equal to the rest of the world."