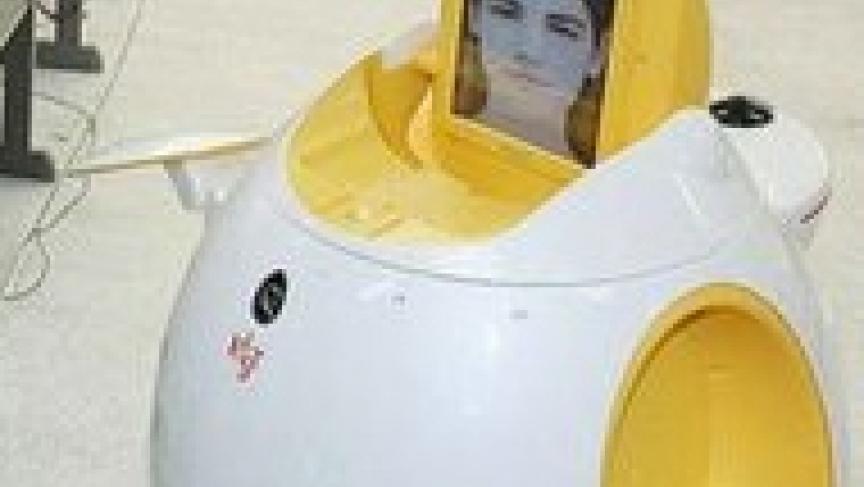 Share
By Jason Strother Education is highly prized in South Korea. Most grade schoolers study English, taught by native speakers flown in from around the globe. But at one school in South Korea, students have been studying with the help of a teacher who didn't come from abroad. In fact, she was completely assembled in Korea. Meet Engkey, the Hagjeong Primary School's newest English teacher. She's about 3-feet tall and shaped kind of like a penguin. She's a robot. Engkey wheels around the front of the classroom and stops in front of each of the six 4th graders taking part in this educational pilot program. She asks them to repeat English phrases and leads them in song. Engkey is not entirely a robot. She's hooked up via teleconference to the Philippines, where an English teacher conducts the class through a video monitor. It's a kind of outsourcing. When Engkey speaks, students hear the instructor's voice, and they see a Caucasian face that appears on Engkey's retractable LCD panel head. More than a screen on wheels But Engkey's creators say this robot is much more than just a video screen on wheels. Kim Mun-sang, director of the Intelligent Robotics Program at the publicly funded Korea Institute for Science and Technology in Seoul, said Engkey is more like an avatar. "We can detect the motion of the English teacher. As soon as the teacher moves his or her hand, the robot raises its hand. If the teacher laughs, we can detect a laughing expression. So the robot can do just what the English teacher does," Kim said. Engkey also has an autonomous mode, said Kim. The robot is programmed to help students with their English pronunciation, and it plays a little tune when they get a word right. Saving money Learning English is all about repetition and that makes a robot an ideal teacher, according to Jang Byoung-ok, the principal at the Hagjeong School. He added there's another reason to choose robots over foreign teachers. They're cheaper. Jang said it costs around $40 thousand a year to support a foreign English teacher in Korea; it's about half the price to build an Engkey and contract with a teacher in the Philippines. But there are better ways for the government to save money and improve education here, according to Yu Do Hyun, who lectures in English education and pedagogy at Seoul's Kookmin University. "We need Korean teachers for beginners and intermediates," Yu said, adding that Korean teachers know how to teach English to Korean students. English teaching robots would also deprive students of the most basic reason to learn a foreign language, human interaction, Yu said. "Communication is between humans, so they need practice with native, human teachers. Even though they may practice English with the robots, when they meet human native speakers, they will be very nervous, because they haven't conversed with real speakers." Engkey's creator, Kim Mun-sang, said he'd like to see all Korean schools use robots one day, but isn't so sure they could ever completely replace human teachers. In the end, Kim said, it's the students who will determine whether robots can be successful substitute teachers. At the Hagjeong School, Engkey receives high marks from the students. One 10-year-old boy who goes by the English name is Tony said he was a little nervous about the robot at first, but he liked its singing and dancing. His classmate, 10-year-old Charlotte, said, "I like the robot teacher better than human teachers."