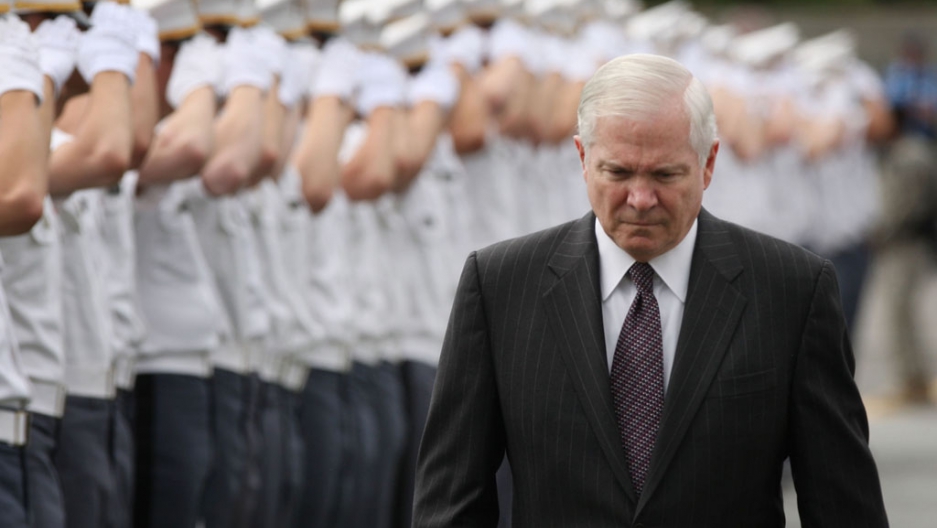 BOSTON — Defense Secretary Robert Gates’ heartfelt speech to the cadets at West Point last Friday was a stunning rebuke to his predecessor, Donald Rumsfeld, and of his former boss, ex-President George W. Bush’s, war-making. It was also a warning to his current boss, U.S. President Barack Obama. His message: avoid military engagements such as Iraq and Afghanistan.

On Wednesday Gates warned Congress that even a no-fly zone over Libya would mean “a big operation in a big country.”

Gates, alone among Obama’s first team, served the Bush administration as well. That gives him a unique perspective on this century’s wars. And he doesn’t like them.

What leapt from the pages of Gates’ West Point speech was his admonition, quoting Douglas MacArthur, that any future defense secretary “who advises the president to again send a big American land army into Asia or into the Middle East or Africa should have his head examined …”

His criticism of the Afghan adventure was more specific. The U.S. army should not “turn into a Victorian nation-building constabulary — designed to chase guerrillas, build schools or sip tea.” Gates might never admit it, but this was a rebuke of Gen. David Petraeus’ counterinsurgency policy as well.

The speech came just as Donald Rumsfeld’s self-justifying memoir, "Known and Unknown," was hitting the book stores — Rumsfeld who so cavalierly under-estimated what it would take in Iraq. Perhaps humorist Calvin Trillian caught the essence of the Rumsfeld tome most succinctly:

“The book is fat,
The message thin.
Mistakes were made,
But not by him.”

Gates pointed out to the cadets that no one could predict the time and place of the next military confrontation. Since Vietnam, he said, “we have never once gotten it right, from Mayaguez to Grenada, Panama, the Balkans, Haiti, Iraq and more — we had no idea a year before any of these missions that we would be so engaged.”

But in one aspect he did agree with Rumsfeld, that the army should move away from preparing for “high-end conflicts — priorities often based, ironically, on what transpired in the last century — as opposed to the messy fights in Iraq and Afghanistan.” Rumsfeld tried, and largely, failed, to create a slimmer, more agile army.

“In addition to the essential troop command and staff assignments, you should look for opportunities that in the past were off the beaten path, if not career dead ends,” Gates said. “And the institutional army should not only tolerate, but encourage you in the effort. Such opportunities might include further study at grad school, teaching at this or another first-rate university, spending time at a think tank, being a congressional fellow, working for a different government agency or becoming a foreign area specialist.

“On that note, I would encourage you to become a master of other languages and cultures, a priority of mine since taking this post.”

Indeed, today’s army officers are studying foreign languages as if they were going into the diplomatic service rather than the military. And a graduate degree, once highly unusual in Vietnam days, is now not out of the ordinary. Consider that Gen. David Petraeus went on to Princeton.

Gates said the greatest challenge facing the army today, and his “main worry,” was “how can the Army break up the institutional concrete, its bureaucratic rigidity in its assignments and promotion processes ...?" Too many good officers were opting out of the army after five or 10 years.

Rear-echelon tours of duty were where too many mid-level officers are “warehoused,” he said. “Men and women in the prime of their professional lives, who may have been responsible for the lives of scores or hundreds of troops, or millions of dollars in assistance, or engaging in reconciling warring tribes, they may find themselves in a cube all day reformatting power point slides, preparing quarterly training briefs, or assigned an ever expanding array of clerical duties. The consequences of this terrify me,” he said.

Gates spoke about loosening up the traditional paths to promotion, but he might have said that something needs to be done about the promotion of women in the armed forces, especially the Army and Marine Corps. If women are to be denied direct combat experience — traditionally the ticket that needs punching for advancement — then they have got to be allowed to move forward and upward without having to undergo combat.

To his great credit, Gates has recognized that George W. Bush’s getting the United States into two wars, in reaction to 9/11, should not be repeated. I would go a step further and call this country’s response to 9/11 the greatest over-reaction in history. Getting mired down in two wars has damaged this country’s strength and ability to lead. There has to be a better way to combat terrorism than invading Muslim countries. Gates has also recognized that the militarization of our foreign policy needs to be redressed.

Gates is expected to step down later this year. His counsel will be sorely missed.