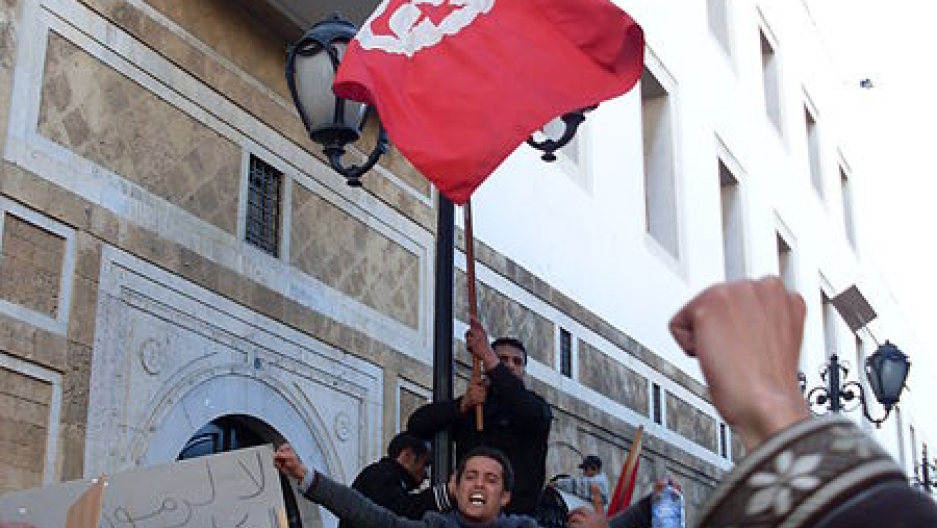 Share
by Megan Williams It's been several weeks now since dictator Ben Ali fled Tunisia after the popular uprising that started the wave of unrest that has swept the Middle East. Tunisia set up an interim government to transition into democracy. Its members were drawn both the opposition and from the former regime. But it's a fragile one. And for the thousands of Tunisians who continue to protest, the revolution seems far from over. "The dictatorship is still here," said 33-year-old blogger Omar Bouissi. "True the head of the dictatorship has gone. But the dictatorship with the police, mass media and all the system" is still in place, he explains. Bouissi stands under a large tent at the entrance to the Kasba in Tunis. Normally it's a quiet city square, lined with pruned trees and benches near the Tunis' medieval district. But in the past ten days it's become the hub of a round-the-clock sit-in, with hundreds of Tunisians from across the country sleeping in tents in front of the Prime Minister's office, endlessly discussing politics. Bouissi and others here say not enough has changed since the revolution that ousted dictator Ben Ali on January 15. They want the current caretaker government, which has members of the old regime in it, dissolved. And they want a new constitution now. "I demand a transition government, without the filthy remains of the old regime," said protester Sami Gritli. Like those camped out in tents and under plastic sheeting, in cold drizzly weather, Gritli wants political change faster. The former interim Prime Minister Mohammed Ghannouch, who belonged to the Ben Ali regime, resigned after clashes with protesters on the main street here left five dead. Resignation not enough But Gritli said the resignation isn't enough to reassure him that democracy is being achieved. "We feel that the ex-members of the regime are still here. By 'here' I mean in every institution: schools, universities, hospitals. They are there because they want to come back stronger in a couple of months." Nearby in a low tent, four men sit in a row, propped up on mattresses, their legs covered by layers of blankets and candles glowing around them. They clasp pictures of young people killed by police during protests in January. Six days ago, they began a hunger strike. "We want to cut all ties with the old regime," said Lahlar Jeleli, a 55-year-old father of six who said he won't eat until the current interim government goes. "We want a new constitution, not the one from 1952. And we want an end to this government. We want a fresh start." As the protesters continue their peaceful sit in, the provisional government is collapsing. Nageeb Chebbi, leader of the Progressive Democratic Party, one of Tunisia's 40 political parties, is one of the latest government members to resign. "I respect the right of to sit in, in front of the kasba, but with the condition that they let the government work," said Chebbi. He adds that the freedom to sit in stops where the freedom to work for the ministers begins. Lack of trust But Chebbi admits that he himself doesn't trust the current transitional government, where, he said, decisions are made without inclusive discussion. Chebbi warns Tunisia is in a state of insecurity, with social unrest, a weak transitional government and weak political parties. He said he fears a power void will develop, one that could be quickly be filled by the military, creating a situation similar to that of Egypt. A military presence in politics is something that neither Chebbi nor most Tunisians, who pride themselves on being a model for the region, want. But given the fragility of the interim government, and mounting pressure for quick change, it's also a growing possibility.