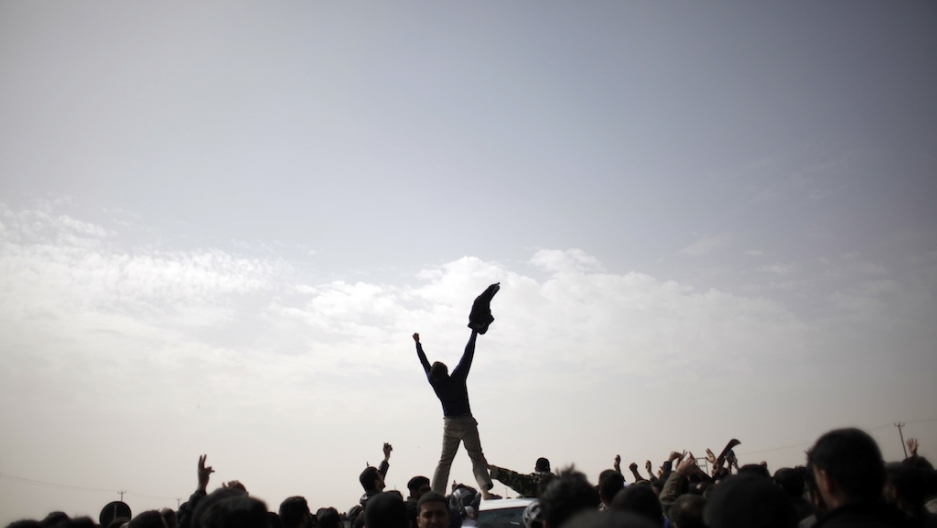 Libyan rebels in Ajdabiya celebrate reports that a counterattack by Muammar Gaddafi's forces in Brega had failed on March 2, 2011.
Credit: Marco Longari
Share

Rebels thwarted Muammar Gaddafi's first major counteroffensive in eastern Libya as they managed to retain control over Brega, a strategic oil port 460 miles east of Tripoli, according to reports.

The battle for Brega, which has been held by opposition forces since last week, began when several hundred pro-Gaddafi troops arrived in the city on about 50 trucks and SUVs mounted with machine guns, AP reports. The pro-government forces initially seized control of the oil facilities, port and airstrip. However, by day's end, with the help of citizen militias from nearby citiies, the opposition regained control.

"By afternoon, they had lost it all and had retreated to a university campus 5 miles (7 kilometers) away. There, opposition fighters besieged them, clambering from the beach up a hill to the campus as mortars and heavy machine gun fire blasted around them," AP reported. "They took cover behind grassy dunes, firing back with assault rifles, machine guns and grenade launchers. At one point, a warplane struck in the dunes to try to disperse them, but it caused no casualties and the siege continued."

Dozens of men gathered in a square near the university celebrating and flashing victory signs after the battle ended. Moments later, a government fighter jet launchd two missiles at them, but it caused no casualties, Al Jazeera reports.

The battle left at least 18 rebels dead and 18 wounded.

Gaddafi offered an amnesty Wednesday for rebels who handed back their weapons, promising "forgiveness" at the same time as his forces advanced on rebel-held positions, reportedly pounding opposition fighters with aerial bombing raids.

In a three-hour long speech in Tripoli, Gaddafi warned that his country would be turned into "another Vietnam" if foreign countries intervened, the Guardian reported.

"We will enter a bloody war and thousands and thousands of Libyans will die if the United States enters or NATO enters," he said.

The Libyan leader, speaking at a televised public rally in the capital, also said that he was not a president and so could not resign his position as power was in the hands of the people.

Gaddafi, who has sought to reassert his authority amid mounting calls for international military intervention, also offered a handful of concessions aimed at those supporting the opposition forces who control more than half the country.

Meanwhile, the USS Ponce and the USS Kearsarge, amphibious assault ships that typically carry Marines, cleared the Suez Canal from the Red Sea and entered the Mediterranean closer to Libyan shores on orders from Defense Secretary Robert Gates, an official told Reuters.

And a massive airlift of Egyptian refugees began Wednesday from the Libyan-Tunisian border to Cairo and Verona, Italy, involving British, French and Tunisian planes.

The three countries were answering an urgent request from the United Nations to help 85,000 refugees stranded in camps in Tunisia and so prevent a humanitarian disaster, according to the BBC.

There were also reports of warplane attacks on Ajdabiyah, another rebel town in the east. Witnesses said Gaddafi’s men had seized a nearby oil facility and were advancing on the town, 470 miles east of Tripoli.

"I see two jets bombing now," one witness told The Associated Press. Another said the rebels were readying in the western side of Ajdabiyah to take on the pro-Gaddafi force. "We are ready to repel their attack," the witness said.

Overnight clashes between rebels and government troops are said to have left at least 14 people dead.

The attacks, which were initially denied by a Libyan government spokesman, are said to be the most significant retaliation by pro-Gaddafi forces since the popular uprising began on Feb. 17.

As Western powers wrestled over what action to take on Libya, the United States dispatched two warships to the Mediterranean. Egyptian officials told the Washington Post that the amphibious assault ships USS Kearsarge and USS Ponce had entered the Suez Canal.

The Libyan capital Tripoli, still firmly in Gaddafi’s hands, was on heightened alert following a major explosion. Reports put the blasts down to an oil tanker falling on its side, but it was not clear whether the incident was an act of sabotage.

Gaddafi's forces earlier retook at least two towns close to Tripoli and threatened a third, according to the Associated Press. One of those retaken was the strategic mountain town of Gharyan, which overlooks the capital.

Pro-government forces also have said they were in control of the city of Sabratha, west of Tripoli, while the rebels said they had repulsed attacks on three other key areas — Misrata to the east, Zawiya to the west and the mountain town of Zintan to the south of the capital.

U.S. Secretary of State Hillary Rodham Clinton, meantime, warned that Libya was at risk of collapsing into a "protracted civil war" amid increasingly violent clashes between the two sides.

Her comments came as the administration of U.S. President Barack Obama ruled out the immediate imposition of a NATO-enforced no-fly zone over Libya. British Prime Minister David Cameron has also rolled back earlier demands on enforcing an aerial blockade.

Clinton told the House of Representatives Foreign Affairs Committee that military intervention by the United States and other countries could do more harm than good, even as the country stood on the brink of chaos.

She said the administration was aware that the Libyan opposition wanted to be seen "as doing this by themselves on behalf of the Libyan people — that there not be outside intervention by any external force. We respect that."

"Muammar Gaddafi is not a president to resign, he does not even have a parliament to dissolve," Gaddafi said on Wednesday in his third public appearance since the uprising, Al Jazeera reported.

In an televised address from a ceremony to mark 34 years of "people power," he said that the world did not understand the Libyan system that put power in the hands of the people.

"The people are free to choose the authority they see fit," he said.

"We put our fingers in the eyes of those who doubt that Libya is ruled by anyone other than its people," he said, referring to his system of "direct democracy" which he outlined in his Green Book political manifesto, launched in 1977.

"I have always said that the Libyan people are free [in managing their own business]."

Libyan opposition groups were debating whether to request Western airstrikes against Gaddafi's compound and assets as their nascent uprising faced retaliation from regrouped pro-government forces, reported the New York Times.

The revolutionary council in Benghazi, the second largest city in Libya and the heart of the uprising, is debating whether to ask for the airstrikes, which would be under the banner of the United Nations in the hopes that they would not be seen as foreign intervention.

“If it is with the United Nations, it is not a foreign intervention," the council’s spokesman, Abdel-Hafidh Ghoga, told the Times.

Meanwhile, the U.N. General Assembly voted Tuesday to unanimously suspend Libya from the U.N. Human Rights Council as a result of the attacks by Gaddafi's forces on civilians.

Libya was suspended after committing "gross and systematic violations of human rights," according to the U.N. statement. The north African country will be prevented from participating in the council's activities until the General Assembly decides otherwise.

In a speech to the U.N. before the vote, Secretary Gen. Ban Ki-moon said Gaddafi's forces had killed more than 1,000 people, and there were reports of extrajudicial killings, arbitrary arrests and torture.

"The world has spoken with one voice: we demand an immediate end to the violence against civilians and full respect for their fundamental human rights, including those of peaceful assembly and free speech," he said.

The U.N. also called for a mass humanitarian evacuation of people fleeing Libya for Tunisia as the border situation has reached a "crisis point." The total number of people fleeing violence and chaos in Libya has topped 140,000, with about half of them entering Tunisia, according to reports.