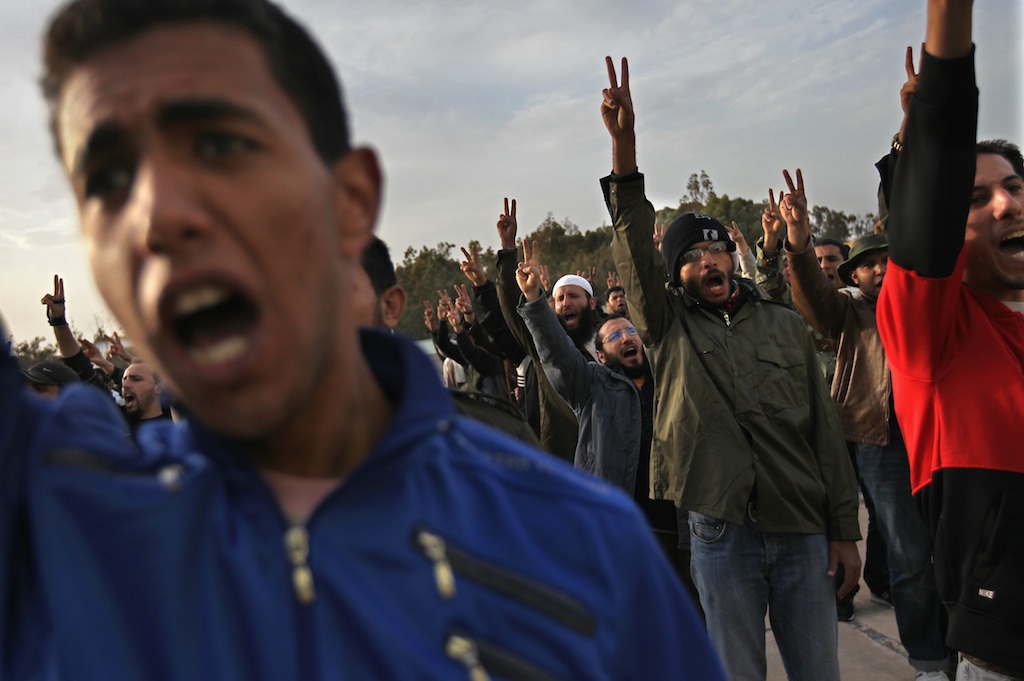 In a desperate attempt to force out Muammar Gaddafi, a Libyan opposition group is considering requesting Western airstrikes against the leader's compound and assets, reports the New York Times.

The revolutionary council in Benghazi, the second largest city in Libya and the heart of the uprising, is debating whether to ask for the airstrikes, which would be under the banner of the United Nations in the hopes that they would not be seen as foreign intervention.

“If it is with the United Nations, it is not a foreign intervention," the council’s spokesman, Abdel-Hafidh Ghoga, told the New York Times.

There is concern that the plan could backfire as Gaddafi would likely blame foreign powers, and the Libyan people themselves might not support airstrikes from the West. There is also no indication that the United Nations Security Council would agree to the airstrikes.

Meanwhile, the United Nations general assembly voted Tuesday to unanimously suspend Libya from the U.N. Human Rights Council as a result of the attacks by Gaddafi's forces on civilians.

Libya was suspended after committing "gross and systematic violations of human rights," according to the U.N. statement.

The north African country facing weeks of a nationwide uprising will be prevented from participating in the council's activities until the general assembly decides otherwise.

In a speech to the United Nations before the vote, Secretary General Ban Ki-moon said Gaddafi's forces had killed more than 1,000 people, and there were reports of extrajudicial killings, arbitrary arrests and torture.

"The world has spoken with one voice: we demand an immediate end to the violence against civilians and full respect for their fundamental human rights, including those of peaceful assembly and free speech," he said.

The United Nations also called for a mass humanitarian evacuation of people fleeing Libya for Tunisia as the border situation has reached a "crisis point."

The number of people fleeing violence and chaos in Libya has topped 140,000, with about half of them entering Tunisia, according to reports.

Aid workers warned on Tuesday that the situation at the border with Tunisia has reached a crisis point, as border guards were firing into the air, trying to control crowds pressing to get through the Ras Jdir crossing, Al Jazeera reported.

"They've been accommodating people in shelters, schools and places of their own. But we're now aware of the fact that they're very much stretched and they need the support of the international community," said Liz Eyster of UNHCR, the United Nations' refugee agency.

The U.N. estimates that about 100,000 people have fled the violence in the past week.

Libyan rebels have repelled an attack by forces loyal to Muammar Gaddafi aimed at retaking the city of Zawiya, close to the capital, Tripoli, according to reports.

But Gaddafi's forces have retaken at least two towns and threatened a third, according to Associated Press.

One of those retaken was the strategic mountain town of Gharyan, the largest in the Nafusa Mountains, which overlooks Tripoli, a resident said, speaking on condition of anonymity for fear of government retaliation.

The town fell after dark Friday in a surprise attack, and the government troops detained officers who defected to the rebels and drew up lists of wanted protesters and started searching for them, the resident added.

Gadhafi supporters also have said they were in control of the city of Sabratha, west of Tripoli, which gone back and forth between the two camps in the past week.

The rebels repulsed attacks on three other key areas — Misrata to the east, Zawiya to the west, and the mountain town of Zintan to the south of the capital.

Witnesses in Zawiya, 30 miles west of the capital, said rebels shouted "Allahu akbar (God is great) for our victory," and carried an air force colonel who had just defected after six hours of overnight gunbattles failed to dislodge anti-Gadhafi forces who control the city.

US Secretary of State Hillary Rodham Clinton, meantime, warned that Libya was at risk of collapsing into a "protracted civil war" amid increasingly violent clashes between the two sides.

And there were reports that more than 140,000 people had fled Libya to Egypt and Tunisia in a growing exodus from the chaos engulfing the country.

Rebels in Zawiya, the nearest population center to Tripoli to fall into the opposition hands, now include army forces who defected from the government long with their tanks, machine guns and anti-aircraft guns. Overnight Monday they fought pro-Gaddafi troops attacking from six directions and using the same weapons, Al Jazeera reported.

One resident reportedly told the Associated Press by telephone late Monday that fighting started in the evening and intensified after dusk when troops loyal to Gaddafi attacked the city.

"We were able to repulse the attack. We damaged a tank with an RPG. The mercenaries fled after that," said the resident.

Residents celebrated with a victory march in the city center Tuesday, chanting "Allahu Akbar [God is Great] for our victory," but troops loyal to the longtime leader clamped down on a strategic mountain town as they fought to reclaim areas near Tripoli, residents told the AP.

Zawiya is a town of 200,000 close to an oil port and refineries. Police stations and government offices inside the city have reportedly been torched and anti-Gaddafi graffiti was everywhere.

Gaddafi has launched by far the bloodiest crackdown in a wave of anti-regime uprisings that continue to sweep the Arab world.

Meanwhile, a senior U.S. diplomat has called Muammar Gaddafi “delusional” and "unfit to lead” as the Libyan leader responded to international pressure to step down with bombing raids and escalating military action against anti-government rebels.

U.S. ambassador to the United Nations, Susan Rice, spoke in response to a Gaddafi interview with foreign journalists in which he dismissed claims of deadly attacks, claiming “all my people are with me, they love me all. They will die to protect me, my people.”

Rice said he “sounds, just frankly, delusional,” and his ability to laugh off questions from journalists “while he is slaughtering his own people, it only underscores how unfit he is to lead and how disconnected he is from reality.”

Gaddafi's troops attacked an oil refinery in central Libya and cities on either side of the country on Monday, and his warplanes bombed a weapons depot in the east.

The two Libyan Air Force MiG-23s took off from an air base near Surt, 200 miles east of Tripoli, and hit three targets before being repelled by rebel anti-aircraft fire, reports the New York Times. They then attacked locations in Ar-Rajah, south of Benghazi, an opposition-controlled city in the east.

Gaddafi's escalation of force, which risked bringing the country closer to a state of civil war, comes as the international community increases its support for Libyan opposition forces and pushes Gaddafi to relinquish his four-decade grip on power.

The United States and Europe have frozen billions of dollars in Libya's foreign assets, the European Union has imposed an arms embargo among other sanctions and France said it would fly aid to the opposition-controlled eastern half of the country.

The U.S. prepares to help

Discussions on a range of possible military options began last week between British and U.S. officials at the Pentagon, according to the Guardian. Officials told the paper that the support of U.S. and British armed forces might be required to protect corridors for humanitarian relief into Libya through Tunisia and Egypt.

Western officials told the paper that any military intervention in the unfolding conflict would require the approval of the Security Council. Russia and China, who both hold a veto, have voiced their opposition to any outside interference.

Officials from the Obama administration and European allies have been discussing the possibility of enforcing a no-fly zone over Libya in an effort to halt Gaddafi's attacks on civilians. Hundreds if not thousands of civilians have been killed by Gaddafi's forces and pro-government mercenaries since the uprising began in mid February.

"We do not in any way rule out the use of military assets. We must not tolerate this regime using military forces against its own people," Cameron said.

When asked if the West might supply Libyan opposition forces with weapons, Cameron replied: "It's certainly something we should be considering."

Clinton told Congress in Washington on Tuesday that, "In the years ahead, Libya could become a peaceful democracy, or it could face protracted civil war. The stakes are high."

On Monday, she said that "no option was off the table," including the possibility of Gaddafi seeking refuge in a safe haven, such as in Zimbabwe.

"I was almost rendered speechless by the idea of him and Mugabe together," Clinton reportedly told a news conference in Geneva, but that the goal is for an end to the violence, "and if the violence could be ended by his leaving ... that might be a good thing."

"We have joined the Libyan people in demanding that qaddafi must go - now -- without further violence or delay," Clinton said Tuesday in testimony before the House Committee on Foreign Affairs, according to CBS. "We are taking no options off the table so long as the Libyan government continues to turn its guns on the Libyan people."

No repeat of Gulf War

On Tuesday, Cameron insisted the Libyan people must not be left to their fate, as Shiites in the south of Iraq were when their rebellion against Saddam Hussein in the wake of the 1991 Gulf War was brutally quashed.

"I think there are some very immediate dangers of what Colonel Gaddafi could do to his own people and we should be planning now to think what we can do to try to stop that," Cameron said Tuesday, according to the Telegraph.

London's Telegraph reports that the West is considering using force against Gaddafi's regime out of fear that the defiant and often unstable leader has access to chemical weapons that could be used against civilians. The Telegraph quoted an unnamed senior British government source who accuses Libya of still having stocks of mustard gas chemicals.

"Despite a promise in 2003 to give up weapons of mass destruction, Gaddafi is thought to have retained as much as 14 tons of the chemicals required to create mustard gas. The stocks are said to be stored in secret secure facilities in the Libyan desert. The chemicals would need to be mixed and loaded into shells before they could be used as weapons, but are 'still a concern,'" said a senior British government source. 'We want to make sure they’re destroyed,'" reports the Telegraph.