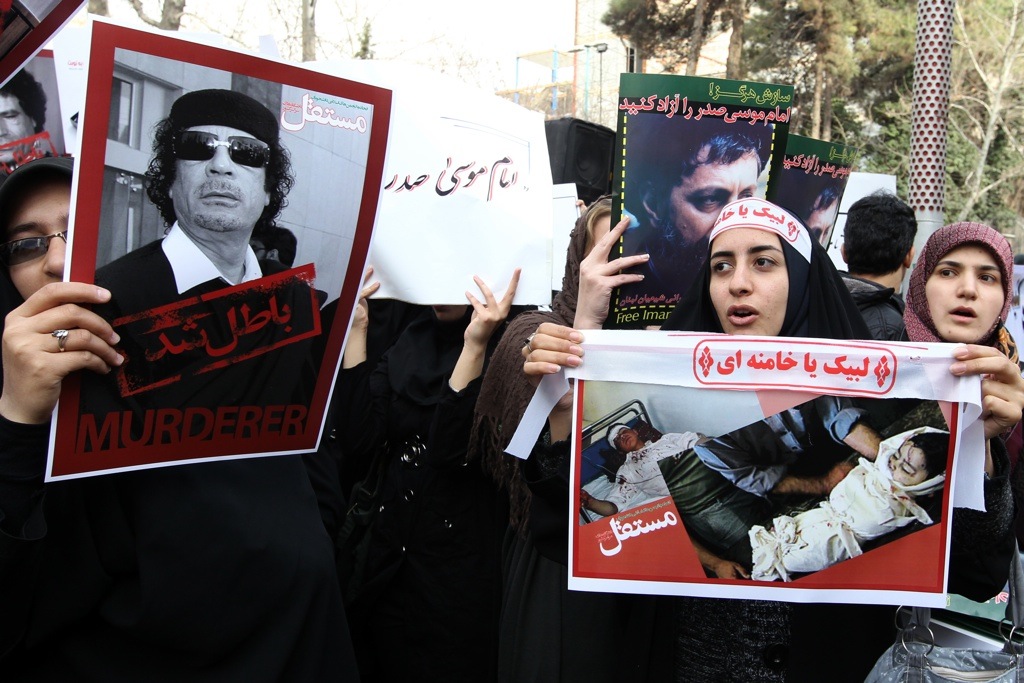 Iranian protesters shout slogans against Libyan leader Muammar Gaddafi and denouncing his deadly crackdown in Libya during a demonstration in front of the United Nations offices in Tehran on February 24, 2011. Iranian President Mahmoud Ahmadinejad's government on March 1 clashed with demonstrators who were protesting the arrests of Iranian opposition leaders Mir Hossein Mousavi and Mehdi Karoubi.
Credit: Atta Kenare
Share

BOSTON — Iran's security forces fired teargas and clashed with opposition supporters in Tehran on Tuesday, where demonstrators were rallying to demand the release of two opposition leaders, according to reports from Iran.

"Security forces and people in civilian clothes clashed with demonstrators in Tehran to disperse them," opposition website Kaleme reported.

The protest follow the news that Iran's top opposition leaders Mehdi Karoubi and Mir Hossein Mousavi and their wives are being held by President Mahmoud Ahmadinejad's government, according to the New York-based International Campaign for Human Rights in Iran.

The two opposition leaders had been under house arrest since Feb. 14, after they called for new rounds of protests in solidarity with the Egyptian people.

Tehran prosecutor Gholam Hussein Mohseni Ejehi confirmed Monday that the leaders' contact with the outside world has been cut off, but he didn’t say where they were being held. Opposition websites report that they were all taken to Heshmatiyeh prison in Tehran. Friends and families of the leaders have not been able to communicate with them for two weeks.

A number of influential figures have spoken out against the house arrest. Ayatollah Dastghayb, from southern city of Shiraz, Ahmad Montazeri, son of the late grand Ayatollah Ali Montazeri, Ayatollah Sanei, and former president Mohammad Khatami have all denounced the action and called for the release of the opposition leaders.

Karoubi's children have also been under pressure from the security forces. Security forces broke into the home of Hossein Karoubi, one of Mehdi Karoubi's three children, in order to arrest him, but he was not there at the time, according to opposition news websites. Hossein Karoubi has been on the run since, having only called his family once to confirm that he is alive and safe.

While Mousavi and his wife were under house arrest, his daughters had tried to get in touch with their parents but were blocked by security forces, who had blocked the entrance to the street and erected an iron gate. The two daughters published an open letter on the opposition news site Rahe Sabz. Part of the letter reads:

“Masked men refused to let us pass. We are just children worried about their parents, we didn’t want to talk politics. But they did.

“For a year you challenged the regime, now it’s our turn to deal with you,” they had said. “We killed them [referring to opposition demonstrators killed during the election aftermath], and they deserved it, because they were not human.”

Commenting on the arrest of the opposition leaders, Mohammad Tahavori, a prominent Iranian journalist based in Boston, said: "The order to transfer the leaders to a secret location can only have come from the Supreme Leader himself. When it became clear that after one year the opposition was not dead and that it could get people to march in the streets by issuing a single statement, the Supreme Leader and his advisers realized this can lead to disastrous consequences, and so they decided it was time to deal with the leaders."

Mehdi Karoubi and his wife Fatemeh Karoubi, were also subject to verbal and physical harassment over the past week, according to reports. Neighbors told opposition websites that an acoustic bomb was thrown inside their house. Later a mob gathered outside their house and shouted they were “waiting for orders from the Supreme Leader to behead them, and take their bodies around town for everyone to see.”

Ultra conservative figures have constantly called for the opposition leaders to be arrested and executed.

“Given the lynch mob-like calls for their execution by numerous Iranian politicians and clerics, there is reason to be deeply concerned for their safety and well being,” said Aaron Rhodes, spokesperson for the International Campaign for Human Rights in Iran in the statement published on the campaign's website.

A video published on the internet on Saturday shows a group of plainclothes police surrounding the daughter of Hashemi Rafsanjani, head of the Guardian Council and former president, and verbally abusing her. She had spoken out against the results of the 2009 election and participated in some of the anti-government demonstrations.

Meanwhile Iran's opposition has called for new rounds of protests, the first one to be held on Tuesday. Speakers for the opposition leaders have called for the protest to continue today and every Tuesday until the leaders are released and their demands are met.

"I have been talking to many people in Tehran," said Iranian journalist Tahavori, "and they are very angry about the situation."

Tahavori adds that events depend on whether "protesters will be able to gather in groups, something that they were unable to do the last time."

The government, according to Tahavori, will not release the opposition leaders any time soon unless it is challenged by their supporters.

"Figures such as former President Mohammad Khatami, who still has power to negotiate with the Supreme Leader, could also step in and negotiate," Tahavori said, "but it is not clear if he is willing to do it."