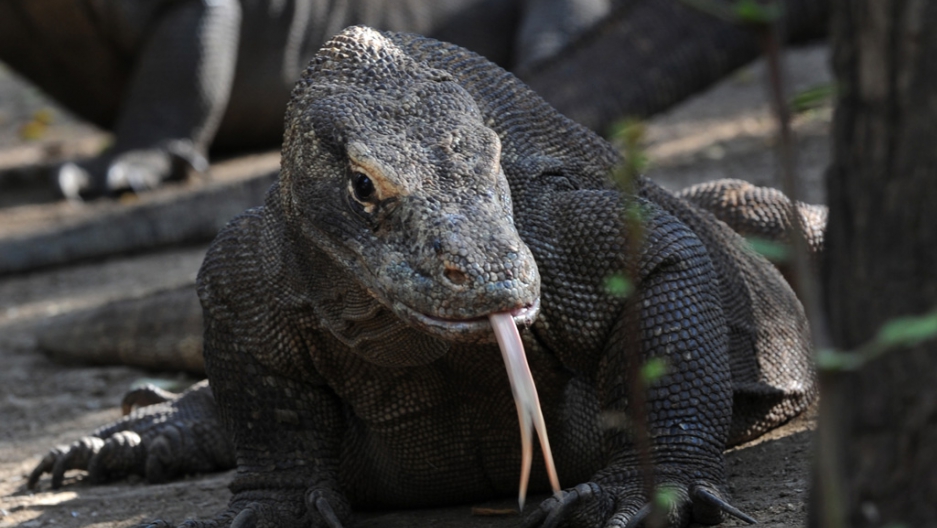 KOMODO ISLAND, Indonesia — “Keep your distance, keep silent and secure all your belongings,” whispered Ande Kefi, a ranger at Komodo National Park, a collection of three small islands in eastern Indonesia that are home to the world’s largest lizard, the Komodo dragon.

Wielding a long, two-pronged wooden stick, Kefi and the other rangers went in search of a creature distinguished by its rarity — only around 2,500 exist in the wild — and prehistoric appearance. Kefi said the sticks serve as their “guns,” used to prod the lizards in sensitive spots should they come within striking distance.

He gives the same instructions each time he leads visitors on a trek around Komodo and neighboring Rinca island, where dusty brown hills are capped with the star-like bursts of palm trees. Visitors say the scrub brush savannah and rough tropical grassland reminds them of Jurassic Park. Indeed, the park named for the ancient creature (Komodo means dragon in Indonesian) is the only place in the world where people can see today’s modern dinosaurs in the wild.

Now, the Indonesian government is working to exploit that uniqueness through a reinvigorated tourism campaign aimed at showcasing the country’s many wonders. But many involved in the tourism industry here worry that the government, in its efforts to increase tourist dollars, are not balancing its promotions with much-needed infrastructure development — a potentially serious oversight in a country plagued by public transportation disasters and on an island where real life dragons roam freely.

Indonesia is a land of 17,000 islands rich in culture and biodiversity, but it is also plagued by extortion, pollution and paltry infrastructure. The promotions team at the Ministry of Tourism said it recognizes there are difficulties with visiting some of Indonesia’s more remote islands.

“We know still many areas are difficult to get to, and the people there don’t have good training and resources,” said Ratna Suranti, who handles the ministry’s electronic media. “So we need to promote the places that are truly ready.”

Komodo is at the top of the list, in part because it fits in with the ministry’s desire to sell eco-tourism. But also because it garnered international attention when the New 7 Wonders of Nature campaign, founded by eccentric explorer Bernard Weber, short-listed the park among its 28 finalists, which include the Amazon Basin, Vietnam’s Halong Bay, the Grand Canyon and the Galapagos Islands.

This correspondent visited Komodo along with the Ministry of Tourism, which is urging people to “Vote Komodo” in the hope that international recognition will draw more visitors to the island.

According to the ministry, 45,000 tourists visited Komodo National Park in 2010, and officials predict numbers could rise well above their target of 54,000 this year if Komodo wins the New Wonder designation next November.

The money made from island entrance fees will go toward conservation, while the purchase of Komodo dragon woodcarvings and other souvenirs made by island villagers (now numbering around 2,300) will provide income for local communities, Suranti said.

Park rangers are less optimistic. They worry that too many tourists could upset an already fragile ecosystem, and say the island still lacks the infrastructure to accommodate an influx of visitors.

“I just hope we can better prepare the government about how they will manage the island and travel here,” Kefi said, noting that local officials have made little effort to learn about the island and its needs.

Rangers with the Forestry and Wildlife Department work to protect the conservation area by monitoring the Komodo dragons through a partnership with the San Diego Zoo.

Each lizard has an identification tag that catalogues its weight and size, so rangers can determine how the population is faring. An increasing number of attacks on humans have occurred in recent years, Kefi said, who believes it might be because of competition for food.

Komodo dragons are fickle. They don’t like too much water or humidity. In October last year, rangers discovered a nest in which all but one of the 13 eggs had broken. Kefi is not sure of the cause — too much rain perhaps, or not enough incubation — and says rangers still know little about the creatures they’re tasked with protecting.

They do know the dragons are intelligent, and extremely dangerous. The lumbering lizards can grow up to 10 feet in length and weigh 200 pounds. They might look docile lounging by a water hole, but that is how they deceive their victims, said Suprayitno, who works with the park’s police to ensure people abide by regulations against littering, disturbing the lizards and bomb fishing, which destroys marine life in the cerulean seas around Komodo island.

The dragons can also smell prey as far as six miles away, and they sprint in short bursts when attacking. Their miniscule teeth can tear away flesh and grind up bone, but it’s the venom they emit that is deadly.

Rangers tell cautionary tales of tourists being eaten after separating from their group, or of villagers from nearby islands meeting the lizards without protection or knowledge of the dangers they pose. In 2007 one village boy disappeared without a trace.

Most of what the rangers know about the lizards comes from experience or trainings led by zoologists from San Diego and Australia. Sometimes the government holds workshops on park management, Kefi said, but it has done little to provide the services the forestry department needs to keep people safe.

The first aid kits on Komodo and Rinca have little more than bandages and antiseptic, but Komodo bites require antibiotics to prevent infection. The most rangers can do for an injury is wash it with alcohol until victims reach the hospital on the Indonesian island of Bali, an hour-long plane ride to the west.

Rangers tell local officials they’re short staffed and ill-equipped to handle the constant monitoring needed to protect the island and its lizards. Kefi calls the New 7 Wonders campaign a “project” only for the people in Jakarta because, since it began in 2008, the ministry has not bothered to provide any additional support to those working in the field.

When asked about the lack of resources, the deputy district head of the province said the government was “working on it.”