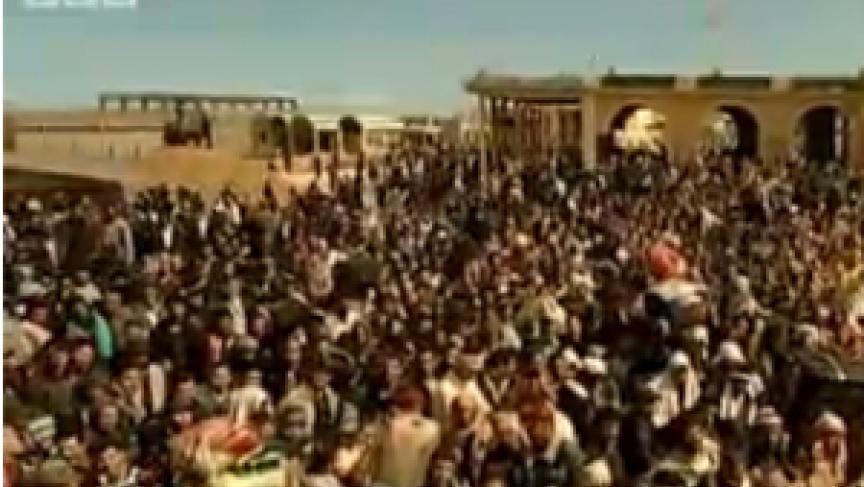 Share
The turmoil in the north African country of Libya figures in today's Geo Quiz: It's estimated that as many as 1.5 million foreign workers were in Libya's oil fields and construction industry when the violence erupted. Many are now fleeing the unrest, streaming into several different countries. We're looking for the names of some of those places. Geo Answer: For the answer we'll begin with Libya's neighbors, Tunisia and Egypt. The United Nations said today that more than 140,000 people have fled from western Libya into Egypt and Tunisia. In southern Tunisia, aid efforts are being coordinated at Djerba airport. Kallel Sofiene is the head of the Tunisian Red Crescent. He's overseeing what he says is a complex operation: "Actually the situation is a little bit difficult, because there are more and more nationalities coming to Tunisia. They are mostly Egyptians, but actually we have Chinese, for example there was a flight that took off just a few minutes ago with a big jumbo to China. There are some thousands of Chinese. Other citizens form southern Asia, like Sri Lanka and Bangladesh and some of them are already at the airport," says Sofiene. The UN's refugee agency says the exodus from Libya has become a humanitarian crisis. UN spokesman Firas Kayal said today that communities along the Tunisian border can't cope with the influx of refugees. "It's a true humanitarian emergency. The numbers are significantly on the rise. Yesterday we've witnessed the hugest number in the last days. It is only in twelve hours fourteen thousand people have crossed this border. There are thousands and thousands on the other side, as you can see behind us, and they are all willing to, want to move inside. The absorption capacity in the local community is reaching its absolute limit. The community cannot cope anymore. There is a huge and urgent need to evacuate people from the Tunisian side, and then to allow these people to come in, because the situation is becoming really chaotic….So there has to be massive effort — not just by one country, but an international effort to try to ease this situation a little bit. It's a humanitarian crisis, there has to be a concerted effort, governments have to take action right now". The International Organization for Migration has also stepped up its operations. It's chartered ships to take Egyptian workers from the Libyan port of Bengazi to Alexandria. It's also preparing to help thousands of workers from sub-Saharan Africa who are fleeing south into neighboring Niger. Greek ships carrying an estimated 4,000 Chinese workers have sailed into the port of Heraklion on Crete. The Mediterranean island nation of Malta is also playing a key role. On Tuesday a German ferry carrying 600 people who fled Libya sailed into the Maltese port of Valletta. There were Germans, Britons, Thais, South Africans and Filipinos aboard. They're expected to fly back to their home countries in the next few days.