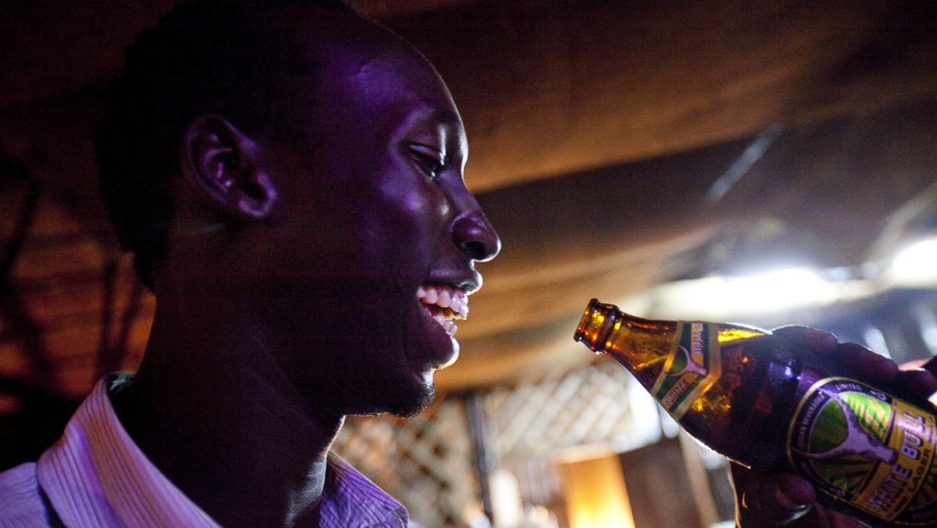 JUBA, Sudan — In July southern Sudan will celebrate its independence from the North and the freedom of its people to do what they want. And that includes drinking beer.

For 22 years alcohol was a casualty of Sudan's civil war between the Christian South and the Muslim North where booze was forbidden.

As soon as the peace accord came into effect in January 2005, trucks crossed the border from Uganda into southern Sudan carrying crates of Bell, Club and Nile Special, all popular Ugandan lagers sold in half-liter brown bottles.

Then in May 2009 Southern Sudan Beverages Limited (SSBL), a subsidiary of the global drinks giant SABMiller, opened Sudan’s first and only brewery outside the southern capital Juba to supply an expanding and thirsty local market.

It was an innovative move, not only because an alcoholic beer was being produced in Sudan, but also because there is so little manufacturing in southern Sudan.

The brewery is as alien as anything that has landed in Juba, a sprawling little city developing in rapid fits and starts as a result of the investment rush that followed peace in 2005.

There is no reliable power here so rows of huge generators chug away 24 hours a day. Vast containers hold gallons of water pumped out of the Nile River three miles away and purified before being added to barley, sugar and yeast imported by truck from Kenya.

Inside a hangar-sized warehouse are thousands of 110-pound sacks of malted barley, silver pipes snaking around silos and conveyor belts packed with recycled bottles being filled with freshly brewed beer.

Each day the brewery churns out 150,000 bottles of beer — “It’s hot out there, yah, people get thirsty!” said Alsworth-Elvey — but it is capable of producing four times that amount and with independence celebrations approaching that greater capacity will be useful.

SABMiller invested $51 million in the plant, making it one of the largest single investments in southern Sudan outside the oil or telecoms industries.

“SABMiller is particularly strong in emerging markets and we have a better appetite for risk than most of the other brewing companies,” said Alsworth-Elvey. “We recognized that if we got in here first we would have a big advantage. If it was a race, we wanted to win it.”

Currently the brewery employs 283 Sudanese workers but Alsworth-Elvey reckons that another 5,000 or so earn a living off the brewery by working as vendors or distributors.

Last year the brewery won a $1 million grant from the Africa Enterprise Challenge Fund (AECF) that will be supplemented by a $2 million investment from SABMiller to develop local production of cassava on a commercial scale. That locally-grown grain will be replace imported cereal ingredients for the locally brewed beer.

"This project will convert what is currently a subsistence crop into a cash crop, creating valuable and sustainable economic opportunities in a fragile region where, after years of fighting, the land has been depleted and is unsuitable for many crops,” said Mark Bowman, managing director of SABMiller Africa.

For now everything but the water is imported. When GlobalPost visited the brewery sacks of malted barley from Europe were stacked in the storeroom and the granulated sugar had been brought in from South Africa.

Neither ingredient can be found locally so the materials are shipped to Mombasa in neighboring Kenya then brought to Sudan on trucks. But, as Alsworth-Elvey insisted, “The major raw material in beer is water and that comes from the Nile River.”

Three brands of varying degrees of strength are brewed in Juba and being locally produced means they are a little cheaper, which makes them popular. The favourite is Nile Special, a beer brewed under license according to a Ugandan recipe with an alcohol content of 5.6 percent while Chairman’s ESB (standing for Extra Strong Beer) is the strongest at 7 percent, but the real innovation is White Bull, a light 4.2 percent lager brewed especially for southern Sudanese drinkers.

The choice of a white bull as the beer’s emblem was a smart one. The slaughter of prized white bulls, their heads bowed beneath heavy curving brown horns, marks auspicious occasions, and herds of the beasts can be found in pastoralist areas across the country.

“White Bull has taken off pretty well,” said Alsworth-Elvey. “The unique thing is that White Bull is ‘their’ beer, it has been very well accepted as a beer and carries with it some sort of national pride.”