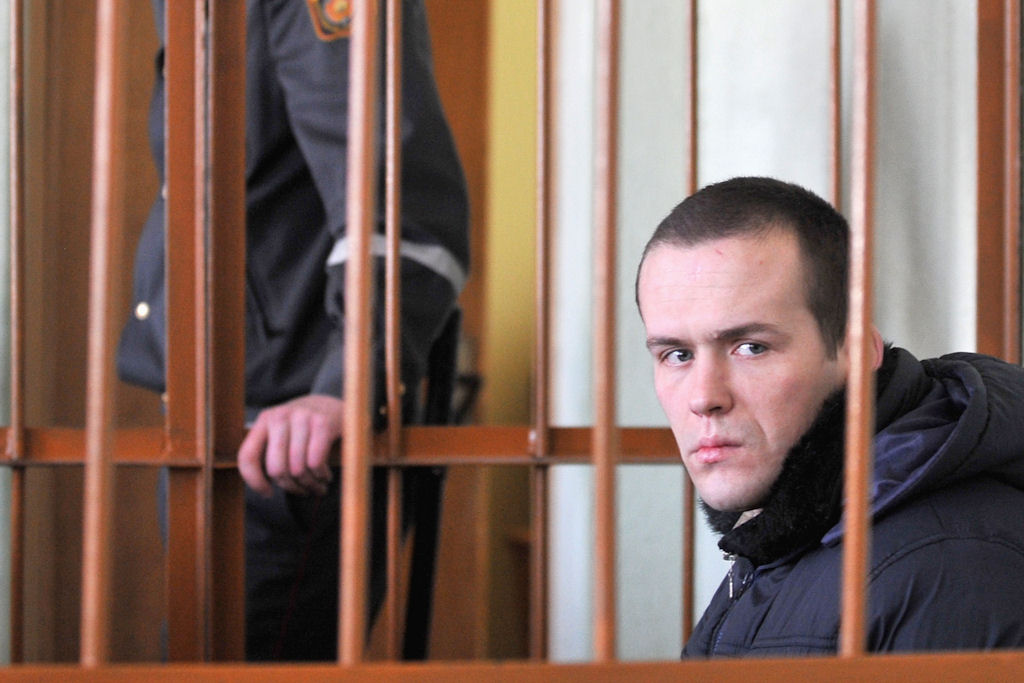 Vasily Parfenkov, one of the protesters detained after December's election in Belarus, sits in the defendant cage during his trial in Minsk on Feb. 17, 2011.
Credit: Viktor Drachev
Share

MINSK, Belarus — What to do with a problem like Alexander Lukashenko, the president of Belarus?

Western governments have imposed extensive sanctions against the former Soviet republic, including a travel ban against Lukashenko himself, but to no avail. The Belarusian leader shows no signs of relaxing a draconian suppression of the country’s political opposition.

The clampdown swept into force after thousands of anti-government protestors massed in the capital Minsk on the evening of Dec. 19 presidential elections. Lukashenko was declared victor with nearly 80 percent of the vote; the opposition claimed the contest had been grossly falsified. Some protesters tried to storm the main government building. Police violently dispersed the crowd and hundreds were detained in the subsequent clean-up action. Belarus authorities also harassed many political activists; many fled the country.

Now court cases have begun for more than 40 opposition leaders and activists who allegedly took a leading role in the protests.

Vasily Parfenkov, a 27-year-old campaign worker for the opposition candidate Vladimir Neklyaev, was the first to stand trial, on Feb. 17.

In a third-floor room in Minsk’s Frunzensky district courthouse, where potted plants on the windowsill spruce up an otherwise grim, institutional setting, Parfenkov admitted that he participated in the protests, but denied that he tried to storm the main government building. As per post-Soviet practice, he sat for the duration of the trial in a cage in the middle of the room, listening intently to the testimony, but occasionally holding his crew-cut head in his hands, shoulders hunched.

The evidence against him was sketchy at best. Video footage taken by the country’s security services appeared to show him at the front of the crowd at the building, punching and kicking the wooden barriers blocking the entrance. But it did not show him shattering the building’s glass doors or engaging in any overtly dangerous behavior.

Justice, so to speak, was swift. After only a few hours of testimony, Parfenkov was sentenced to four years in a maximum security prison for “participating in mass disorders” and additionally fined some $5,000 for damage to the doors. (The state prosecution had asked for a six-year sentence.) His lawyer said that he would appeal the decision.

Parfenkov was only a small cog in the opposition’s political apparatus. Before the elections he collected signatures to register his candidate, and then handed out flyers. Aside from the campaign work he was unemployed, drifting from job to job. His last instance of employment was as a construction worker in Russia. He also served 11 months of a previous jail sentence.

If a small fish like Parfenkov so easily received four years, what awaits the opposition’s actual leaders? Five of the nine candidates who opposed Lukashenko are being charged for “organizing mass disorders,” a charge that carries a jail term of up to 15 years. The Parfenkov trial may have been a message to what remains of the country’s independent civil society — and observers abroad — that any anti-government actions will be crushed.

The court cases resume today. Among those to be judged are two Russian citizens arrested in the police sweep and Alexander Otroschenkov, press spokesperson for opposition candidate Andrei Sannikov. The Kremlin, though nominally supporting Lukashenko in his stand off with the West, has criticized the arrests and called for a “fair” verdict for the Russian nationals, Artyom Breus and Ivan Gaponov.

Western reaction has been harsh. The United Nations and Organization for Security and Cooperation in Europe condemned the trials.

“The prosecution and sentencing are particularly troubling given that [Parfenkov], together with dozens of other opposition activists, is facing trial for exercising his right to freedom of peaceful assembly and freedom of expression,” said Navi Pillay, the U.N. high commissioner for human rights.

“The continued detention of political opponents, harassment of civil society and intimidation of the independent media are serious human rights violations,” she added.

Western countries also slapped a number of sanctions on Belarus, including a travel ban to Europe for more than 150 top Belarusian officials. The United States additionally prohibited American companies and individuals from doing business with Belarus’ state oil and chemical conglomerate Belneftekhim, a key source of income for the Lukashenko government.

At a conference in Warsaw, Poland at the beginning of February, international donors pledged $120 million in aid to the Belarus opposition and civil society organizations.

“Sooner or later you will be forced to flee, chased by your own people,” Radoslaw Sikorski, Poland’s foreign minister, warned Lukashenko in a subsequent statement.

But at a follow up conference in Vilnius, Lithuania to discuss how to disperse the aid, delegates conceded off-the-record that nothing short of crippling economic sanctions, targeted at the country’s oil refinery products sold in the West, would make the Lukashenko regime blink. Not even this would be guaranteed to have an affect, however — and given the EU’s difficulty in corralling its 27 member states into a single policy, it is less than likely to take place.

Lukashenko, as always, was unfazed by the criticism both at home and abroad.

“I’d like to spit on all their comments. They are angry and indecent people. One cannot talk to them or build any relations,” Lukashenko was quoted as saying, referring to comments from the country’s opposition. “We do not have any prisoners of conscience: They are ordinary bandits, who have several previous convictions.”

Later on, he added that he “would not have hesitated” to have called out the army against the demonstrators on election night, had the situation demanded it.