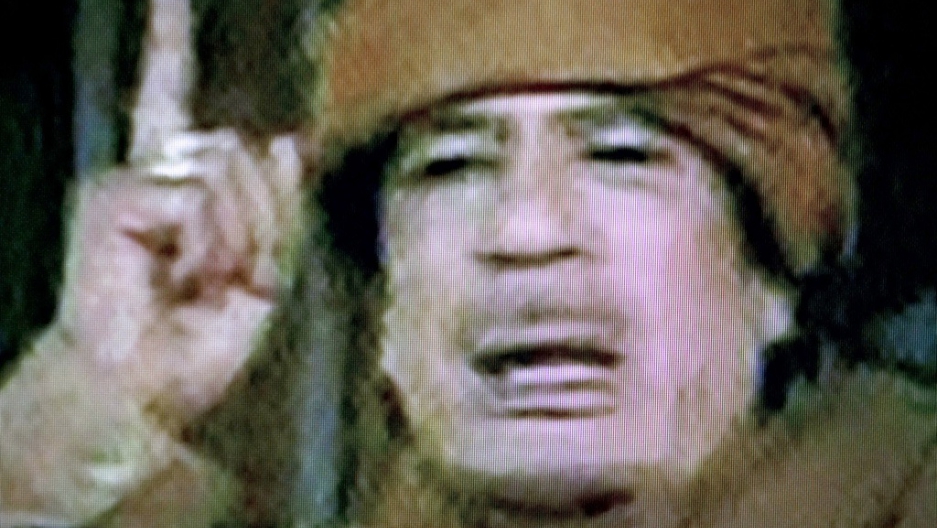 A picture of a television screening of Libyan leader Muammar Gaddafi gesturing while delivering a nationwide address on Feb. 22, 2011. Gaddafi gave a long and rambling speech in which he said he will stay in Libya as head of the revolution.
Credit: Joel Saget
Share

BOSTON — Already, many giga-pixels have been devoted to embattled Libyan Leader Muammar Gaddafi’s sartorial exploits and his chameleonic knack as a celebrity doppelganger.

But Gaddafi has a knack for quotes and nifty ideas as well. He has suggested that the Israeli-Palestinian conflict could be solved by creating one happy, unified state called “Isratine.”

Without losing sight of the fact that the elevator-hating, Ukrainian nurse loving Gaddafi is a murderous kleptocrat, here’s our tribute to his creativity as a wordsmith and purveyor of farfetched ideas:

“Rest assured... Oh, it’s raining. I was going to talk with the youths in Green Square, and spend the night with them tonight. But it’s raining, and that is a good omen. I just want to show them that I’m in Tripoli, and not in Venezuela. Don’t believe the broadcasts of those stray dogs. Bye!”

--- The entire text of a buoyant 22 second speech on Feb. 21, 2011 under a sprawling silver umbrella at his car door. It was his first TV appearance since the protest movement erupted in Green Square.

“Muammar al Gaddafi is not occupying a position to resign from the same way other presidents did. Gaddafi is not a president. He is a leader of a revolution. History! Resistance! Liberation! Glory! Revolution!"

"I will fight until the last drop of my blood with the Libyan people behind me ... we have been bitten by American aggression! They took away your children from you! Your children are dying for what reason, for what purpose? No reason. Your children died!"

"Take the greasy rats out of the street. If we have to use force, we will used it based on the Libyan constitution."

"[The protestors'] ages are 17. They give them pills at night, they put hallucinatory pills in their drinks, their milk, their coffee, their Nescafe."

“Bin Laden ... this is the enemy who is manipulating people ... Do not be swayed by bin Laden."

"Do as you please. You are free to dance, sing, and celebrate in all squares throughout the night. Muammar Gaddafi is one of you. Dance, sing, rejoice!"

“You must dance, sing, and prepare yourself ... this spirit you have is stronger than any other attempt by the foreigners and the enemies to destroy us."

--- From a Feb. 25, 2011 speech delivered overlooking Green Square. The Colonel wore a hunter's cap covering his ears. He blew kisses and shook his fists, at a chanting crowd of supporters.

Meanwhile, here’s a question from the editorial department: can anyone tell us why Gaddafi is still a Colonel?