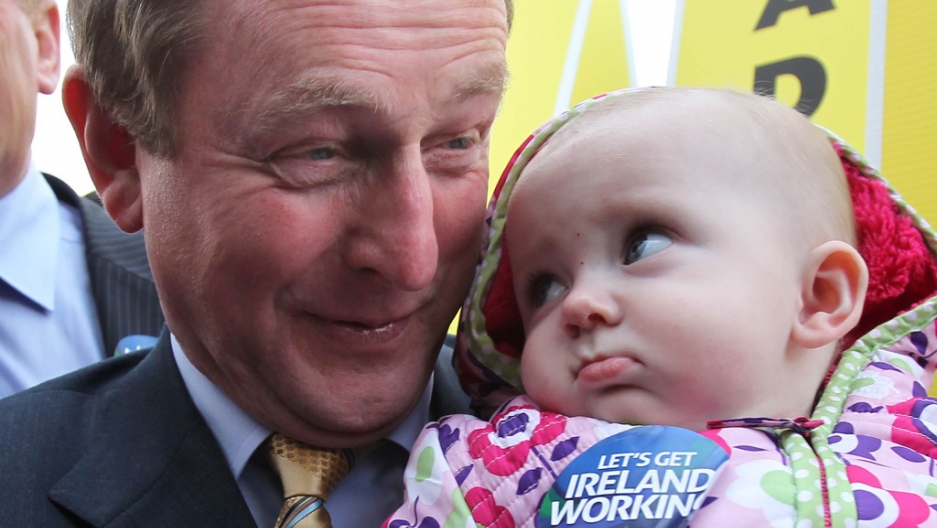 The center-right Fine Gael party, led by Enda Kenny, will form a new Irish government after winning the election. Here Kenny smiles as he holds 6-month-old May Hennelly during the campaign.
Credit: Peter Muhly
Share

DUBLIN, Ireland — A 60-year-old former schoolteacher from the west of Ireland has been given the task by the Irish electorate of leading the country out of its biggest financial collapse since independence in 1921.

Enda Kenny, leader of the Fine Gael Party, is set to become Ireland's next taoiseach (prime minister) following a surge in support for his center-right party, and the meltdown of the once-dominant Fianna Fail party in Friday’s general election.

Now Kenny has to make good on his promise to renegotiate the harsh terms of the financial bailout that Ireland was forced to seek from the International Monetary Fund and the European Central Bank at the end of 2010.

The election followed the break-up of the government led by Fianna Fail, which has been in power almost continuously since 1987, caused by the defection of its coalition partner, the Green Party.

Widely held responsible for policies that led to Ireland's world-record property crash and the near-collapse of the country’s banks, Fianna Fail was swept away in a tide of public anger.

All parties except the Green Party benefited from the big Fianna Fail slump, including Sinn Fein, whose leader Gerry Adams is sure of a seat in Louth. For the first time since the 1920s, Fianna Fail has failed to return a deputy from a number of multi-seat constituencies.

Fine Gael won an estimated 36 percent of the vote compared to Fianna Fail’s 15 percent. It is unlikely to achieve an overall majority, but is preparing to form a coalition government with the Labour Party, which won 20 percent support, its best-ever election result.

Dublin has become a Labour stronghold and only one of the 13 outgoing Fianna Fail deputies from the Dublin metropolitan area is expected to retain a seat. Under Ireland’s proportional representation system of voting, several candidates are elected from each of 43 constituencies to the 166-member Dail, the lower house of the Irish parliament.

Many analysts believe that with more harsh budgets on the way, Labour will provide a counter to the conservatives policies of Fine Gael. Both Fianna Fail and Fine Gael have their roots in the Irish Civil War of 1922-23 and have contested elections on similar social and economic platorms, based on a mixture of populism and open market economic principles.

The days when one of the two parties always formed a government may be gone for good after this election.

Kenny, who represents Mayo in the Dail, has promised to go to Brussels to renegotiate the harsh terms of the IMF-ECB bailout, which include large cuts in disposable incomes and pubic services. His ability to do so was enhanced — at least in voters’ eyes — when he held a high-profile meeting with German Chancellor Angela Merkel on Feb. 11 to discuss EU help for the Irish economy.

Kenny and Merkel are friends as both Fine Gael and Merkel’s CDU party are members of the center-right European People’s Party in the European Parliament.

With the hand-counting of paper ballots, it could take days before all surplus votes are transferred and all seats are decided but already by Saturday evening it was clear that Sinn Fein and independents are poised to play a significant role in opposition in the new parliament.

Sinn Fein’s Gerry Adams, who resigned his Belfast seat in the British House of Commons to cross the border and stand in County Louth, topped the poll and helped double Sinn Fein’s representation from five to an expected 10 seats.

Sinn Fein has transformed itself in the last 25 years from the political wing of the IRA to a voice for the under-privileged in society, and is the only party, other than the miniscule Green Party, which contests elections in both Northern Ireland and the Republic. Gerry Adams’s colleague, Martin McGuinness, is the deputy first minister in the Northern Ireland Executive.

The Green Party was severely punished by the electorate for its role in coalition with Fianna Fail, and is expected to lose all of its six seats in the outgoing Dail.
Independents did exceptionally well in the Irish poll, taking up to 15 percent of first preference votes.

Independent candidate Shane Ross, who has made a name highlighting the cronyism among politicians, bankers and property developers that caused the financial crash, topped the poll in Dublin South.