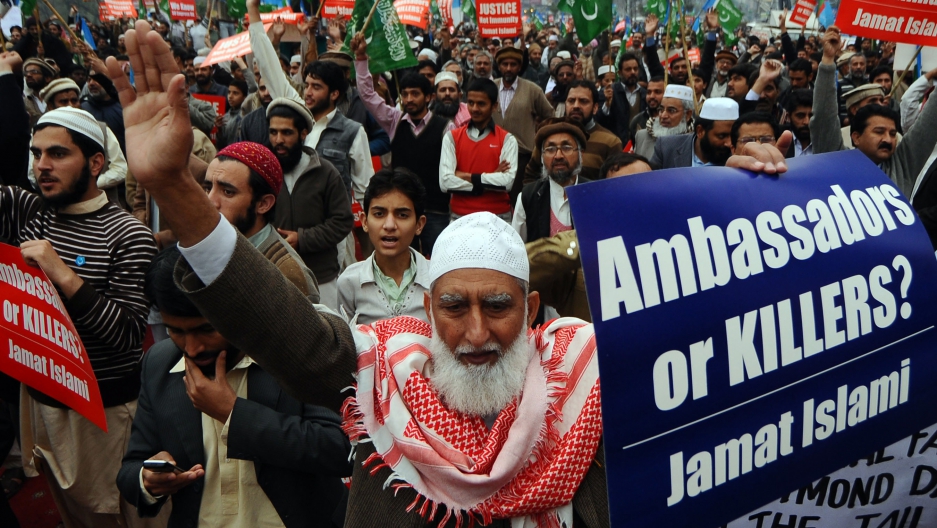 Activists of the Pakistani fundamentalist Islamic party Jamaat-i-Islami (JI) shout slogans during a protest against arrested US national Raymond Davis, in Lahore on Feb. 25, 2011. The CIA contractor, charged with double murder after shooting dead two men in Pakistan, refused to sign a charge sheet in court on February 25 and insisted he had diplomatic immunity, lawyers said. The hearing was adjourned until March 3.
Credit: Arif Ali
Share

Raymond Davis, the American C.I.A. agent accused of killing two Pakistani men, appeared in a Pakistani court amid tight security Friday where he was handed documents that detailed the case against him.

But the 36-year-old, variously described over the past few weeks as a U.S. diplomat, security guard and embassy staffer, initially refused to accept them because they were in Urdu, a language he did not understand. Clerks were told to translate the documents to English.

Davis told the judge that he should be released from jail because he had diplomatic immunity, repeating what other U.S. officials have said since Davis was arrested.

The judge said he was waiting on a response from the Pakistani government on the issue and adjourned the court until March 3, when Davis is expected to be formally charged.

The press and public have excluded from the trial in Kot Lakhpat jail, where Davis has been held since he shot dead two men on a busy Lahore street on Jan. 27.

The case has strained relations between the United States and Pakistan, a key ally in the war against Al Qaeda and the Taliban in neighboring Afghanistan.

And more than three weeks after the shooting, which the U.S. described as an act of self-defense, Pakistanis remain outraged and questions about Davis and his presence in Pakistan remain unanswered.

In the absence of verifiable details, wrote GlobalPost's Nicolas Brulliard, the Pakistani media has weighed in, suggesting that the C.I.A. collaborates with the Pakistani intelligence services and, as evidenced by diplomatic cables released late last year by Wikileaks, the Pakistani government has condoned the American drone strikes on its territory as part of the war in the Af-Pak borderland.

Davis was first described by U.S. authorities as a diplomat on “administrative and technical staff,” heightening suspicions about the official version of events on Jan. 27.

The U.S. has said Davis was providing security to other C.I.A. staffers in Lahore, but Pakistan's powerful Inter-Services Intelligence said the government of President Asif Ali Zardari had pushed visa policies that made it easier for C.I.A. employees and contractors to operate secretly in the country.