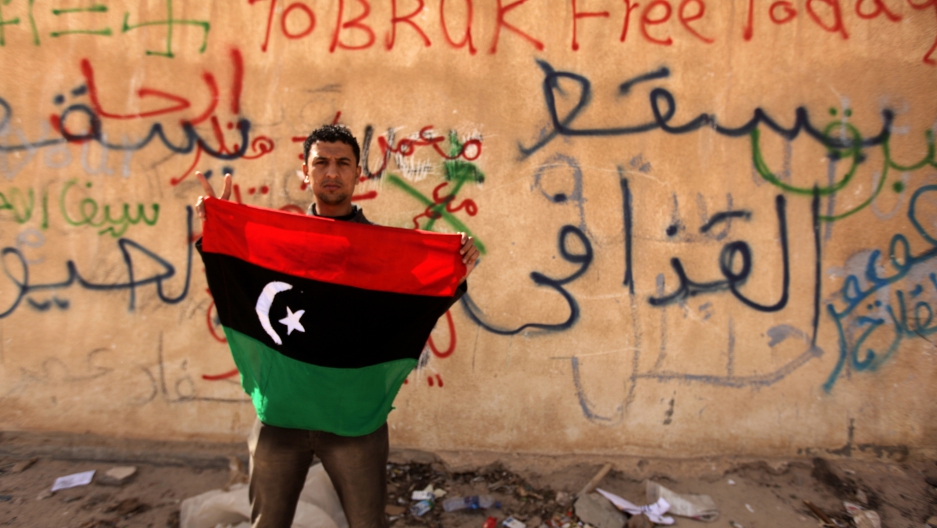 A Libyan anti-government protester holds his old national flag in front of a wall covered with graffiti against Libyan leader Muammar Gaddafi in the eastern city of Tobruk on Feb. 24, 2011.
Credit: Patrick Baz
Share

Muammar Gaddafi appeared in Tripoli on Friday, as news networks reported several people killed in heavy fighting in the capital.

Gaddafi spoke to a crowd of supporters in Green Square, a bastion of pro-regime support over the past nine days of unrest, according to reports.

Of the rebels who've taken control in many parts of the country, he said: "Respond to them, put them to shame" and "we can triumph over the enemies."

Alternately blowing kisses and shaking his fist in the air, Gaddafi said: "This nation, we are the nation of dignity and integrity, this nation has triumphed over [former colonial power] Italy."

Becoming more animated, Gaddafi reportedly shouted: "This spirit you have is stronger than any other attempt by the foreigners and the enemies to destroy us."

And: "Do as you please. You are free to dance, sing, and celebrate in all squares throughout the night. Muammar Gaddafi is one of you. Dance, sing, rejoice!"

Earlier, Gaddafi's regime had said it would more than double some public sector workers' wages and promised $400 for every family in Libya, in an apparent last-ditch attempt to hold on to power.

US, UN move against Libya

The U.N. Human Rights Council, meanwhile, unanimously called for Libya to be suspended from the body and for a probe into violations by the regime. Agence France-Presse reported that the 47-member U.N. body decided to "urgently dispatch an independent, international commission of inquiry... to investigate all alleged violations of international human rights law in Libya."

It recommended the move to the U.N. General Assembly, "in view of the gross and systematic violations of human rights by the Libyan authorities."

Earlier Friday, the U.N. High Commissioner for Human Rights Navi Pillay called for international intervention in Libya to stop mass killings and bloodshed that may amount to crimes against humanity. Pillay said thousands of people may have been killed or injured in the mounting violence against anti-government protesters, many by shots to the head or chest, Reuters reported.

Libyan diplomats at the U.N. in Geneva became the latest officials of Gaddafi's regime to announce that they were defecting to the opposition, VOA reported.

Libyan state television, meanwhile, said the special allowances for all families would help to cover food costs sent spiralling upwards during more than a week of anti-government protests that have turned over control of large portions of the country to anti-government forces.

GlobalPost correspondent Nichole Sobecki reports from Benghazi, where the rebellion began a week ago, that the opposition is now firmly in control of the city. She says there is a feeling of pride among the people of Benghazi that they overthrew Gaddafi's forces and are now creating a sense of order not felt under the regular government.

Forces loyal to Gaddafi, meanwhile, are fighting rebels for cities near the capital. His henchmen — many of them mercenaries from other African countries, according to reports — still control Tripoli, after cracking down on anti-government protests several days ago.

Gaddafi on Thursday blamed Osama bin Laden for inciting violence in his oil-rich North African nation, saying his Al Qaeda forces had given "hallucinogenic" drugs to youth in Libya — "in their coffee with milk, like Nescafe" — to get them to incite unrest.

The protests in Libya are the latest to sweep North Africa and the Middle East, but the crackdown by Gaddafi has proven to be the most brutal by any of the Arab leaders.

France's top human rights official said Thursday that up to 2,000 people could have died since the protests began on Feb. 17.

The opposition here continues to claim that the city is firmly in their control. They have been largely successful in maintaining calm and order. Volunteers have taken over the former internal security building and courthouse, organizing the town’s security, cleaning up, providing food, assisting foreign journalists, and beginning the long road towards governance. The only gunfire on the streets has been celebratory, uniformed traffic police direct traffic in the center of town and a few of the city’s banks have reopened.

"For 42 years we were kept alive-dead," said Hana Kahlig, a human rights organizer volunteering at the courthouse. "We didn't have freedom of speech, education is below zero. He [Gaddafi] treated us like cockroaches, forcing us to live without lights or water. Now we want to live with freedom, just like everyone else."

Tens of thousands of people gathered outside the courthouse for Friday prayers this afternoon and former soldiers who had defected helped keep the crowd organized. An imam spoke on a raised stage and over loudspeakers about liberating Tripoli and the fight for freedom.

Funeral services were also held today for three of the victims of this past week’s clashes between the opposition and forces loyal to Gaddafi.

There remains, however, a sense of uncertainty over how long this newfound peace will last, and some question whether or not Gaddafi will target Benghazi, the birthplace of this revolution.

Switzerland on Friday ordered the country's banks to block any assets belonging to the regime of Gaddafi, marking Bern's fourth such freeze in the last month involving assets that may belong to African and Middle Eastern leaders.

It previously ordered a freeze of any assets belonging to the regimes of former Egyptian President Hosni Mubarak and former Tunisian President Zine al-Abidine Ben Ali, as well as Ivory Coast's Laurent Gbagbo, who has refused to step down after an election which the outside world says he lost.

Switzerland has long been considered a safe haven for illicit assets deposited by corrupt leaders and strongmen.

The blocking order, which includes real estate and luxury goods and covers 29 people, including Gaddafi's wife and children, relatives of his wife and six government officials, takes immediate effect and lasts for three years, according to the Wall Street Journal.

U.S. President Barack Obama spoke with European leaders Thursday to coordinate an international response to the crisis in Libya. The president spoke with the leaders of France, Italy and the United Kingdom as he sought to ensure the safety of Americans in Libya and bring an end to the violence against the Libyan people.

Obama discussed with the respective leaders various ways to hold the Libyan government accountable for its violent crackdown over the past week and efforts to provide humanitarian assistance, according to a White House statement.

The U.S. has said that all options are under consideration, including sanctions about the Libyan regime and enforcement of a no-fly zone.

Obama and the European leaders will also work closely on the evacuation of foreigners, according to British Prime Minister David Cameron's Downing Street office.

Cameron stressed "the importance of seizing this moment of opportunity for change in the region," according to his spokesman.

The prime minister, on a visit to Muscat, told BBC, "The behavior of this dictator cannot be allowed to stand."

On Wednesday, Obama made his first public statement concerning the crisis in Libya, calling the crackdown by leader Muammar Gaddafi "outrageous" and "unacceptable."

Gaddafi's forces reportedly used automatic weapons and an anti-aircraft gun to attack Zawiya, a city 30 miles west of Tripoli on Thursday. They opened fire on a mosque, blasting the minaret with the anti-aircraft gun, where residents tried to fight back with hunting rifles. The fighting lasted four hours and left at least 100 dead, reported the New York Times. A Libyan news site put the death toll at 23.

A witness told AP that the residents at the mosque were holding a sit-in to support demonstrators in Tripoli.

Gaddafi's forces also tried to take back control of Misrata, Libya's third largest city and long a Gaddafi stronghold, by attacking dissidents at the airport with rocket-propelled grenades and mortars. Anti-government demonstrators had largely taken control of the city, which is about 120 miles east of Tripoli, on Wednesday.

Reuters reports that anti-government forces secured the city after the battle at the airport.

"Calm returned to the city around four hours ago after intense fighting in the morning," a witness told Reuters. "The people's spirits here are high, they are celebrating and chanting 'God is greatest.' "

Opposition forces have taken control in most of the eastern half of the country.