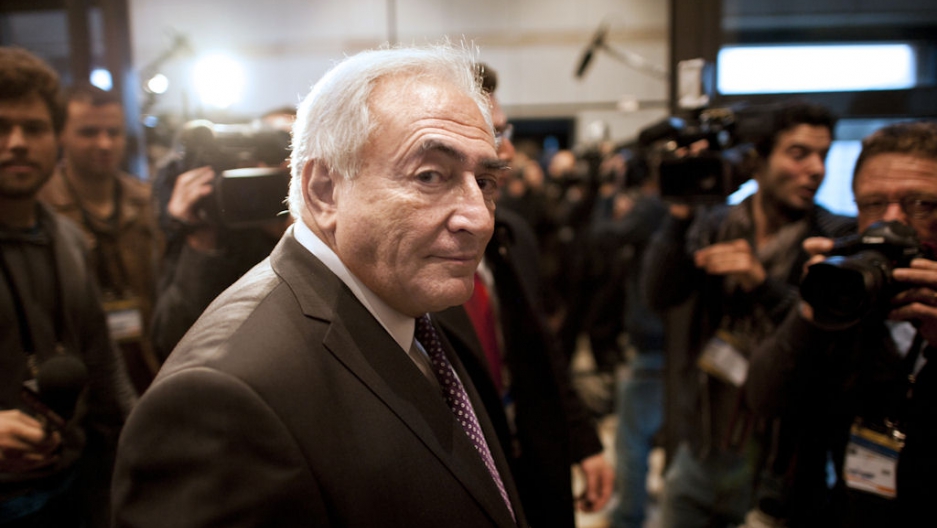 PARIS, France — Last week's G20 summit in Paris gave French president Nicolas Sarkozy an opportunity to improve his image as a statesman, both at home and abroad, amid sagging approval ratings. Instead, the man who might beat Sarkozy in next year’s presidential election stole the show.

Crowds of photographers and cameramen swarmed Dominique Strauss-Kahn, head of the International Monetary Fund (IMF). Television stations even dispatched cyclists to follow him along the road. As a press photographer bluntly put it before the summit photo op, “Strauss-Kahn is the star, we don’t care about the other guys!”

Center-left politician Strauss-Kahn, who lives in Washington, D.C. and made headlines after he had an affair with an IMF colleague, is portrayed by many as France’s providential statesman — the man best positioned to succeed Sarkozy.

“I think that Strauss-Kahn could beat Sarkozy,” said Dominique Moisi, a French political expert at the French Institute of International Relations. “He is very tempted by the adventure.”

According to the most recent CSA institute opinion poll, in the next presidential election’s runoff Strauss-Kahn would win over Sarkozy with 61 percent of the vote.

“Sarkozy has implemented necessary reforms,” said Moisi, “but there has been an emotional divorce between Sarkozy and the French. The president has lost touch with the French, which partly explains this excitement about Dominique Strauss-Kahn.”

A man who drew inspiration from the American and English economic system, Sarkozy was originally elected based on his energy and his promise to boost the country’s economy. But he has disappointed many French people with his style. Often described as ostentatious and aggressive, Sarkozy has been dubbed “le president bling-bling.”

Sarokzy also stained his reputation abroad when he expelled gypsies from France last summer. The families were kicked out of their makeshift camps and sent back to Romania and Bulgaria.

By contrast, Strauss-Kahn is seen as a more presidential figure. The fact that he lives in the United States might have something to do with it.

“There is something romantic about the fact that he lives abroad,” said Stephane Rozes, opinion strategy adviser with Cap consulting. “Everyone can project what they want on Strauss-Khan. People from the left see him as a socialist, and people from the center-right, with whom Sarkozy is at odds, see Strauss-Kahn a modern socialist.”

But for now, Strauss-Kahn is not officially a candidate. And making it official would force Strauss-Kahn to quit his prestigious international job and lavish lifestyle to jump back into the shark tank of French politics.

He took the IMF post after losing the Socialist presidential candidacy for the 2007 election to Segolene Royal, who lost to Sarkozy. Strauss-Kahn, a professor at Paris' preeminent Sciences-Po university, had served as economy minister in the late 1990s.

So far, he has dodged questions about a return to politics. Asked by French daily Le Parisien whether he would run in next year’s presidential election, Strauss-Kahn answered: “I cannot answer questions about French politics. Today, I have a job that keeps me busy more than 35 hours a week [the legal work week in France]. ... I believe what I do is useful. I am dedicated to it, and not to something else.”

As head of the IMF, Strauss-Kahn said he is not allowed to comment on his own country’s politics.

However, his wife, Anne Sinclair, who once was a prominent television news anchor, has used her own blog to comment on French social issues.

“After a law on the muslim veil, blunders against the gypsy Roma, we are being told that we urgently need a national debate about Islam,” Sinclair wrote. “What is the result? [Far-right candidate] Marine Le Pen is supported by 20 percent of the French according to opinion polls. What a success!”

(Sinclair told reporters she forgave her husband for his high-profile affair, for which he apologized to the IMF. The French, for their part, are accustomed to high-profile politicians having mistresses.)

Glossy magazines have jumped at the chance to compare Sinclair to first lady Carla Bruni. A recent poll showed that 65 percent of the French prefer Sinclair to Bruni.

Sinclair told French magazine Le Point that she hopes her husband will not bid for a second term at the IMF.

If it's a strategy, keeping the French in suspense has been a brilliant one, fueling intense speculation over Strauss-Kahn’s intentions and drawing disproportionate attention to his interviews and public appearances.

According to Rozes, the mystery makes Strauss-Kahn even more desirable — and the head of the IMF might be delaying an announcement to keep his popularity as high as possible.

“If he comes to Paris, Strauss-Kahn will go down in the opinion polls,” said Rozes, “because he will have to make choices, to take clear positions on important issues. It will be the end of this romantic soap opera between him and the French.”

Strauss-Kahn would then have to tackle France’s burning issues — on top of the list: high unemployment, slow growth, and a lack of cohesion in French society.

For that matter, the head of the IMF will probably try and leverage his expertise as a high-profile economist to convince the French that he is the man to get France’s economy back on track.

“What matters,” Strauss-Kahn told the France 2 television station, “is what happens in the street for a man who is looking for a job, and doesn’t find one, who struggles to pay his electricity bill and his rent.” Strauss-Kahn also added that “6 million employees make less than 750 euros [$1,020] a month.”

As head of the IMF, the institution Argentina blames for its financial ruin because it provided loans with unbearable interest rates, Strauss-Kahn has been criticized by some his fellow socialists for being too liberal.

But if he does decide to run in the election, his image as a moderate socialist is likely to play in his favor.

“France is ideologically left-wing,” said Rozes, “but politically it is right-wing. The people will want the new president to drag France out of its economic slump, but with social justice.”