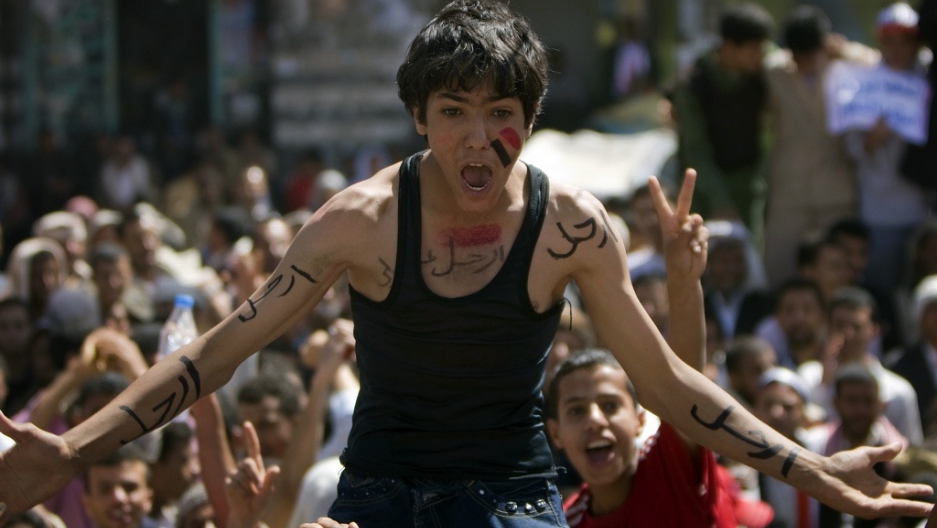 Yemeni anti-government protesters demonstrate to demand the resignation of President Ali Abdullah Saleh after three decades in power on February 26, 2011 in Sanaa. Important Yemeni tribal leaders, including those of the Hashid and Baqil, pledged to join protests today at a gathering north of the capital.
Credit: Ahmad Gharabli
Share

As news emerged of more killings during protests in the Libyan capital Tripoli on Friday, residents of other Middle Eastern capitals took to the streets, claiming solidarity with Libyans in their stand against Muammar Gaddafi and voicing complaints against their own leaders.

Tens of thousands of Egyptian protesters who had gathered in Cairo's Tahrir Square were dispersed by the army on Saturday. The demonstrators had gathered in the square on Saturday and earlier on Friday, calling for the removal of their interim government and an end to the country's notorious 30-year-old emergency law.

GlobalPost's Jon Jensen reports from Cairo that the army in general used little force in breaking up the demonstration. The peaceful protest in Tahrir came just one day after violent protests in Maadi, an upscale suburb just south of Egypt's capital. Hundreds of protesters occupied a square in Maadi on Thursday, torching two security vehicles following a police shooting of a microbus driver there, Jensen wrote.

Egypt's military — which took power following Mubarak's resignation on Feb. 11 — has been struggling to restore calm and order following weeks of protests and strikes in the Arab world's largest nation.

Much of the anger on Friday was directed squarely at Mubarak holdovers in Egypt’s new cabinet, specifically Prime Minister Ahmed Shafik, a top ally of the former president.

“We will stay here until Shafik leaves,” said Hatem Amin, 34, an activist protester. “He is a part of the old regime, and just as corrupt as Mubarak.”

A prominent Bahraini opposition leader returned from exile Saturday and urged the kingdom's rulers to back up reform promises with action as thousands of demonstrators marched on government buildings in the capital. The return of Hassan Mushaima, a senior Shiite figure, could mark a new phase for the anti-government movement in the tiny Persian Gulf nation which is a strategically important American ally, according to the UK Press Association.

Mushaima heads a Shiite group known as Haq, which is considered more hardline than the main Shiite political bloc that has helped drive two weeks of protests. He was embraced and kissed by a small group of supporters as he returned from several months of voluntary exile in London.

Mushaima's return follows a day of pro-democracy demonstrations that blocked miles of downtown roads and highways in Manama, the capital, on Friday, according to the New York Times.

The mass rally was held to honor the victims killed in the recent police crackdown. At least seven protesters have been killed during clashes with security forces since the beginning of pro-democracy protests in Bahrain on Feb. 14.

Protesters demand major reform including the election of the prime minister and the creation of a "real" constitutional monarchy, according to Press TV.

Meanwhile, the leader of Bahrain's largest opposition party told CNN Friday that he'd been prevented from returning home, after being detained in Lebanon, where the authorities seized his passport, saying there was a warrant for him from Interpol, the international police organization.

Hassan Mushaimaa, leader of the Haq Movement, pointed to underhanded tactics by the Bahraini government.

"My lawyer confirmed that no such warrant has been issued," Mushaimaa said Friday. "If I was wanted by the Interpol, I would have not been allowed to leave London.

"What is happening to me would show clearly how this regime [in Bahrain] is using lies and deceptions. How can there be a call for national dialogue while I am banned from returning to Bahrain?"

Iraq’s largest oil refinery, in Baiji, was crippled by a predawn attack on Saturday in which gunmen stormed the vast complex, killed one engineer and set off several bombs. The attack shut down parts of the Baiji Refinery, halting the production of about 150,000 barrels per day of petroleum products and threatening to interrupt supplies of heating oil, gasoline and oil for generators for millions of people in northern Iraq, according to the New York Times. It is expected to take months to repair the pipelines, cables, furnaces and other equipment damaged by the explosions and fires, according to the director of the refinery. Fuel and power shortages across Iraq are expected.

Elsewhere in Iraq, protests continued as demonstrators turned out in the streets. Their numbers were far smaller than Friday when at least 16 protesters were killed across the country. On Saturday, one person was killed in confrontations between security forces and demonstrators in the city of Kirkuk.


The Friday demonstrations were to protest against corruption and a lack of basic services in an organized nationwide "day of rage."

In the capital, Baghdad, protesters reportedly clashed with riot police, sometimes violently. Hundreds of people carrying Iraqi flags and banners streamed into Tahrir Square, which was under heavy security, according to Al Jazeera. Elsewhere, demonstrators knocked down blast walls, threw rocks and scuffled with club-wielding troops.

Friday's demonstration, planned for weeks, is the latest in a series of protests in Iraq. Demonstrators have been calling for better public services and measures to clean up government corruption.

Ahmed Rushdi, head of the House of Iraq Expertise Foundation, said he tried to join the protests in Baghdad but was prevented from doing so by the army.

"This is not a political protest, but a protest by the people of Iraq. We want social reform, jobs for young people and direct supervision because there is lots of corruption," Rushdi told Al Jazeera.

The leader of one of Yemen's most important tribes joined the anti-regime movement Saturday, effectively abandoning President Ali Abdullah Saleh and escalating pressure on the leader to step down.

"I have announced my resignation from the General People's Congress in protest at the repression of peaceful demonstrators in Sana, Taez and Aden," Sheikh Hussein bin Abdullah Ahmar told members of the Hashid tribe in a gathering north of Sana, the capital, according to the Los Angeles Times. Tribe members reportedly broke out into anti-government chants after his remarks.

The Hashid tribe is one of Yemen's largest and most influential. Also at the meeting were members of the Baqil tribe, according to news network Al Arabiya. Both tribes are said to have withdrawn support from the Yemeni leader.

Saleh has ruled the country since 1978, maintaining his grip on power by courting allegiances from key members of the powerful tribes.

The resignations came after the death toll rose to four Saturday after police reportedly fired into a crowd of protesters.

About 180,000 protesters took to the streets Friday in the largest pro-democracy demonstrations in the nation's history. The protests were markedly larger than ones earlier in the week, which mostly consisted of students.

Tens of thousands of Yemenis held demonstrations in the capital on Friday, with opponents of President Ali Abdullah Saleh and loyalists protesting just two miles apart from one another, Reuters reported.

Outside Sanaa University, where earlier this week pro-government elements opened fire on 3,000 Yemenis calling for an end to Saleh’s 32-year rule, killing two, anti-government protesters chanted: "The people demand the downfall of the regime."

Across town, loyalists shouted support for a leader they said was holding the fractured and impoverished tribal nation together. "The creator of unity is in our hearts. We will not abandon him," they chanted.

Hundreds of tribesmen from areas surrounding Sanaa have arrived at Sanaa University to join in the call for Saleh to relinquish power, reports Jeb Boone for GlobalPost. One tribesman from Arhab promised that hundreds more from his village would arrive soon.

Many tribal leaders in the country's unsettled north have pledged loyalty to Hamid al-Ahmar, a leading member of Yemen’s Islamist political party, risking a dangerous split in loyalties between Ahmar and Saleh, whose father is a member of the northern confederation of tribes.

A revolution in northern Yemen could descend into a civil war split between factions loyal to Saleh and the other loyal to al-Ahmer, writes Boone.

Thousands protested in Amman in what many said was the largest of eight consecutive Friday demonstrations in the Jordanian capital, reports GlobalPost contributor Heather Murdock.

They were joined by thousands of police officers, who passed out juice boxes and water bottles.

Locals say soaring prices for goods and services, low wages and government corruption continues to drive the unrest, and new groups are traveling to Amman each time to join the demonstrations.

Many planned to camp out on the streets overnight, and said they would not leave until they were guaranteed that their demands would be met.