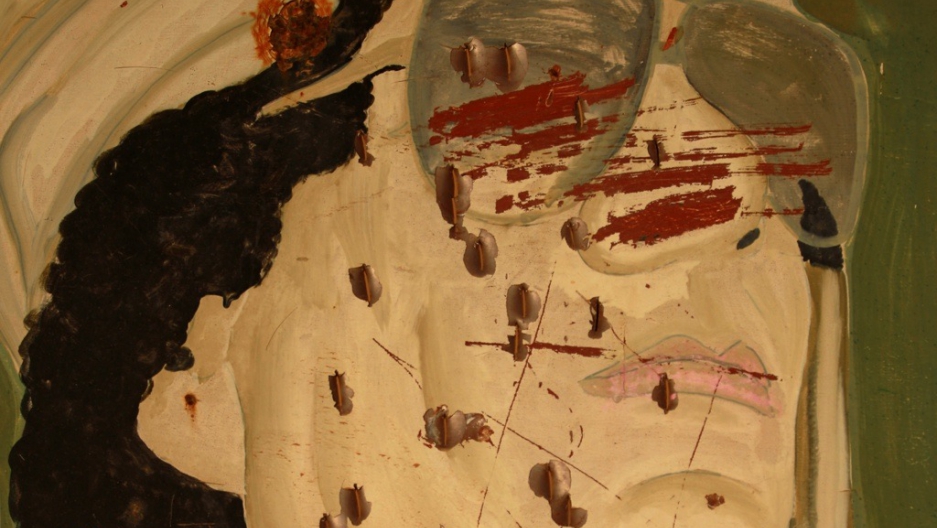 A vandalised portrait of Libyan leader Moammar Gaddafi at an abandoned army base in the eastern dissident-held city of Tobruk on February 24, 2011. The base was stormed by anti-government protesters on February 20.
Credit: Patrick Baz
Share

Despite assurances that Muammar Gaddafi would "go like Hitler" and commit suicide rather than go into exile, speculation has mounted as to where the Libyan dictator would flee.

Venezuela is a top prospect. Gaddafi was compelled to appear on state TV this week to deny reports that he had fled to the allied Latin American nation. The British foreign secretary, William Hague, no less, cited "credible" Western intelligence reports saying Gaddafi was headed there.

The release this week by WikiLeaks of U.S. diplomatic cables indicated a tight diplomatic and political alliance between Gaddafi and Venezuelan president Hugo Chavez. During an African-South American summit held on the Venezuelan island of Margarita in 2009, Chavez and Gadhafi congratulated each other on their "revolutions," with Chaves reportedly asserting: "What Simon Bolívar [the Great Liberator of South American independence against the Spanish] is to the Venezuelan people, Gaddafi is to the Libyan people."

Nicaragua's leftist president, Daniel Ortega, is the only leader to openly embrace Gaddafi this week, saying that he phoned the Libyan leader several times because because he "is again waging a great battle" to defend the unity of his nation. Ortega, whose long-standing alliance with Gaddafi is based on a shared distrust of the U.S., said: "it's at difficult times that loyalty and resolve are put to the test."

Then there was the report that Zimbabwean President Robert Mugabe might be flying commandos to Libya to crack down on dissenters. The Economist reported that Zimbabweans — along with troops from Chad and Guinea — were the mercenaries shooting from helicopters at people demanding that Muammar Gaddafi step down.

Cuba's Fidel Castro, meanwhile, suggested that NATO might be planning an invasion of Libya. But like Chavez and Ortega, he did not go as far as to outright offer Gaddafi a place to run.

But Saudi Arabia's relations with Libya have been strained for years; in 2009 Gaddafi told King Abdullah: "You are propelled by fibs towards the grave and you were made by Britain and protected by the U.S."

Burkina Faso, Chad, Equatorial Guinea and South Africa were among the other contenders being floated by analysts if Gaddafi were forced to seek asylum, according to the Guardian.

Bizarrely, anti-apartheid icon Nelson Mandela is considered a friend, and was once quoted as saying: "Those who feel irritated by our friendship with President Gaddafi can go jump in the pool." The retired president apparently never forgot Gaddafi's support for the African National Congress during its struggle against apartheid.

Gaddafi — who has referred to himself as the "doyen of Arab leaders, king of kings of Africa and imam of all Muslims" — has a long history with the rest of Africa, which intensified after he switched from promoting Arab unity to buying influence at the African Union – debts he may now seek to call in, according to the Guardian.

Gaddafi, the paper wrote, put past conflicts with Chad behind him to sign bilateral security and trade agreements. He also has friends in Senegal, where he laid the foundation stone of the $250 million Gaddafi Tower, though the project seems to be on hold. Senegal supported his proposal for a United States of Africa.

Adekeye Adebajo, executive director of the Center for Conflict Resolution at the University of Cape Town in South Africa, said in an interview that: "He has enough friends to be able to find a safe haven in many parts of Africa, but obviously there would be a lot of people scared to take him."

However, Adebajo also noted Gaddafi's past involvement in funding rebel movements in Liberia and Sierra Leone. "A lot of insecure African leaders would be nervous to have him on their territory."

Mustapha Abdel Jalil, Libya's justice minister until he quit over the bloody crackdown on protesters, said this week he expected Gaddafi to make good on his pledge to die on Libyan soil rather than slink into exile.

Hitler committed suicide in his bunker in Berlin in April 1945 as his Nazi empire fell apart.