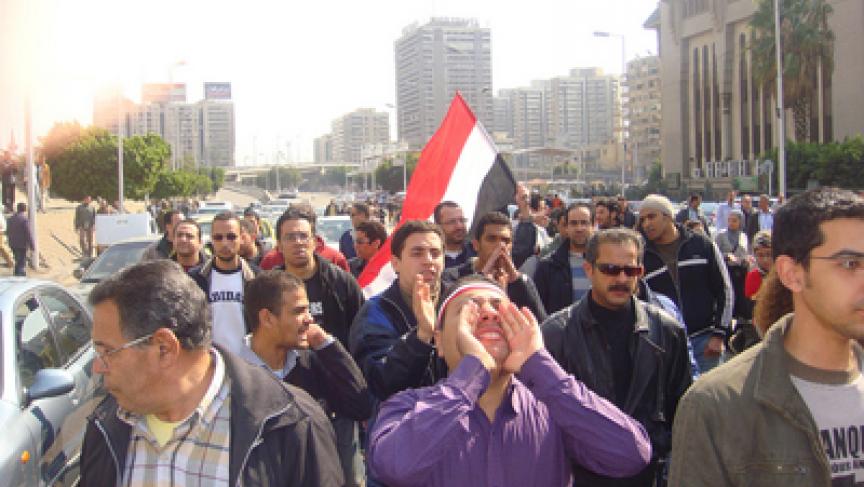 Share
By Ursula Lindsey Egypt remains in ferment. The Egyptian military has created a committee to amend the country's constitution and has formed a caretaker government. Some said it's time to wait and see what the armed forces will deliver. But protest organizers said they need to keep pressure on the military to move towards real reforms. This week, about fifty bank workers gathered in front of their bank's headquarters in Cairo. They called on top bank officials by name, chanting: 'Why are you hiding!?' The workers wanted the bank chairman's resignation, and salary raises. They said if their demands aren't met they'll go on strike next week. So far, despite warning from the military, there have been strikes by workers at textile factories, the Suez Canal, electrical companies, and the Cairo airport. And this Friday, once again, large demonstrations are planned in Tahrir Square and elsewhere. That's because protest organizers believe the revolution is far from other. Mubarak cronies The interim government is made up in large part of cronies of former president Hosni Mubarak. And protesters don't trust them. "We stress our demands for a speedy formation of a government made up of independent figures and technocrats who are qualified to run the country until an elected government is formed," said, Ahmad Naguib, who spoke for the protest organizers at a press conference this week. "We stress the need to quickly purge all state institutions of the former regime. Those corrupt figures should be held accountable." "Purging" state institutions isn't easy, though. Sabah Hamamou is a reporter at Al Ahram, Egypt's flagship state newspaper. While her newspaper was strenuously supporting former President Mubarak, she was posting home-made videos of violence against protesters to her blog and even sleeping in Tahrir Square. After President Mubarak resigned, all government newspapers, from one day to the next, came out in support of the revolution. But at a recent editorial meeting, Hamamou and a few of her younger colleagues confronted management. "They were talking about the revolution and blah blah blah," Hamamou said. "So after they finished I stand and told them, with all respect for these senior colleagues, none of these people at this table right now slept in Tahrir or participated in Tahrir, so please stop ignoring us, you've been doing that for whole decades. Give us a chance to be part of this." The reaction, she said, was explosive. Her editors first shushed and then yelled at her. Some colleagues took her side. "It was very chaotic," Hamamou said. "Another colleague of mine got really angry and said: 'I've been working in this place here for 16 years and nobody knows me because I'm not allowed even to publish freely my articles if I want to publish it as it is.' I raised my voice as well. There was, I don't know how to put it in English, lots of feeling in it. We are very angry, people in their thirties, early forties. Because it's our own revolution," Hamamou said. Hamamou is circulating a petition calling for the CEOs and editors of state newspapers to resign; for new, objective editorial guidelines; and for a more equitable pay scale. But her outspokenness has made her the target of reprisals, she said. Someone circulated an anonymous letter in her office accusing her of being an opportunist who benefitted from the old regime. Changing too fast? Meanwhile, some believe you can only expect so much change, so fast. Farouq ElBaz is a renowned Egyptian-American scientist. He supported the protests and came back to Cairo recently for a round of meetings with both youth groups and government officials. He said after every revolution world-wide, throughout history, there is a period of imbalance." "And people that don't know what will happen," ElBaz. "And the people who were crushed by the revolution would like to come back." But ElBaz is optimistic. He said the current caretaker government is a necessary step. "Yes they were part of the system," ElBaz. "But all of Egypt was part of the system. Where will you get people?" he asked. "You can't import people to do this. And they know where they stand. And they know someone is watching. "So all their mandate is we are going to keep the boat floating and we're not going to go in any direction. We'll just keep it afloat. We'll just keep it waiting here for the new passengers to come and take it out." But many of those new passengers are clamouring to board now.